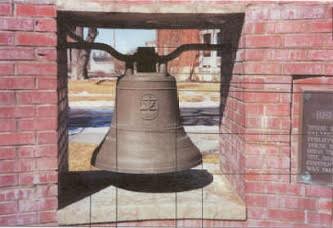 ONE OF two Balangiga bells at Warren Air Force Base in Cheyenne, Wyoming

THE RETURN of the San Pedro bell to the Church of Saints Peter and Paul in Bauang, La Union, on May 24 marked a historic moment:

Finally, after 115 years, a war booty had finally arrived home, rekindling hope that a similar gesture would be done for the three bells from Balangiga, Samar, that were also looted in 1901 during the Philippine-American War.

Dennis Wright, the retired American Navy officer who arranged for the return of the Bauang bell, had, in fact, expressed hope the same could be arranged for the more celebrated—and controversial—Roman Catholic church bells from Samar.

In his e-mail correspondence with Church art historian Regalado Trota Jose, who assisted in the research and return of the Bauang bell, Wright expressed hope that the Balangiga bells would be returned as well.

“We just have to hang on there and keep pressing on,” Wright wrote.

The e-mail correspondence was shown the Inquirer by Jose.

Three bells were taken as souvenirs from the church of Balangiga in Eastern Samar province. Two are at Warren Air Force Base in Cheyenne, Wyoming, and the other at a US military facility in South Korea.

All three have been subjects of repatriation requests for over two decades now. But there’s a tug-of-war between the Philippines and certain sectors of the US Congress on the matter.

Measuring approximately 27.36 inches in height and with a mouth diameter of about 34.84 inches, the San Pedro bell was cast in 1883 and named San Pedro. It was taken to the United States in 1901 by Gen. Thomas Barry who gave the bell in 1915 to the US Military Academy in West Point, New York, where he became its superintendent.

The 834-lb bell has the inscription typical of other bells in the country, which states the year it was cast, the parish priest at that time, and the donors who contributed to its making.

Taken to the US, the bell used to hang at the grounds of Most Holy Trinity Parish inside the military school.

Negotiations for the bell’s return to La Union started in August last year due to the efforts of Wright.

Wright had come to know of the San Pedro bell in the course of the research he and his group of retired offciers were making on the controversial Balangiga bells. He was corresponding with his friend Chris Estalillia, who incidentally was from Bauang, so he came to know the Ilocos bell. He later visited Bauang.

Historian Rolando Borrinaga and José also contributed in the process of repatriating the bell.

Borrinaga is a Balangiga bells expert. José, archivist of University of Santo Tomas, has extensively documented various bells in the country and written about them in his 2009 book “Bagting: The Valuation of Time and Memory in Spanish Colonial Philippines.”

Other prominent people who either helped or supported the cause included former Philippine ambassador to the US Raul Rabe, and West Point alumni such as former President Fidel Ramos and retired Gen. Narciso Abaya.

On April 29, the bell was rung for the last time at West Point alternatively by the parish priest, community members and Philippine officials, following a Mass officiated by chaplain Fr Matthew Pawlikowski.

It was unbolted, prepared and shipped back to Bauang, where a High Mass was officiated   by Bishop Rodolfo Beltran of the the Diocese of San Fernando, La Union, on May 24.

The Mass was followed by choral and band tributes outside the church, attended by hundreds of residents and visitors.

Wright and Mayor Martin de Guzman unveiled the bell. This was followed by its official ringing by Bishop Beltran, the first in 115 years in Bauang.

In his speech during the event, Wright said he initiated the repatriation “because it is the right and honorable thing to do.”

Wright also underscored the importance of the “interconnectedness” in the efforts made by various individuals, sectors and organizations for the bell’s return.

He closed his speech by mentioning lines from the poem “Meditation 17” by John Donne, which Wright said “reminds us that no individual, nor nation, is an island unto themselves, but rather we are all part of a bigger world community, and what affects one, affects us all.”

Part of the poem reads: “And therefore ask not for whom the bell tolls. For it tolls for thee.”

The Inquirer learned it was not the first time the United States returned bells owned by other countries.

Wright explained in his e-mail correspondence with José that a 15th-century Buddhist bell taken as a war booty in 1945 was returned to Japan by the United States Naval Academy and the Virginia Military Institute in 1991.

He added the bells of Saint Daniel, saved by American businessman Charles Crane over 80 years ago in Russia and donated to Harvard University in Massachusetts, were repatriated to Danilovsky Monastery in 2007.

With the return of the San Pedro bell to Bauang, José quipped: “Wright did the right thing.”

Author’s note: Thanks to Regalado Trota José of the UST Master of Arts Culutral Heritage Studies program and heritage advocate Rona Repancol for their assistance.