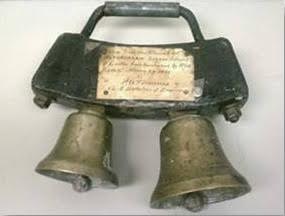 MEYCAUYAN bells, formerly in Nebraska, are now at the National Museum.

Before the San Pedro bell, two small bells, which had been taken by US soldiers after the bombing of a church in Meycauayan town, Bulacan, in 1899, were returned to the country in 2011 by the Sisters of Mercy of Omaha, Nebraska.

The bells were turned over in 2012 by Foreign Affairs Secretary Albert del Rosario to the National Museum.

It is not known how the bells ended up with the Sisters of Mercy.

Borrinaga said he knew of two Philippine bells at West Point Museum, one with the inscription “Pajo 1843.”

Jose told the Inquirer West Point was willing to return the bells but their provenance should first be ascertained.

Two bells are at Warren Air Force Base in Cheyenne, Wyoming, and the other is in a US overseas military facility in South Korea.

In a speech at Samar State University in February, Borrinaga said the repatriation request for the Balangiga bells started in 1994, during the term of President Fidel Ramos, with a high-profile campaign in 1997, just in time for the centennial celebration of the declaration of Philippine independence in 1998.

“Unfortunately the Ramos-backed campaign to have the bells returned in 1998 failed,” the historian said. “As June 1998 neared, it became apparent that the American side held a parallel, but also credible, version of the Balangiga story that contrasted with the Filipino version in almost every detail.

“As a result, the US side found sufficient justification to hold on to these artifacts. Although erratic in many aspects, the self-serving American version of the Balangiga story reached their politicians and served as basis for the filing of Senate Bill No. 1901, ‘A Veterans Memorial Physical Integrity Act of 1998,’ by the late Sen. Craig Thomas (Republican, Wyoming) in the US Congress.”

Borrinaga said what was obtaining now would be an impasse due to opposition by US veterans and government officials of Wyoming.

Borrinaga provided to the Inquirer synopsis of the essay written by US Navy veteran Dan McKinnon distributed during the recent Memorial Day.

In essence, McKinnon, who was backing repatriation, said the bells were not part of US Forces history and heritage and not the property of the American people. He stressed they were part of the Filipino cultural heritage and must be rightfully returned.