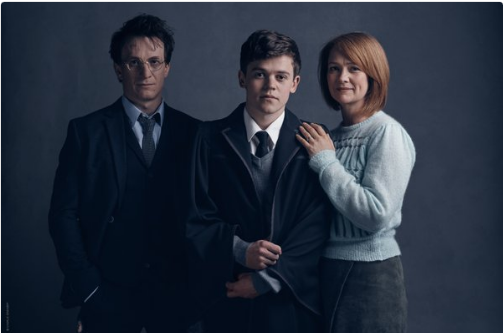 Harry Potter’s stage debut got a standing ovation from a packed theatre audience in a new London play that imagines the fictional boy wizard as a grown-up father of three, British media reported on Wednesday.

“Judging by the whooping and cheering, nobody was disappointed,” Clare Fitzimons wrote in The Mirror after the first showing of “Harry Potter and the Cursed Child” at the Palace Theatre.

“It was phenomenal, it really was. It lived up to all the hype,” said one fan interviewed by the BBC, while another in a Potter-style cape said: “This completely blew me away. J. K. Rowling did an amazing job.”

Potter creator Rowling made a special request for fans to keep the plot secret and the 1,500 audience members were handed badges reading “#KeepTheSecrets”.

“The storyline, a hymn to friendship and teenage misfits, contains enough twists to please the most knowledgeable of fans,” Hannah Furness wrote in The Daily Telegraph.

“Any fears that the world of Hogwarts on stage would struggle to compete with the multimillion-dollar special effects of film were quickly kicked into touch”.

“Has Rowling done it again? The audience was in no doubt,” she wrote.

The plot for the play reads: “While Harry grapples with a past that refuses to stay where it belongs, his youngest son Albus must struggle with the weight of a family legacy he never wanted.

“As past and present fuse ominously, both father and son learn the uncomfortable truth: sometimes, darkness comes from unexpected places,” it said.

The show officially opens on July 30 and is set to be published as a book on July 31, which is Rowling’s and Harry Potter’s birthday.

Rowling’s books have sold more than 450 million copies since 1997 and been adapted into eight films.

The show is written by English screenwriter and playwright Jack Thorne, based on an original story co-written with Rowling and the play’s director John Tiffany.

Given the millions of fans around the world, the decision to move the characters on two decades was seen as risky.

Like many of his fans, Potter has now grown up in the play and has three children with his wife Ginny Weasley, the sister of his friend Ron.

He is working at the Ministry of Magic.

He still has his trademark round-rimmed glasses and the scar on his head, a permanent reminder of his nemesis Lord Voldemort, but must now help his youngest son Albus confront the family’s dark past. TVJ