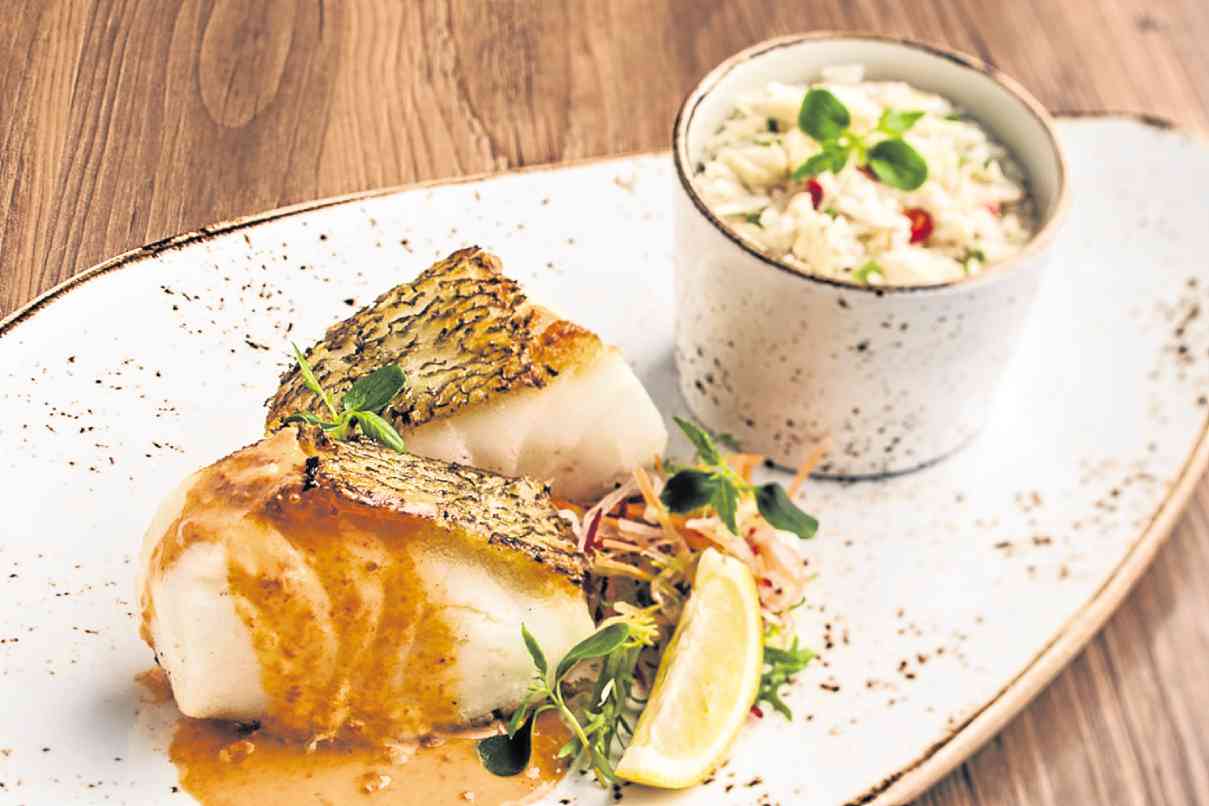 SEA BASS with a sauce of “talangka” roe and coconut cream

Even after retiring as director of Restaurant 9501, the executive lounge of ABS-CBN, Myrna Segismundo says she has never been busier. She’s been accepting work as consultant and doing cooking demonstrations around the country, the last one in far-flung Zamboanga.

But most of her time is spent joining Filipino food festivals here and abroad. She just ended her two-week stint as guest chef at the Diamond Hotel in Manila.

This week, starting today, June 9, till the 19th, she’ll be at Fiesta Filipino at The Peninsula Manila.

This time will be different, she says, from the previous four festivals at the same hotel—not the usual buffet style, but a la carte instead. And the venue will be at The Lobby, that grand area that distinguishes The Pen from any other hotel, where the sunburst sculpture by National Artist Napoleon Abueva never sets.

Six days before Fiesta Filipino, a preview was held at the Upper Lobby where an orchestra performs and where one can have a bird’s eye view of the busy Lower Lobby. People sat on Kenneth Cobunpue’s Yoda chairs and Chiquita stools, and the music of OPM classics including the Manila Sound wafted through dinner.

The bar served drinks mixed with lambanog branded as VuQo vodka, beers with local flavor and quirky names, and tame but oh-so-good fruit juices perfect for that evening’s muggy weather.

The appetizer of ensaladang ukoy ushered in the dinner. The crisp shrimp fritters gave the crunch to the salad of singkamas (jicama) and pomelo with a dressing of patis (fish sauce) and honey. It set the tone for the kind of food the guest chef produces—combining, refining and updating dishes but still essentially Filipino.

The soup was batchoy, the rich Ilonggo broth of pork with beef, noodles and chicharon (cracklings) added, but this one paired with a meat bun mimicking the puto pao of Bacolod. That was heavy.

Thankfully, the fish dish was quite light—sea bass with a sauce mixing talangka (shore crab) roe with coconut cream. When we wished for rice, it came.

At that point, having gone through cocktail offerings and several courses, it was reasonable that the roast prime rib— Segismundo’s version of bistek Tagalog—was served in small slices.

At the festival, an upscale version of tapsilog will be done using black Angus beef tapa, with the egg cooking described as 60 degrees—the way today’s chefs are doing it, and garlic rice. There will also be chicken pastel and Segismundo’s boneless lechon with red wine liver sauce and dried fruit stew.

Dessert at the preview was her signature queso de bola (Edam) cheesecake, but during the festival a chilled Marquesa de Chocolate will also be served, made with Malagos chocolate from Davao created by her friend, pastry chef Jill Sandique.

While Fiesta Filipino is part of Manila Pen’s Independence Day celebration, it also ushers in the hotel’s 40th-year festivities.

There are many of us who count The Pen as a memorable part of our lives—weddings, Christmas caroling, graduation balls, the launch of the “Kulinarya” book, countless intimate dinners.

There will be other events in celebration of the hotel’s ruby anniversary, like the opening of new suites, a wedding fair, the restoration of an Ang Kiukok collection. But equally important are its community projects, one of which is providing housing for the displaced in Tacloban.

Claude Tayag, like Segismundo, has also been promoting Filipino cuisine through his own restaurants and via food festivals abroad. His latest achievement is winning The People’s Award at the Embassy Chef Challenge, an annual competition among the embassies in Washington DC. This is the first time the Philippine embassy joined.

Cheers to another plus for Filipino cuisine. Who said we never get noticed?