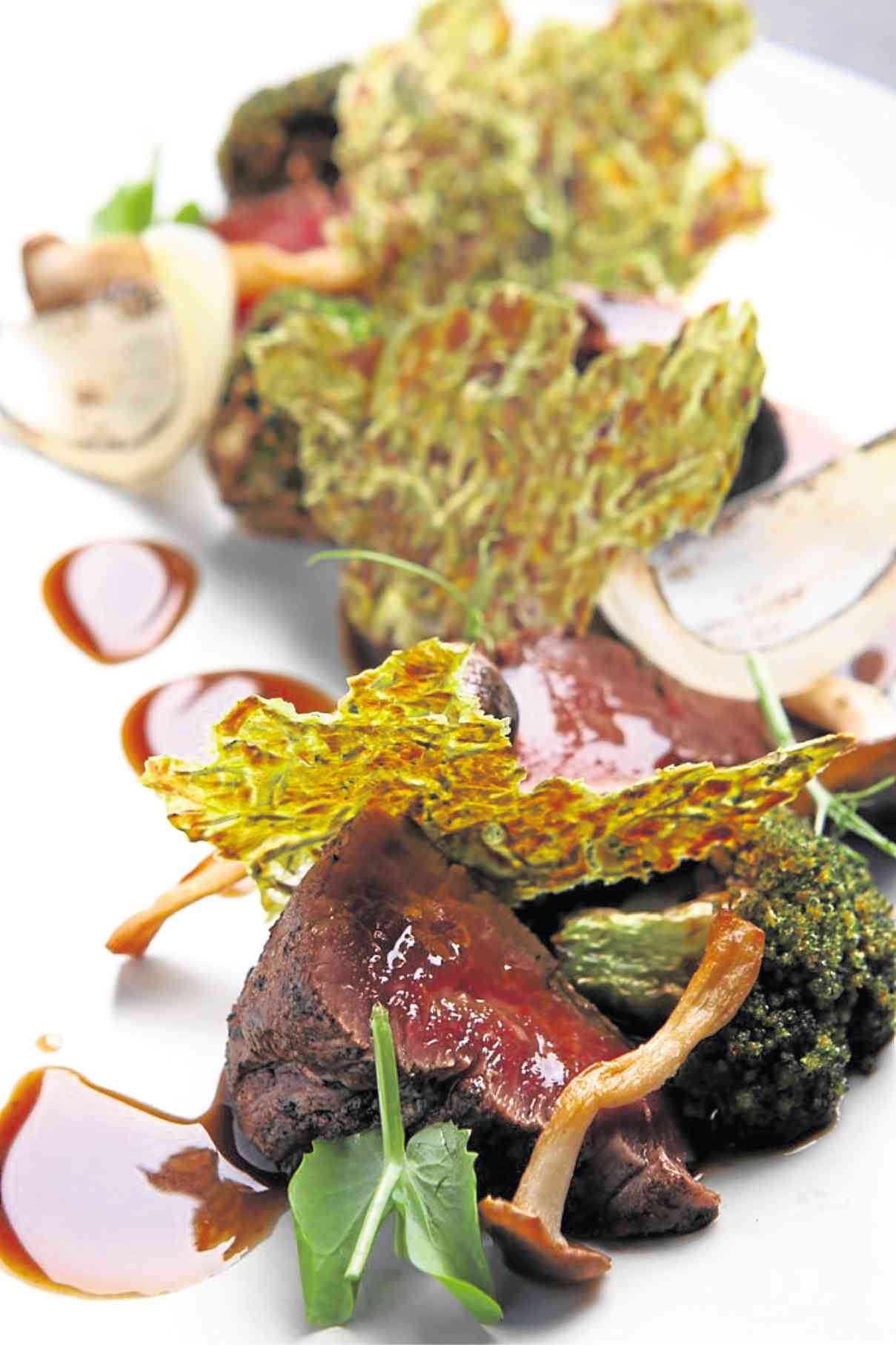 TLC is a reimagined version of beef with broccoli using Grade 6 Kitayama tenderloin and deep-fried and dehydrated broccoli flowerets.

Whoever said that the apple never falls far from the tree must be referring to Raphael Cruz, the 28-year-old son of the late great Larry J. Cruz.

Just like his father who pioneered well-loved dining concepts in the metro, the younger Cruz is also embarking on a similar career with the reopening of an all-new Black Sheep along Chino Roces in Makati.

While this Black Sheep isn’t really new—an earlier incarnation at BGC specialized in pricey menus for an upmarket—this one offers a different concept, fusion Filipino-Chinese, which is the brainchild of chef Patrick Go, one of the co-owners.

This time, diners can mix and match from a list of just 10 items—more dishes are coming—for their own unique experience.

Cruz said he didn’t plan on following his dad’s footsteps this early. He was set on doing corporate work when one of his partners, Jed Lim, talked about a quiet location in Makati City that could serve as Black Sheep’s new home.

The place is just a stone’s throw away from Don Bosco, and, after office hours, doesn’t get clogged in traffic, unlike busy dining locations such as Greenbelt and the Jupiter area.

And with a buy-one-take-one deal, it proved to be a steal. Not only did Cruz and company find a place for Black Sheep, they also opened Tunnl next door, a new hangout that serves standard bar fare and chill music till late in the evening.

“Black Sheep used to have CEOs coming in as guests. This time around, we are getting the  expat crowd as well as young diners since our menu is now more affordable,” Cruz noted. “This time we want to be open to younger people, people my age.”

Cruz admitted that the idea of fusion cooking might not be up his dad’s alley, but he wanted to try something else.

“Since we changed location, we wanted to do something very different,” he pointed out. “We were focused on elevating local ingredients, and we were inspired by local dining concepts. Now, we decided to be more flexible. The twist is to focus on being a black sheep. We want it to be different in a good way.”

The restaurant has an open kitchen setup that lets diners see up close how their orders are prepared, from the actual cooking and plating until the moment it is served.

The week we visited, a new dish had just been added to the menu. Sheep Jumps over the Wall is Go’s version of fried rice with 23 ingredients. You cannot possibly taste all 23, but the Chinese chorizo and pulled pork bits stand out. Overall it has an intriguing smoky flavor that fills the palate.

The chef informed us that he makes his own version of MSG using dehydrated mushrooms and other ingredients for that burst of umami. Sheep Jumps is inspired by the luxurious Buddha Jumps over the Wall soup, which uses as many as 30 ingredients and takes three days to prepare.

A dish called Two-Na Starters is inspired by the chef’s favorite childhood merienda: tuna and liver spread. Tuna from GenSan and chicken liver are blitzed together into a creamy paste spread on dehydrated slices of Chinese puto. The toppings of grapes and coriander add sweet and distinct contrast to the rich and slightly spicy spread.

Foie Long Bao is inspired by the traditional xiao long bao, although Go said he also looked at lumpiang hubad for inspiration.

The sliver of duck liver inside the dumpling skin is accompanied by xiaoxing broth that cuts down its richness. Each dumpling is just a mouthful, but as in most xiao long bao, care must be taken lest you burn your tongue from the steaming hot broth inside.

TLC is the restaurant’s version of beef with broccoli, although not in terms of flavor. The Kitayama Grade 6 tenderloin is seasoned lightly with five-spice powder for that subtle Chinese taste.

The dehydrated broccoli slice looks and tastes like a chewy chip, while the deep-fried floret tickles the palate.

Dessert is called Ice Candy for obvious reasons: A tube of avocado semifreddo is topped with shaved milk and served on citrus sugar and strawberry granita. This is Go’s homage to a summertime favorite. He is considering making the ice candy flavor reflect the season’s fresh fruits.

Cruz said many Black Sheep regulars hop over to Tunnl next door to end their night with a round of drinks. The bar serves classic cocktails—“all well-made and affordable,” he said. There are some single malt varieties, just enough to keep older guests entertained.

However, favorites here are the tacos that come in four variants—salmon is a favorite—and the steak that comes with a choice of seven rubs, including Tex-Mex,  Brazilian and Cajun.

The young restaurateur is taking it slow for the meantime after Black Sheep and Tunnl: “We want to make sure that this works out.”