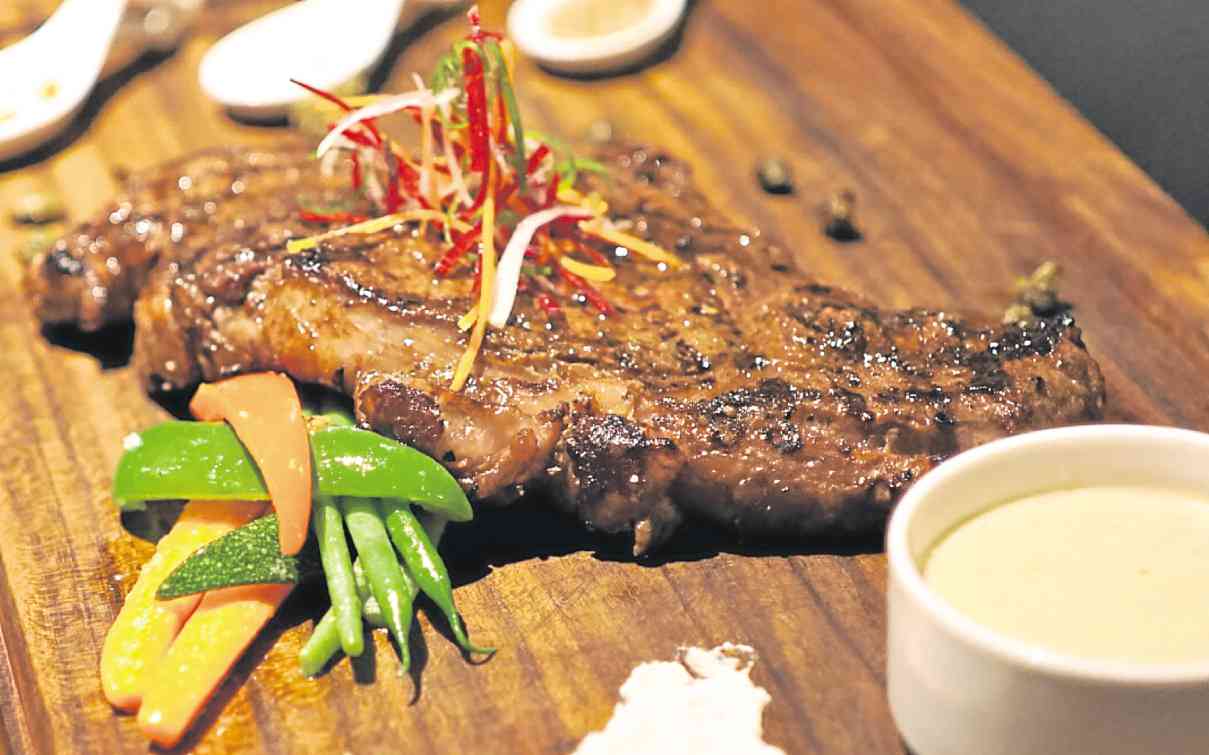 Not a date place–but it does steaks exceedingly well

For a week, when it feels like I’ve been steeped in the scene and thinking about food a lot, I fear there’s very little to report on the new restaurant front.

When I started writing in this space, it seemed like I was always playing catchup, and there was at least one new interesting restaurant opening every week, and sometimes several vying for one’s attention. The pace of new openings appears to have slowed down—perhaps because of the period of political transition that we’re in, but more likely because the gold rush is over.

Probably the most interesting thing I’ve done recently, as far as food is concerned, was to guest lecture at a UP class on Gastronomy. This has just come to the end, with the students’ final papers arriving in my inbox. And yes, you read that right: UP Diliman now offers classes on Gastronomy, under the Center for International Studies.

Interesting to note that the campus now has a pedestrian and bicycle lane around the Sunken Garden, which was miraculously free of the usual necking couples. And where there used to be a lone fishball vendor who sold snacks on the side, there are food trucks. Food trucks! With sisig fajitas!

But mostly, UP is still the same, a country unto itself, maddening and comforting at the same time. I taught at the Ateneo for four years and at UP for two, and have always enjoyed the contrast between the two neighboring universities, especially at the undergraduate level, and especially for specialist classes such as creative writing or food studies.

I was invited to lecture by Raymond Macapagal, who normally teaches the course. I decided to pitch the series of lectures as a socratic dialogue around the question: What is good food?

I was doing these guest lectures at the same time that I was writing my usual reviews for this newspaper—much of which is spent sifting through press releases and invitations to bar or restaurant openings, wine and whisky tasting, and dropping in on various social events. Very little, in fact, of what constitutes that day-to-day life of a food writer, especially a full-time one, has to do with that fundamental question: What is good food?

Because every review, every judgment that one makes, should ideally return to the corollary question: Is this good food or not?

Ironically, the more engulfed one gets in the food scene, the more difficult it is to make this judgment; and not just because one becomes friends with the chefs and it becomes more difficult to write a negative review.

The food world is going through one of its periods of relativism: genuinely good, honest, delicious restaurants are side by side with those whose raison d’être is to prove an outrageous egomaniacal point, with chefs merely playing with food and critics cowed into agreeing with their more expert colleagues, the ones who give out stars or rankings.

It isn’t as bad as the contemporary art scene, but it’s getting there. Amateur bloggers, for all their naïveté, are sometimes the ones most able to speak truth to power: I didn’t like it, it wasn’t delicious; the emperor has no clothes.

Lest you get the impression that I have been spending my time doing nothing but navel-gazing, I do have a restaurant recommendation for you. It’s a bit of a rerun in the sense that I’ve reviewed this place before; but enough time has passed, and it has recently finished an intensive renovation.

Prime 101 had the problem of being a steak restaurant that felt like it was squatting in a furniture showroom, but the food was good enough that patrons put up with the bizarre surroundings and terrible acoustics.

Post-renovation, it finally looks like a restaurant; and it has draped floor-to-ceiling walls of cloth that do a good job of absorbing reverberations in the room. There’s a pretty bar, the toilet is now in a more logical place, but the number of seats has remained more or less the same—which is a good thing, because without the unexpected settee or lamp that you had to navigate around or hurdle over, the tables are now spaced well apart.

It’s still not what most would consider a date place; there aren’t candles or flowers or violinists, but I like it for that. It’s a cozy, well-lighted place and it does steaks, whether US Prime or the more exotic Matsusaka beef, exceedingly well, with the timing done just right and a good char on the outside.

Other places might have more fancy sorcery surrounding the aging and the provenance of the meats, or brand-name recall, but despite the intimidating prices for the higher-end cuts, this is actually one of the better bargains among the steak restaurants in the current scene. The two guys who run the place—both of them of a reassuring size that tells you at once that your steak is in good hands—are hands-on and can guide you through the menu.

I personally wouldn’t bother with a first course; the cuts of steak are more than any sane person should eat in one go.

I had a good meal. I liked my steak—both at the restaurant, and with my family, with whom I had the other two-thirds of it the next day. I thought it was good.

But does that make it good food? What is good food, anyway? For that, you’ll have to sign up for GS197.