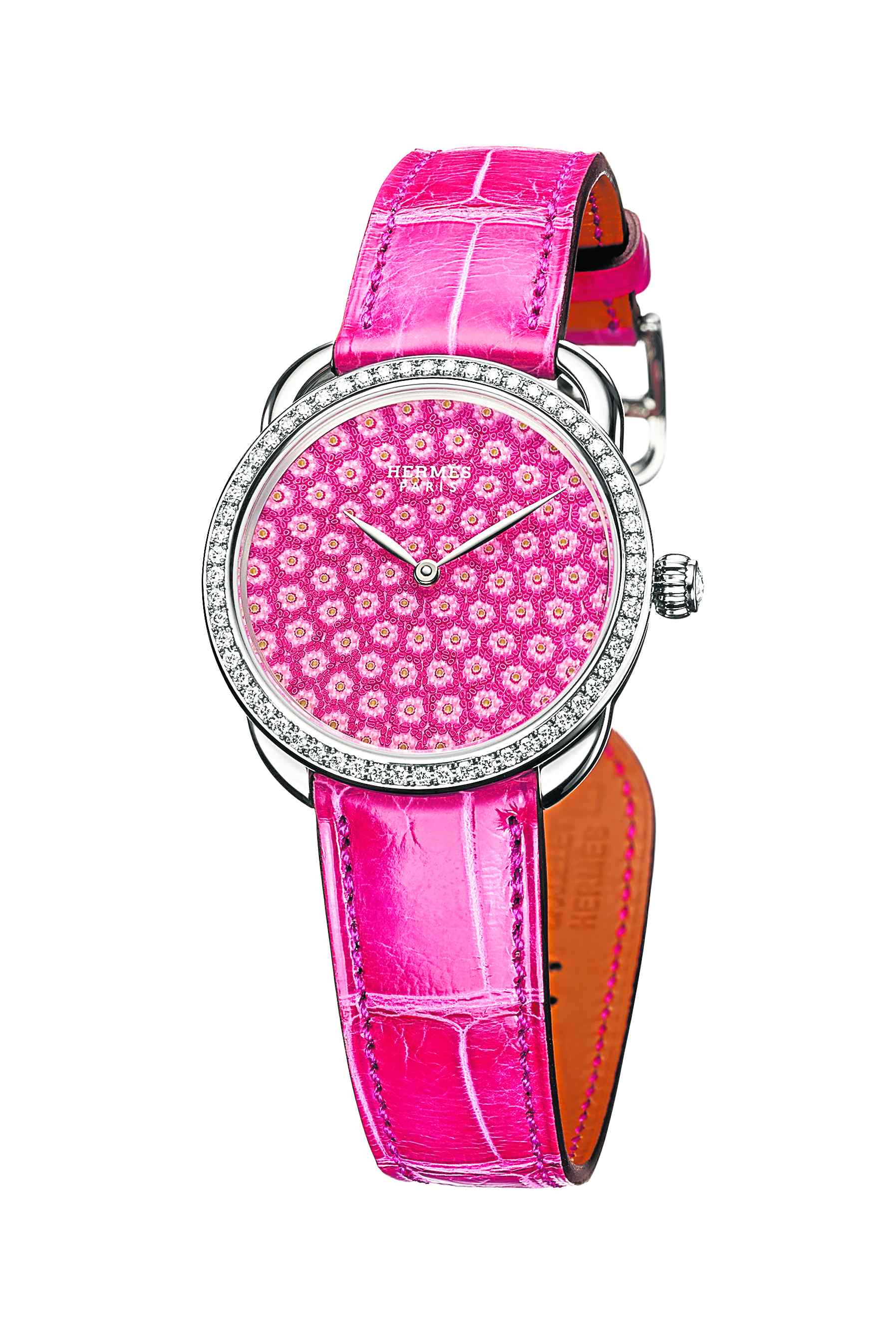 HERMÈS Arceau Millefiori with diamonds and an alligator strap

Hermes’ new watches are crystal, enamel works of art for your wrist

Enameling, engraving and crystal-making are just a few of the age-old artisanal crafts that Hermès—primarily known for exceptional leather craftsmanship —employs in its latest collection of timepieces.

Slim d’Hermès Émail Grand Feu, presented at Baselworld 2016 and shown to us recently at a private viewing at the La Montre Hermès offices in Singapore, is the embodiment of a modern classic—an ultra slim (2.6-mm thick), round rose-gold dial (39.5 mm in diameter), and runs on the ultra-thin Hermès H1950 movement. It features a bright-white enamel dial, with custom-designed typography for the hour markers.

The watch, a follow-up to the Slim d’ Hermès launched in 2015, comes with a matte Havana alligator strap, in a limited numbered series of 100. Like its predecessor, it’s being positioned as the Hermès staple—both elegant and wearable for   any occasion.

“Émail” is the French word for enamel, and has nothing to do with the typical workings of so-called smartwatches, and “grand feu” translates to “great fire,” pertaining to the arduous and masterful technique involved in achieving the shiny, extremely white enamel of the dial.

The process starts with a copper disc rubbed to just 0.2-mm thick. It’s brushed with a “highly inflammable” material, and then a thin dusting of glass powder—a secretly guarded composition—is applied before it’s fired in a kiln at 830°C. It becomes enamel as the molten glass powder solidifies on the disc. The coating, dusting and firing are repeated up to six times.

The Arceau Millefiori, meanwhile, marries horology and the art of crystal-making, as Hermès partners with the artisans of its sister company, Cristalleries royales de Saint-Louis, to adorn the dials of its Arceau women’s wristwatches and pocket watches. The designs are inspired by the 19th-century paperweights created by the latter.

Millefiori means “a thousand flowers” in Italian. Colorful molten crystals are formed into tiny canes, which are cut into 10-mm pieces, and pieced together by hand to create a floral pattern for the watch’s dial. It comes in 34-mm and 41-mm models for the wristwatches, while the front cover of the pocket watch bears the Millefiori design.

At Baselworld, Hermès also showed the Arceau’s expanded collection, including the 36-mm model with and without diamonds. It comes with several choices of colored leather straps.

One of the highlights of the Arceau line is the Arceau Tigre, which uses the shaded enameling technique on the dial. There’s also the cuff jewelry women’s watch called Faubourg Manchette Joaillerie, which showcases Hermès’ legendary saddlery tradition in the leatherwork.