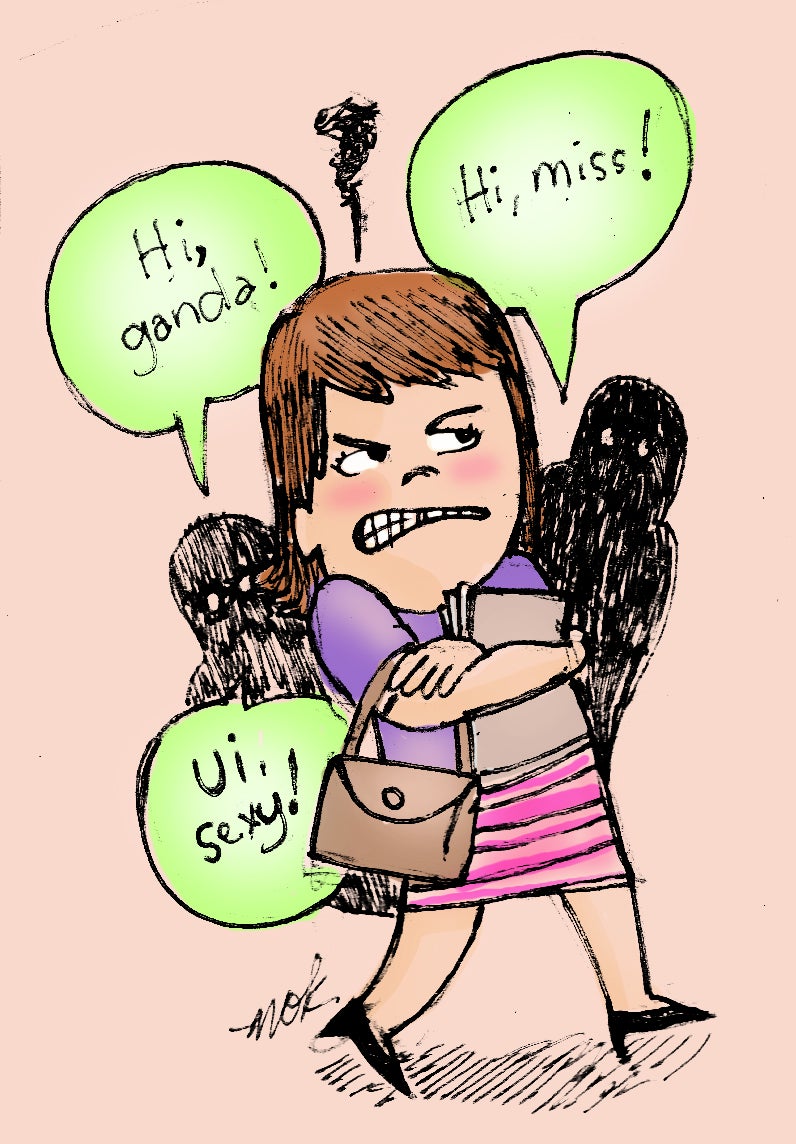 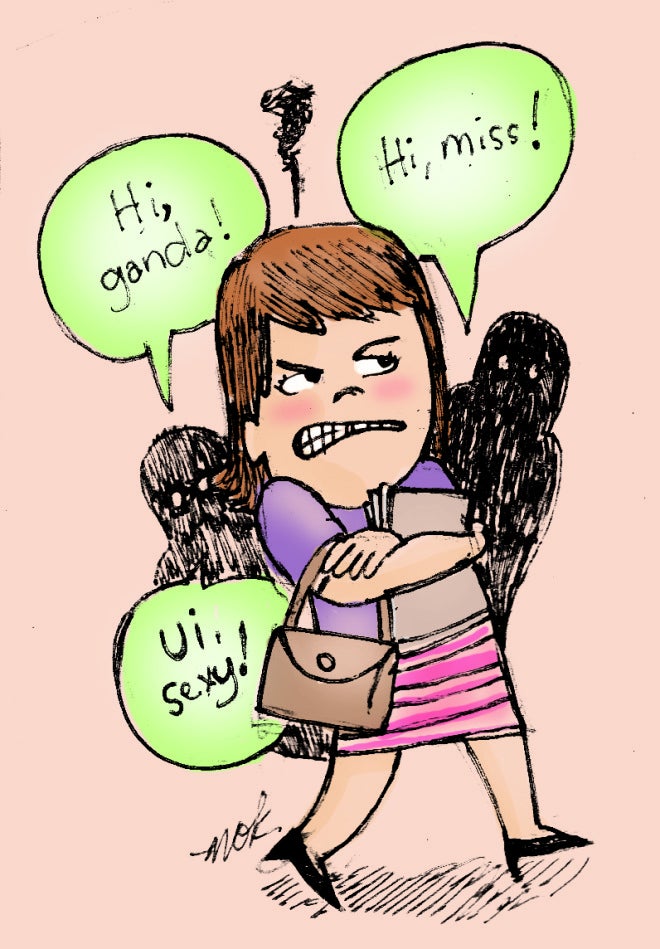 A few years ago, I witnessed perhaps one of the worst incidents of verbal sexual harassment.

A new house was being constructed next door, the building higher than my family’s single-floor bungalow. It was nighttime and the workers were having a bit of fun—at the expense of my household.

They were wolf-whistling at and making a live show of our kasambahay who was in her room, visible through the windows to the men perched about two floors above us.

I knew because I heard their voices from my room, which was adjacent to ate’s, and because the poor woman got so scared she shut off the lights in her room and crawled her way to mine.

I called the police, who responded immediately, but all they could do was ask the men if they had indeed disturbed our peace. The officers told me it was a matter to be sorted out only at the barangay level.

That the incident took place while we were home, supposedly the best place for us to feel safe and secure, made me determined not to let them off so easily.

I had members of the barangay tanod haul off the workers—all of them—to the barangay offices for interrogation. We spent the night there and, by sunrise, nobody had confessed.

The men were released because they all sang the same song of innocence, while I drove home groggy from lack of sleep and exhausted from the rage I felt at being awfully disrespected by a bunch of people who didn’t know better.

Eventually, an encounter with the new homeowners revealed that they thought I threw accusations on a whim, and that I just wanted to make a fuss.

Since I was young, I have always been told to ignore catcalls. “They don’t know any better,” the adults repeatedly said of the perpetrators.

So, I heeded the piece of advice. I ignored the poor ignoramuses who blatantly stared and wolf-whistled. When total strangers hollered monosyllables or creepy greetings my way, looking daggers at them was out of the question.

Were they joking? Was it funny? Was I amused that I was attracting unwanted attention? Of course not.

Coming from one guy, it was annoying; from a group of them, it was unnerving.

It didn’t matter if I wore pants, a skirt or a pair of shorts, whether I had on the school uniform or plain clothes. I could be on the other side of the road or waiting at a commuter stop.

There’s no specific place, but I expected it from areas where laborers and unemployed bystanders congregate, such as construction sites, PUV stations, sidewalks fronting girly bars, convenience stores or carinderia.

Was I elitist? If I were, it still did not justify being made to feel as if I were a pet called to sit on somebody’s lap so they could toy with it.

I could be an elitist who chooses to not shout out loud, “Hey, dude, brush your teeth because the caveman look has long gone out of style.”

I could be a feminist yet refuse to say straight to your face, Mr. Weirdo, that perhaps your income is as small as your weiner. (Believe me, there are many creative ways to express these thoughts in Filipino, but since we’re being so morally upright these days, let’s keep the language safe for print publishing.)

If it was just about admiring how I looked, it could have been done with the same amount of self-control I’ve exercised toward catcallers.

In my teens, I was gangly, pimply, bushy-browed and long-haired like Sadako. I hid my disproportion—a flat chest on top and legs as thick as logs on the lower half—in clothes as baggy as those worn by MC Hammer.

There was nothing exceptional about me. But catcallers don’t need their prey to look exceptionally anything. They just need somebody to pick on, period.

Unfortunately, it’s my gender that’s been the favorite target. Women are thought of as weaklings, physically and mentally inferior and thus cannot fight back.

In the wake of the recent controversy about catcalling as freedom of expression, a Filipino woman(!) sent a smart-alecky tweet to a local broadcaster, whose wife was the recent object of “admiration” by the President-elect, telling him that he should make his spouse “stay home and be a wife.”

I thought that in these modern times, I would no longer encounter any form of verbal sexual harassment equal to or worse than that infuriating night of years ago, and yet only last week, two viral Facebook posts proved me wrong.

The first was a screen grab of a Facebook status of a young Filipino woman who shared her experience of being howled at with “Psstoi! Ate Blue hair” and “Hi, miss, pa-kiss.”

“Harassment yan,” she fired back at the wolves.

They actually had the gall to say she should’ve been flattered in the first place. Based on her account, it seemed they were inspired by the President-elect, from whom they got the idea that there’s nothing wrong about appreciating a beautiful woman.

And, boy, did those guys show how much they admired her beauty. “Sarap mong pa-rape. Hindi makuha sa joke,” they told her, laughing.

The entire post was taken down, prompted by reports by those who believed it to be black propaganda for the new highest official in the land.

The next viral post, which came from the same woman, explained her brief absence online.

“I talked about my experience through a post ON MY WALL…

“I’m sorry for using YOUR hashtag (#changeiscoming), maybe that’s the reason why the hate was so resonating, but I cannot accept the fact that MY personal experience was negated by the fact that I am fat.

“The majority of the hate mail concentrated on the fact that I am fat and that I ‘did it all for attention.’ That I am an ‘ilusyunada’ because people will never cat-call me because of how I look. That what I posted on my profile was black propaganda. That I was brainwashed by Yellow enough to not see Red. That no one will ever think of raping me because I am fat…”

The Facebook status also expressed her disappointment at receiving hate mail mostly from women. “To quote one woman: ang mag-r-rape lang sayo ay kawayan. (She thinks this is witty because of the suckling pig reference, I suppose).”

For somebody who has just been harassed, insulted and bullied so much, the woman still ended her post with encouraging words for us.

“Maraming salamat sa mga message niyo ng suporta, patawa, at minsan, concern. It really puts a lot of things into perspective, but I can’t help but still try to be positive about the future of our country. Kapit lang.”

To you Who Cannot Be Named as well as all the other victims of verbal sexual harassment, I raise a fist as a sign of support and solidarity.

Do not allow yourselves to be shamed and bullied into burying the truth about your experiences. Those catcallers, the ones who harassed you, were not so naïve—they knew the possible impact of their words and actions.

We no longer live in the Dark Ages. Ignorance can no longer be an excuse for hurting women. And one man, who by the way already wields so much power, should not be the reason to hurt your fellow Filipinos.