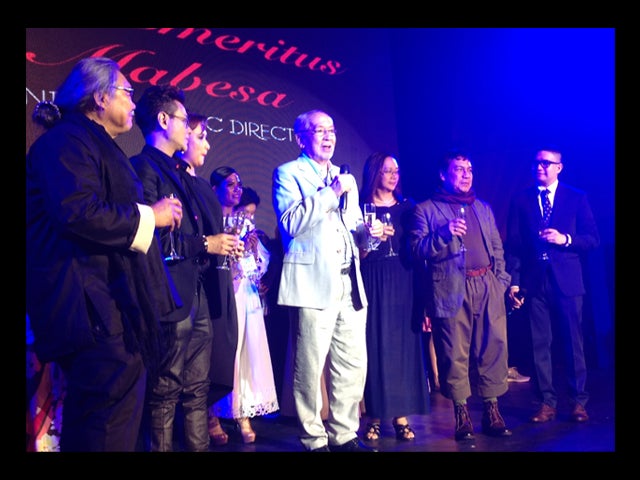 Dulaang UP founding artistic director Tony Mabesa (center) leads the toast at the end of the “The Big Four-O: A Reunion Dinner & Show For The Benefit of Dulaang UP,” with (from left) Alex Cortez, RS Francisco, Ayen Munji-Laurel, dean Amihan Ramolete, Anton Juan and Dexter Santos. The benefit gathering was attended by several generations of DUP veterans dressed to the nines, with Floy Quintos directing the program. ALL PHOTOS BY ALYA B. HONASAN

They all came home for the love of the theater

It was a stellar gathering of people who had made their marks in the performing arts. There were directors like Joel Lamangan, Chito Roño, Rico Gutierrez and Andoy Ranay, dancer Paul Morales, playwrights Dennis Marasigan, Chris Martinez and Nick Pichay, singers and actors Pen Medina, Ces Quesada, Eugene Domingo, Frances Makil-Ignacio, Bituin Escalante, Franco and Ayen Munji Laurel, and many others, as well as friends and supporters.

What they have in common is a love for the theater—and having performed, at one time or another, on the stage of the Wilfrido Ma. Guerrero Theater, home of the Dulaang Unibersidad ng Pilipinas or Dulaang UP (DUP), the university-based theater company that has brought professional actors and talented university students together, performing Filipino and foreign classics as well as contemporary originals for the UP Playwrights Theater.

The two cochaired a 40th anniversary reunion that doubled as a fund-raiser, held last June 4, Saturday, at Ang Bahay ng Alumni at the UP Campus.

“The Big Four-O: A Reunion Dinner & Show For The Benefit of Dulaang UP,” as the formal event was called, was attended by several generations of DUP veterans dressed to the nines—led, of course, by resident mentors Tony Mabesa, Alexander Cortez, Anton Juan and other faculty members, including dean of the College of Arts and Letters Amihan Ramolete.

Greatly missed were late professor and costume genius Ogie Juliano, director Behn Cervantes and others colleagues who had passed away.

Bituin Escalante regaled the crowd with the songs “Broadway Baby” and “I’m Still Here,” with customized lyrics, full of references to DUP jokes, including Mabesa’s favorite expressions. There were speeches and memories from Alex Cortez, batchmates Frances Makil-Ignacio and Eugene Domingo, and DUP’s artistic director Dexter Santos, and more musical numbers from a host of leading men, Ayen Munji-Laurel, and the younger DUP generation, including Teetin Villanueva.

Director and playwright Floy Quintos ran the show from the lights booth. After a sumptuous dinner, loads of selfies and a raucous family picture, the open bar and DJ got everybody dancing and hamming it up for the photo booth.

Santos announced significant earnings from the night’s ticket sales and contributions—enough to kick-start rebuilding, as well as helping fund DUP’s next production. As they say in the theater, the show must go on—and how.