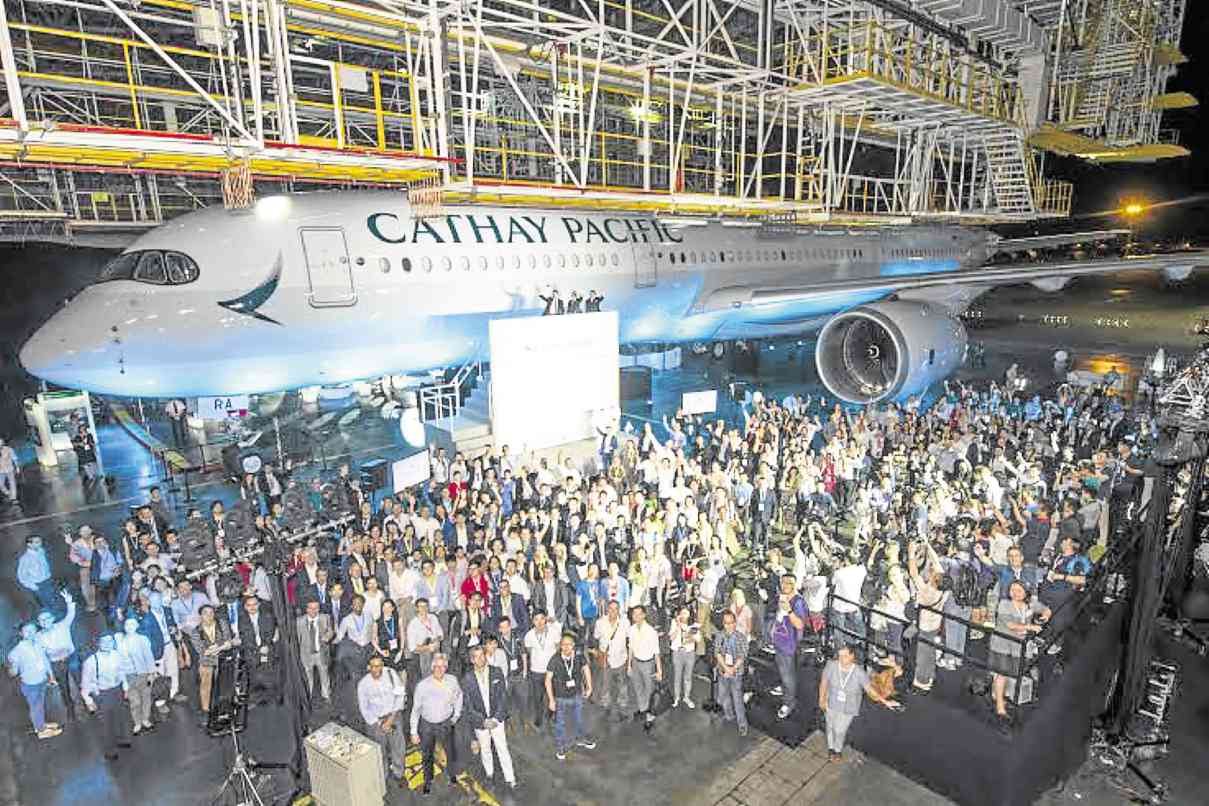 CATHAY Pacific staff and guests pose in front of the airline’s first A350 plane.

History repeats itself with new aircraft

CATHAY Pacific made history repeat itself when it sent to Manila the newest addition to its fleet, the Airbus A350-900 XWB  (extra wide-body), on its maiden commercial flight.

The 70-year-old company’s first commercial flight as a Hong Kong-based passenger airline was also headed to Manila on Sept. 24, 1946.

The A350-900 XWB, Cathay Pacific’s new pride and joy that touched down in Manila at 9:45 a.m. on June 1, is a very modern aircraft configured to meet the needs of a techie generation that can no longer live without laptops, tablets, smartphones and whatever new gadgets will be rolled out, and who have gotten used to touching icons on monitors to communicate.

It also addresses the growing need for connectivity anywhere, anytime. The aircraft is likewise designed to be more environment-friendly.

In simple ceremonies held at the hangars of the Hong Kong Aircraft Engineering Co. Ltd. to launch the new plane, Rupert Hogg, Cathay Pacific chief operating officer, noted the “great innovative features” of the Airbus A350-900 XWB. The airline has ordered 48 of the French-built aircraft, expected to be delivered this year until 2017.

Hogg said, “The superbly efficient aircraft (A350-900) will help us further expand our global network and strengthen Hong Kong’s reputation as an international aviation hub, helping to oil the wheels of commerce trade in our home city.”

Describing the A350-900 as a “leaner and greener aircraft” and a game changer, Hogg said it would benefit the environment, customers and Hong Kong, adding that it also came with an array of brand new in-flight products.

Keynote speaker Joseph Lai, Hong Kong’s permanent secretary for transport and housing (transport), congratulated Cathay Pacific on its new acquisition, pointing out the company had come a long way from being an airline of just one aircraft to being among the world’s biggest, reaching over 100 destinations.

He said the airline’s latest initiatives represented Cathay Pacific’s vote of confidence for the aviation industry and its home base, Hong Kong. The airline’s continued expansion and modernization of its fleet meant Hong Kong was “better poised to avail of opportunities” for growth and development, he noted.

Cathay Pacific’s new aircraft is meant to help the airline deliver on its promise of a “Life Well Travelled.” Robert Taylor, head of Cathay Pacific A350 project, said the new aircraft was designed “for passenger comfort and well-being.”

New in-flight products are introduced in all sections of the aircraft, which is configured in a three-class layout—Business, Premium Economy and Economy cabins.

Innovative features have been added to make sleeping easier and more comfortable for passengers in all classes. A lower cabin pressure reduces the discomfort of high altitudes. The state-of-the-art Rolls Royce Trent XWB engines are not only 25 percent more fuel efficient, which make them very environment-friendly, but also much quieter.

Taylor added that the A350 would have better air quality and highly efficient filtration system, among other things.

Premium Economy and Economy classes seats will have dedicated tablet holders to make it more convenient for passengers to use and enjoy their own digital devices. Exclusive power outlets and USB ports are also provided.

Passengers who prefer the airline’s entertainment lineup will have individual interactive user interfaces and wider screens. 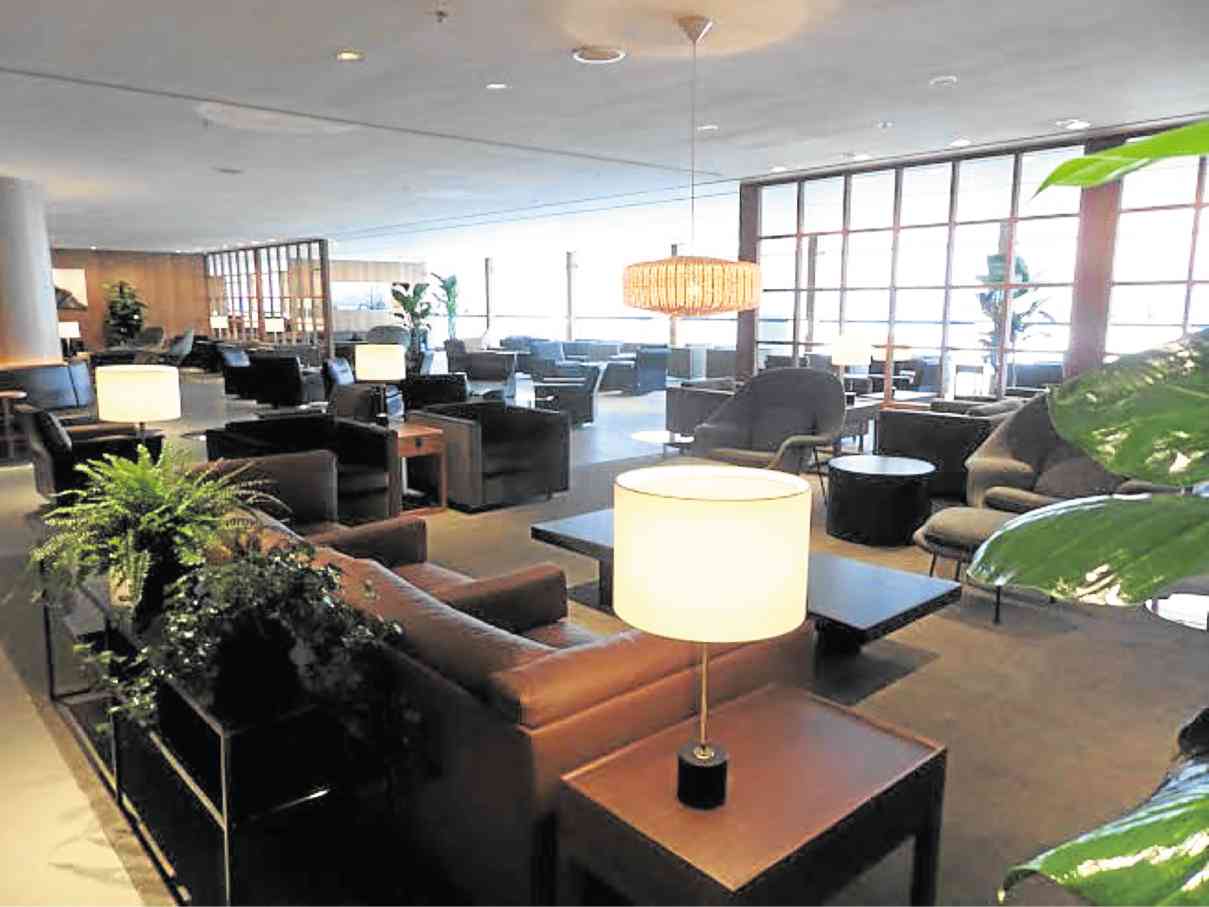 For the first time, passengers will have connectivity—for a fee—even when flying at 30,000 feet. They can browse the internet, send and receive e-mail, and connect with friends and family on social media.

The aircraft reduces its carbon footprint by using sustainable aviation biofuels. Cathay Pacific’s A350-900 fleet will fly from the factory in Toulouse, France, using fuel containing a 10 percent blend of biofuel.

Fuel efficiency is also increased by the use of advanced high-strength but lighter materials that lower fuel burn but are highly resistant to corrosion and metal fatigue. Greater fuel efficiency will mean less emissions.

James Tong, Cathay Pacific director for corporate affairs, said the A350-900 would initially fly to regional destinations, including Manila. Its first European destinations would be London, United Kingdom, and Dusseldorf, Germany.