Message in a bottle | Inquirer Lifestyle 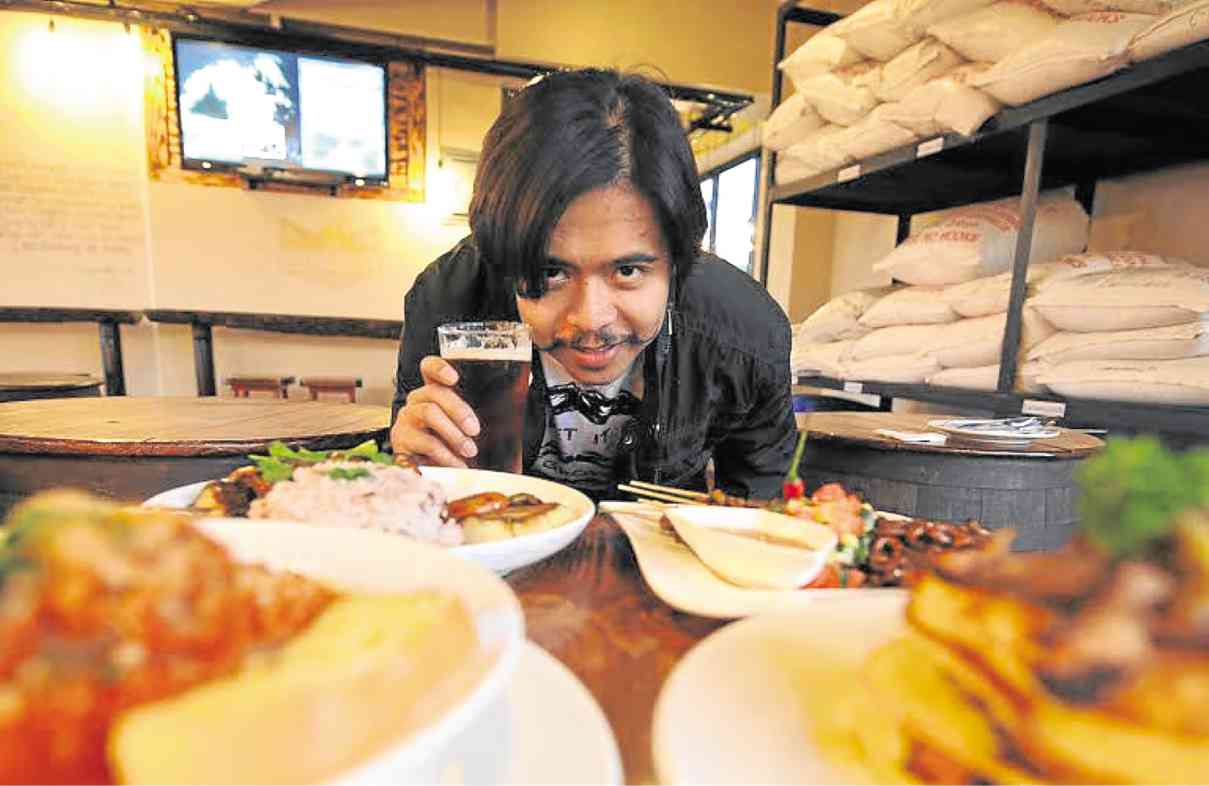 ED BUSTOS of Amare La Cucina fame developed the food menu of the brewery. He’s also one of the partners. PHOTOS BY EV ESPIRITU

Message in a bottle

Fill with mingled cream and amber,

I will drain that glass again.

Through the chambers of my brain.

Come to life and fade away.

What care I how time advances?

I am drinking ale today.

THIS poem by the morose Poe greets people entering the bar of Baguio Craft Brewery.

You are induced to order a hearty glass of the Stout Crusader. One of the most popular beer variants in the place, it is best paired with beer-infused isaw whose plating, under the supervision of food guy

Ed Bustos, has elevated it from the ranks of tusok-tusok street food to classy beer match.

Now on its second year, the Baguio Craft Brewery is the brainchild of former Baguio resident Chris Ordas—himself a beer drinker, and a traveler to countries with a beer-drinking culture like Belgium, Germany and the United States West Coast.

He first set up a brewery in his garage in Edmonton, Alberta, Canada.

Each time he comes home to the Philippines, he is frustrated with how the local scene is dominated by commercial beers. On his decision to open a brewery in his home city, he said: “I thought that it would be good for local tourism and the food culture here since craft beer is considered the new wine. We pair a lot of food with it.”

He defined craft beer as possessing the “true touch of the purity law of beer-making. It’s natural, it has no preservatives, no chemicals like stabilizers.”

With a craft brewery, he and his staff can brew a lot of beer varieties or flavors, including fruits in season like strawberry, passion fruit and kiwi.

Ordas has even made wild honey beer, as well as beer extracted from the flavors of Sagada oranges and Benguet coffee beans. He has concocted 42 varieties thus far. On the drinks menu, 16-18 rotate at any given time.

Because everything is handcrafted and the brewing process does not rely on big machinery, he pointed out: “Our beer is like lutong bahay (cooked from home).”

The brewery is his way of “giving back to Baguio.” He lived here from 1970 to 1992 before migrating to Edmonton. Today he enjoys dual citizenship.

What he and three other partners, including Bustos, have done is historic.

Ordas said theirs is the “first micro-brewery of this size in the Philippines. We can accommodate 80 to 120 at the Biergarten on the roof deck.”

Their customers are young professionals, expatriates and people from Manila “who come up for a beer or make us their first stop while in Baguio,” Ordas said. He added that when  the brewery first opened, “we went viral! Social media helped. We’re on Facebook, Instagram and Twitter.”

Despite the range of alcohol content in their beer, there has been no incidence of brawls or shouting matches. “It’s why people like it here—it’s cozy. Many of our customers are women,” said Ordas.

Serving beer in cans is encouraged. “In Northern American and Europe,” Ordas noted, “it has been found that beer tastes fresher and better in cans than in bottles.”

As part of the passion and contribution to the ecologically minded community in Baguio, the brewery’s takeout bag is made of burlap while the beers are named after figures in Cordillera tales like Bugan, Kabunyan, Daya, Lagud and Dalom.

While drawing up the food menu, Bustos became a beer convert. He also discovered “how beer and food can go well together. I go to market every day to keep everything fresh.”

One of its top-selling beers is named Message in a Bottle. It is an India pale ale with 7.6 percent alcohol. Bustos explained, with a smile, “When you finish the bottle, that’s when you get the message.”