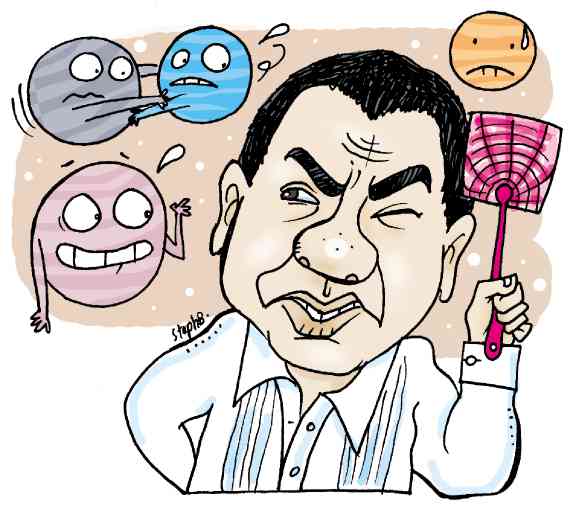 Regardless of a new President, the Philippine economy will flourish, further reaping the fruits of the past six years. This will be obvious in service-oriented industries dealing with foreign countries such as overseas Filipino workers, business process outsourcing and the foreign investments.

The sustained economic growth is a reward from the universe, said an astrologer who requested to be unnamed. The Philippine 2016-17 chart is based on its independence date of June 12.

The country’s development in the past six years also coincided with the luck brought by President Aquino. His chart indicates a Fortuna Major, a symbol of “greater fortune.”

Yet, despite the glowing economic reports, majority did not feel the trickling effect of the wealth. The prosperity must be handled properly or else the economy will collapse, said the astrologer. Hence, the Philippines will have to get down to brass tacks.

Saturn, the planet of harsh reality check, will be in Sagittarius, the planet of law and order, until December 2017. Their energies are opposing the country’s beliefs and mission. This explains the atmosphere of uncertainty. Saturn’s “by hook or by crook” influence will make changes.k

In the next two years, President-elect Rodrigo Duterte’s leadership will either be consequential or challenging. The world will be watching the Philippines.

Leaders must learn to adopt to the administration without compromising their vision and values. Otherwise, those political turncoats and sycophants will be rendered “decorations.”

The astrologer also pointed out that a younger politician, born with political pedigree, will emerge to enforce some order by using his intelligence and not violence.

By the middle of 2016, the energy of Pluto, the planet of power and regeneration, will easily express itself, particularly in the area of personal transformation and other people’s resources.

Its association with Jupiter, the planet of optimism and expansion, allows determined Filipinos to achieve their goals despite obstacles.

Pluto and Jupiter, the ruler of foreign countries, link with the Moon, which governs public life, and will bring more recognition to Filipinos abroad. Over the years, Filipinos have been recognized by the world for their generosity of spirit, enthusiasm and artistry. This year will bring rewards for these virtues. It also indicates foreign investments coming to the Philippines.

Although the country will be mired in crises, Pluto’s influence makes Filipinos resilient. Some activities that have been carried out in secret will bring sudden upsets. Nevertheless, Filipinos possess great strength to overcome them at the last minute.

One of the most turbulent planetary influences, the tension between Pluto and Uranus, the planet of sudden changes, ended last year. However, its effects still linger. The passage of the two planets heightened terrorist activities. Although there are threats to peace and order, people will be smarter in preventing or controlling them. As a result, more foreigners will visit the Philippines, without any fear.

Then again, expect more violence such as extrajudicial killings as the energies of Saturn, the planet of discipline, and Mars, the planet of war, are not in harmony.

While Pluto is empowering the country, Neptune, the planet of illusion, is playing tricks on the Moon, which also governs home, real estate and property. Although the new developments or the promise of new mixed-use centers seem very attractive, the industry will be challenged in sustaining them. Developers and property owners will have to confront Saturn’s restrictive impact.

In management, the illusory energies of Neptune will stress relationship problems born out of deception, weak leaders, indecision and the inability to handle people. As a result, people in these situations will not gain loyalty and trust from their constituents.

Neptune also dominates the house of power and influence. It clashes with the energies of the Moon and Jupiter, both indicators of wealth. Hence, expect more news of mishandling of funds and scandals of people in power.

The expansive nature of Jupiter as it links with the North Node, the area of the effects of past action, brings out overeagerness and quick wheeling and dealing. Hasty transactions done without much study or evaluation can bring quick results but equally fast downfalls.
With Saturn, the planet of restriction, up against the Moon, the symbol of emotions, and Jupiter, Filipinos must work harder than usual to overcome negative attitudes that can aggravate their situation.

Then again, effects of Venus, the planet of love and artistry, and Uranus, the planet of expanding consciousness, will make Filipinos creative, tolerant, sympathetic and humanitarian. These traits make them very attractive to others. There will be opportunities for growth in areas that use creativity and innovation.

Pluto’s harmony with the North Node means that the crooked personalities will undergo transformation.

With Pluto influencing the Moon, the symbol of the environment, Filipinos have the ability to revitalize in their lives. Moreover, their concentration and positive attitude can influence the atmosphere.

People will be interested in working on themselves through self-help books and programs, and meditation. They will realize the truth in, “No effort, no luck.”