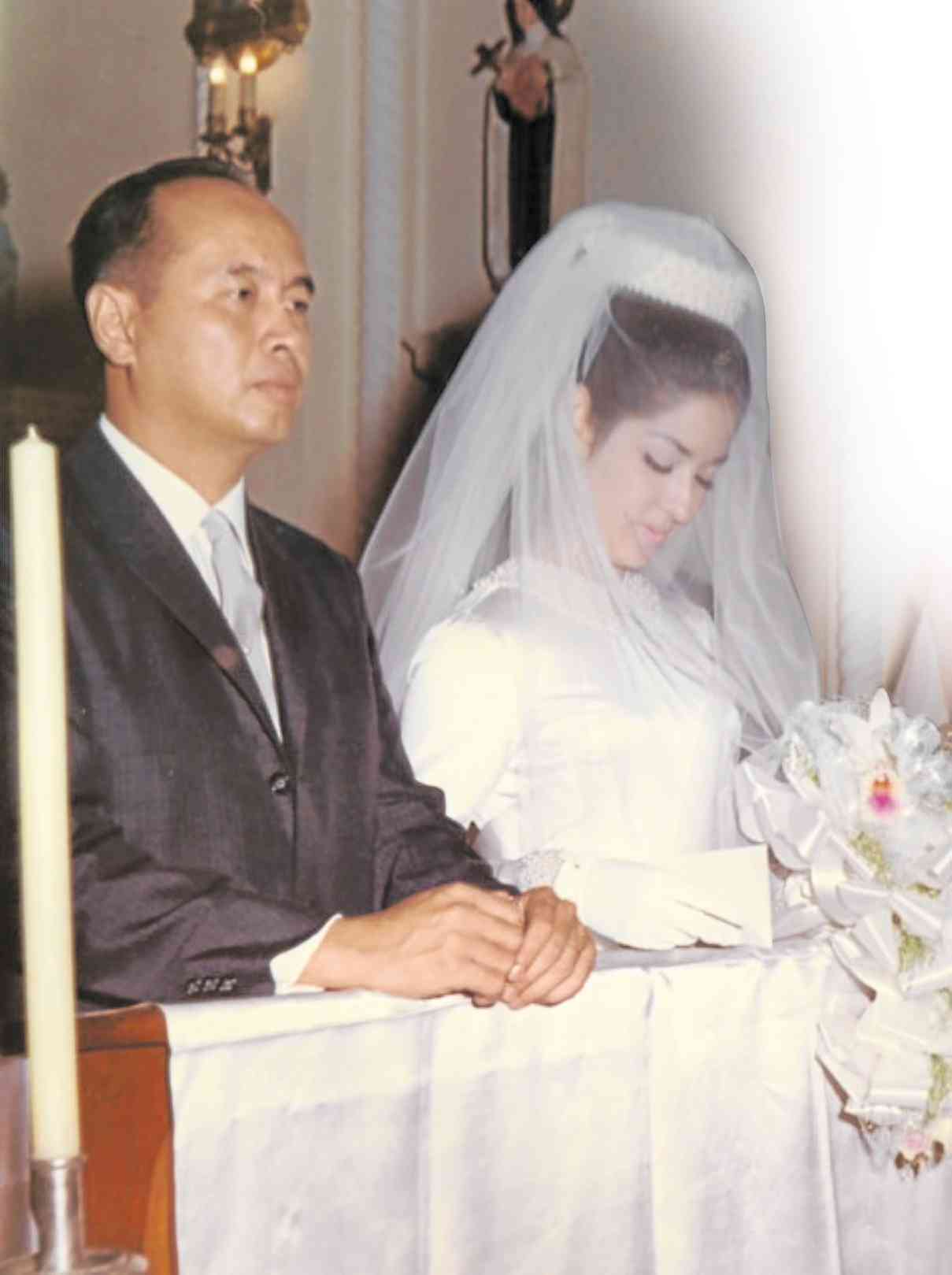 WEDDING of Rafael and Carmelita Salas

The Rafael M. Salas Parks and Nature Center is a pristine ecotourism destination at the base of Mt. Kanlaon in Bago, Negros Occidental. A place where forests touch the silence of the sky, it is a tribute to the majesty of nature, and the nobility of diplomat and statesman Rafael M. Salas.

Protecting this enchanting paradise is the lifework of his gracious widow, Carmelita Rodriguez Salas, after an exceptional life in the United States, and fruitful years as the Philippine ambassador to the Czech Republic.

Carmelita “Menchu” Jakosalem Rodriguez was born in Iloilo and raised in Cebu. Rafael “Paeng” Montinola Salas was born in Bago, Negros Occidental, and grew up in Bacolod. Even as a child, he excelled in leadership and intuitively knew that he had a singular destiny.

“I had never met anyone so focused,” recalls Menchu. “Quite the contrary, I wasn’t motivated or ambitious. I simply flowed with life.”

Menchu and Paeng met in 1966 at the Cebu centennial celebration when they went up the stage to crown the queen of the festival. He held the hairpins as she fastened the crown, blissfully unaware that this then-executive secretary of the Philippines was a very important man.

“Something indefinable brought us together,” she says. “I admired him very much.”

In 1967, they got married. It was a union of mind and spirit, of lively rapport and refreshing idealism.

As executive secretary, Salas witnessed corruption in the highest echelons of government and wanted to distance himself. But before he could make a move, President Ferdinand Marcos entrusted him with the National Rice Sufficiency Program, which he managed with superlative success.

The International Rice Research Institute (IRRI) in Los Baños had developed rice that could be harvested three times a year instead of only once. Salas effectively convinced the farmers to adopt the new technology. Before long, the Philippines stopped importing rice and started exporting it.

In 1969, Paul Hoffman, director of the United Nations Development Program (UNDP), came to the Philippines and was visibly impressed with Salas. The UN was in the middle of initiating an agency to address the problem of population, and he offered Salas the position of executive director. After considerable thought, Salas accepted it.

Marcos was taken by surprise. The papers headlined: “Salas resigns.”

It was a marvelous change. Menchu and Paeng were expecting their first baby. In time, they would raise two sons, Ernest and Raffy, in New York.

As for Salas, his sterling vision encompassed the world. With clarity and conviction, he met with ordinary citizens and heads of state, engaging in an issue so sensitive that few dared to bet on its success.

Yet in 1974, this fledgling organization brought about the first World Population Conference in Bucharest, underscoring the vital link between population and development. By 1985, the budget of the UN Fund for Population Activities (UNFPA) had expanded from its initial $2.5 million to an amazing $142 million, with commitments of $1.4 billion. The speed and vastness of its scope was unparalleled in UN history.

Salas became undersecretary-general of the United Nations and was hailed as “Mr. Population.”

But in 1987, fate cut in. Salas died of a heart attack in Washington, DC, where he had gone to address the US congress. His passing was sudden and startling.

Hundreds of tributes poured in, from fraternity brods to eminent leaders like President Corazon Aquino, President Kurt Waldheim of Austria, and Her Majesty Queen Noor Al-Hussein of Jordan.

When Paeng, 14 years her senior, once expressed his concern about leaving her a widow with two sons, Menchu answered: “I’ll manage. I’ll take care of them… not as well as you perhaps, but I will.”

For their sake, she kept everything familiar—the same apartment, the same schools, the same cadence of life shared with him.

But one night, at bedtime, Paeng reminded her of their merciless pain. “It isn’t the same,” he said.

She told him: “No, it isn’t the same—not for you, for Ernest, for me, for the UNFPA. But it can be good again. And that is what we try for.”

They moved to Orange County, California, where Menchu started an interior design practice. She began to emerge as her own woman.

In 1996, an unexpected turn gave her life a new splendor. President Fidel Ramos appointed her ambassador extraordinary plenipotentiary to the Czech Republic.

During her distinctive tenure, Ambassador Salas was made an honorary citizen of Litomerice, the hometown of professor Ferdinand Blumentritt, whose friendship with Dr. Jose Rizal was the first evidence of a shared commitment to freedom, democracy and human rights that characterizes the Philippine-Czech alliance to this day.

In 2008, Ambassador Salas resigned from the position. She had served under three presidents.

Then, like an eloquent gift, a fresh endeavor came her way—321 hectares of a nature sanctuary that in 1989 the Department of Environment and Natural Resources designated as the Rafael M. Salas Parks and Nature Center.

She committed to protecting it, quite aware that, for any credible success, she needed the support of the private sector. Fortuitously, Washington SyCip offered to help. His invaluable assistance in setting up the Rafael M. Salas Parks and Nature Center Foundation is the bedrock of this organization.

As executive director, Carmelita Salas states: “There is a special resonance in ensuring that this gem of nature, Kanlaon, lives on forever and that for generations to come, the legacy of Rafael M. Salas remains a clear clarion call for a path to follow.”

With verve and imagination, she has been engaged in the conservation of endangered flora and fauna, verdant forests, walks and waterfalls in a lyrical retreat for nature lovers. She has renovated a beautifully rustic facility for conferences, social functions like weddings, and residential rooms with views of ethereal loveliness.

At the heart of the enclave, she envisions a Research Institute for Biodiversity and an Institute for Public Administration with values formation at its core.

In Rafael Salas’ lifetime, he had stressed the importance of ethical values for social order and progress.

A gentle force of elegance and grace, Carmelita Salas has been blessed with a purposeful and precious life.