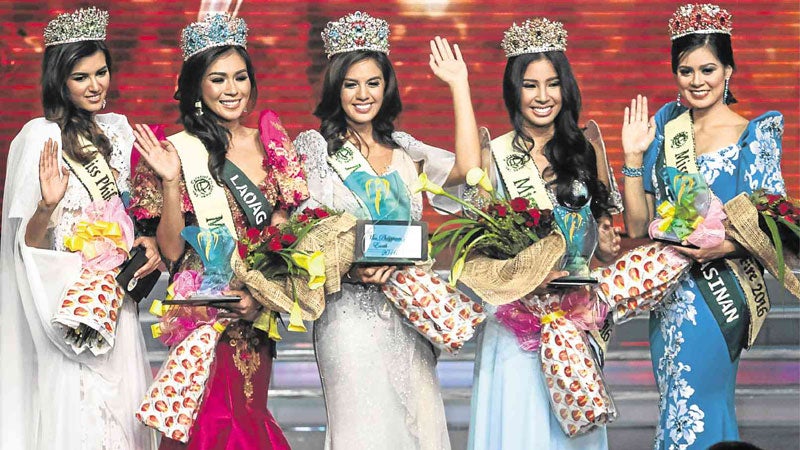 IT WAS a Duterte-inspired 2016 Miss Philippines-Earth coronation ceremony at the UP Theater in Quezon City on Saturday night.

In the final question-and-answer round, the Top 5 candidates were asked: “If you have a chance to talk one-on-one with [President-elect Rodrigo Duterte], what assistance would you ask from him for your climate change advocacy?”

Twenty-one-year-old German-Filipino student Imelda Bautista Schweighart, who emerged the winner, replied: “My climate change advocacy is banning genetically modified organisms (GMOs) and genetically engineered seeds because I believe in natural food in order to feed our mind, body and soul. So if we really want to feed our minds and become smarter, let’s support banning GMOs. I would also encourage [Duterte] to put bike lanes here in Manila, and I will invite him to Puerto Princesa so he can see how clean it is there.”

Schweighart, who is based in Puerto Princesa City in Palawan, won over 45 other aspirants. The beauty pageant veteran joined Binibining Pilipinas in 2013, the same year 2015 Miss Universe Pia Alonzo Wurtzbach first participated in the contest. The Palaweña went home empty-handed.

Schweighart edged out another veteran for the top spot. Kiara Giel Gregorio from the Filipino community in London, England, placed second and received the title “Miss Philippines-Air.”

Melanie Mader from the Filipino community in Vienna, Austria, was crowned Miss Philippines-Ecotourism.

A contestant who made it to the Top 12 made her own mark with a remark that trended online.

Zamboanga City’s Bellatrix Tan picked “#ElNinoLaNina” from the trending topics on social media such as “#ChangeIsComing,” #MediaCensorship,” “#DeathPenalty” and “#Curfew” during the semifinal interview round.

“El Niño is what we are facing right now. If we do simple things like planting trees, then we will not experience drought, right? So if we start now, we will achieve La Niña,” said the communication student from Ateneo de Zamboanga University, punctuating her response with a toothy grin,  indicating her satisfaction with her answer.

Schweighart responded to the topic “#TunayNaDiwaNgKalayaan.”

“Ang tunay na diwa ng kalayaan ay ang pagpapalawak ng isipan (The true spirit of independence is the development of the mind). First of all, we must open our minds and do more research about the world in order to find the solution to what is already happening around us. Yes, there is a problem, but there is a solution as well. Let’s all fight together because we are the people of ‘now’ and we will help each other to save Mother Earth,” she said.

Schweighart will attempt to give the country an unprecedented three consecutive wins in the international pageant scene, after the twin victories of the Philippines’ Jamie Herrell and Angelia Ong as Miss Earth in 2014 and 2015, respectively.

When asked how she plans to make this happen, Schweighart told the Inquirer: “You never tell anyone your plan. That’s the secret to greatness.”

The pageant carried the Independence Day theme, with the festivities associated with the coming inauguration of a new administration.

The Philippines is the best performing country in the Miss Earth pageant, with a total of three wins. Karla Paula Henry was the first Filipino to bag the international title in 2008.