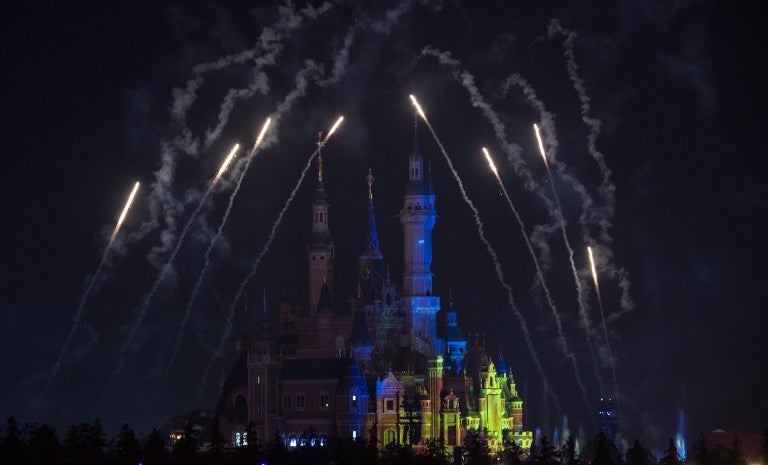 This picture taken on June 1, 2016 shows fireworks being set off near the Enchanted Storybook Castle at the Shanghai Disney Resort in Shanghai. The Disney theme will open its gate on June 16 2016. AFP

SHANGHAI — The Magic Kingdom comes to the Middle Kingdom this week when Disney opens its first theme park in mainland China, betting the growing middle class will spend big on leisure despite a slowing economy.

The $5.5 billion resort, which opens Thursday, features the world’s biggest Disney castle, its blue-topped spires rising above land once occupied by farms and small factories on the outskirts of commercial hub Shanghai.

Disney is seeking to attract crowds with a boat ride based on the “Pirates of the Caribbean,” a show from the mega-hit “Frozen” and a “Star Wars” attraction populated by characters from the science-fiction saga among the draws featuring the company’s beloved movies.

The project broke ground in April 2011, with Disney chairman and chief executive Bob Iger telling reporters it would be a “significant milestone” in the company’s history.

But the opening comes as China’s economic growth has dropped to its weakest level in a quarter of a century, a disappointing end to decades of double-digit growth spurred by government infrastructure spending.

China is banking that consumers — the same kind willing to spend on food, lodging, and souvenirs in Mickey Mouse’s new house — will become a powerful growth engine for the world’s second largest economy.

However, Disney isn’t the only company looking to tap into the rising consumer class, who are increasingly spoiled for choice.

China is building theme parks faster than any other country in the world, with more than 300 projects receiving funding in recent years, according to the National Business Daily newspaper.

Last year alone, 21 parks opened and another 20 were under construction, it said.

Universal Studios is planning a theme park near Beijing, while DreamWorks Animation is cooperating on an entertainment district in Shanghai.

And it isn’t just the foreign giants who are chasing the Chinese fairy tale.

Last month, local tycoon Wang Jianlin, who is building his own string of theme parks and reportedly has close ties to China’s leadership, criticized Disney for a cultural “invasion” just days before opening his “Wanda Culture and Tourism City” in Nanchang to the south of Shanghai.

“This craze for Mickey Mouse and Donald Duck is over. The period when we would blindly follow where Disney led has been gone for years,” said Wang, founder of the Wanda company which bought Hollywood studio Legendary Entertainment for $3.5 billion in January.

Despite tough talk from competitors, Disney’s position as the guardian of generations of children’s dreams made it an attractive prospect for Shanghai, whose leaders are hoping a little bit of fairy dust will rub off on the city’s tourism industry.

The plan to build the park was floated as early as 1999, but was shelved to allow Hong Kong — a special administrative region of China — to get its Disney park up and running in 2005.

Hong Kong Disneyland struggled for years to turn a profit after opening, and reportedly plunged back into the red last year due to a fall in mainland Chinese visitors.

Shanghai has pulled out all the stops for Disney — whose Chinese partner for the project is state-backed Shanghai Shendi Group — by building new infrastructure and cracking down on violations of the company’s intellectual property.

Early indications are good. At least a million people had already visited the resort area — which includes a shopping and entertainment zone accessible without tickets — before opening day, a local official said.

Disney calculates there are 330 million people living within a three-hour journey of Shanghai — many, it reckons, are potential visitors prepared to pay either the peak period entrance fee of 499 yuan ($76), or the 370 yuan ($56) at other times.

But, say observers, in a country where the average disposable income is just $278 a month, that might prove a little bit rich for some.

“Some people with average incomes may find Disney too expensive,” Professor He Jianmin of the Shanghai University of Finance and Economics told AFP, adding that Disney needs to attract people with higher earnings living in the country’s booming eastern region.

“The Shanghai park has the potential to become one of the world’s most profitable Disney parks,” he said.