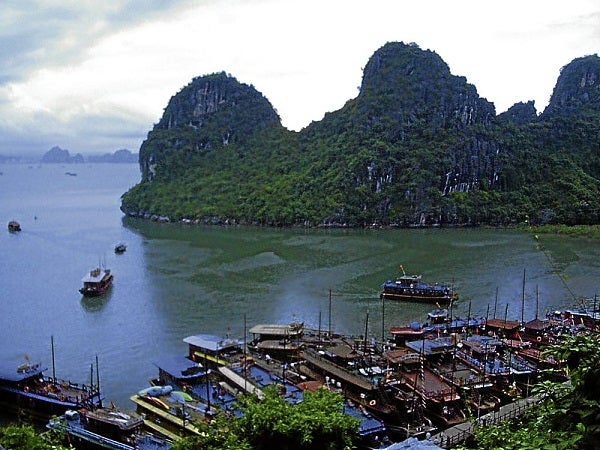 Halong Bay: One feels lost in a painting 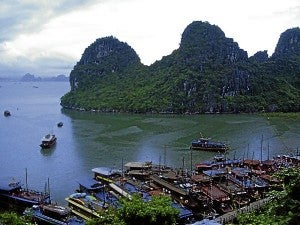 There is a scene from a famous film where a couple evades the turmoil of their country by taking a boat trip through a fascinating archipelago. For countless hours, the lovers lie ensconced in their vessel as it glides past a fairyland of forest-covered peaks rising from the sea.

The fantastic setting of this unforgettable episode is actually Halong Bay in the northern Vietnamese province of Quang Ninh, an easy two- to three-hour ride from Hanoi.

We arranged our cruise through our hotel in the capital. Since we had the good fortune of staying in an InterContinental, I expected that every detail of this marine experience would be organized.

It turned out that no one had looked into the matter of rest stops. The establishment where our driver chose to break our journey was not the most pleasant. It had a wooden shed in the backyard which served as the toilet! One would think that surely the folks at InterContinental in Hanoi would be more meticulous about the itineraries of the tour packages they offered their guests.

The pier where we would board our boat was not much better. It was crowded, hot, and chaotic. I had no choice but to shrug this off—what else would a busy tropical port be like?

Entering our boat, I caught a glimpse of a faint line of irregular shapes, lingering on the faraway horizon. These were the fabled isles I had seen in the film. 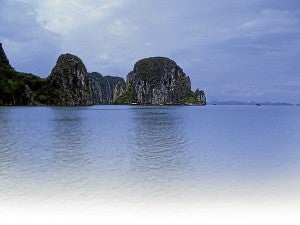 As we drew closer, I began to see what had attracted so many others before me. The scenery was truly bewitching.

I don’t know exactly what it is about a view of countless hills in all shapes and sizes which is so captivating. Perhaps it is because the hills stand at different distances so that some are rendered darker or clearer while others are only blurred silhouettes. Chinese artworks come to mind with their varying areas of bold brush strokes and soft washes.

Is part of the appeal the sense that one is lost in painting?

In the case of Halong, the experience is heightened by the fact that the hills are islands surrounded by a wide, dark sea. Every curve of peak is doubled, mirrored in a magical realm which appears or disappears according to the whims of the light.

The whole area—about 400 sq km—has been inscribed on the Unesco World Heritage List. The inscription makes special note of the rich biodiversity with about a 1,000 species of fish as well as a range of mammals, reptiles and birds.

The islands make up what is referred to as a karst landscape. In this category falls the terrain of places like Guilin in Southern  China or even our very own Chocolate Hills in Bohol. To be precise, Halong is more correctly described as a drowned karst landscape because of its marine setting. In this way it may be compared with Phang Nga in Thailand or El Nido in Palawan.

There are about 1,600 islands in the Bay most of which are uninhabitable because of the steepness of their slopes. We glided past these emerald mounds anchored in celadon waters for what seemed like hours.

Some of the mounds look like immense stallions grazing in a field of grass. Others look like castles with half-ruined turrets overgrown by vines. Still others remind me of the view from Camp Lookout in the hills behind Dumaguete. There a friend had observed that the clouds were pretending to be islands.

In Halong, time takes a nap on a chair on the deck. No one really talks. The mind is stilled.

As it turned out, the captain has stopped the engines. He suggested a swim. Only my niece, Mia, took up his invitation. She dove into the sea— now a plain of viridian glass. I had not quite noticed, so enveloped was I by the quiet, that the sea had become completely flat. There were no waves. The islands had formed a wall that kept the winds and the rest of the world away. We were in a pond.

Now that I look back, I wish that I had just jumped in myself. It would have been bliss. Where else could we come upon a pool in the middle of the ocean? 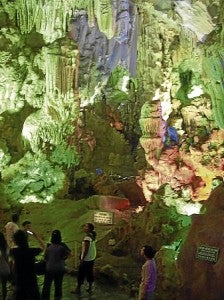 Our boat was a modest affair. There were no cabins, just a large hall that functioned as dining room.

The meal was not fancy. There was fried fish, green sprouts quickly sautéed in garlic, something that was certainly a lumpia, boiled shrimps. We wiped our plates clean.  The freshness and the proximity of the sea made everything so sweet.

A friend, a travel expert, tells me that one can book more elaborate vessels. I have seen pictures of boats with bedrooms that have canopies, carpets, and mood lighting. Some voyages offer well-trained chefs and butlers. I suppose this can be charming too. Yet how much more pampering does one need when there is this view? I imagine that the scenery will reveal itself just as languorously if one is sitting in plush quarters as when one is in a more spartan chamber.

At one point, we stopped to visit a floating fish stall. We alighted onto a large wooden platform adrift on the Bay. There were several pens which were really just square openings that revealed nets set in the warm waters. The pens were brimming with sea-life, squirming and splashing about.

It seemed a pity to think that someone could actually point to any of these denizens of the deep and the poor creature would be caught, thrown into a pot and then readied for a fine meal. For a few moments I toyed with the idea of paying the fishermen to let their wards all go. Surely such an act would earn me a place in heaven.

Later on we docked to see a cave. We had to climb a steep path that led up the slopes to enter into the darkness. Except that it wasn’t so dark. Colored lights had been installed. 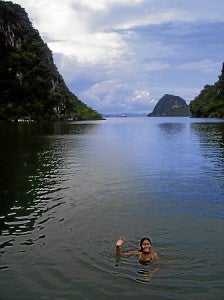 The caverns now looked like a Las Vegas set. Stalagmites became Christmas trees and stalactites became chandeliers. Perhaps entertainers dressed as mermaids and mermen would appear at any minute.

We hurried back to our boat only to be greeted by a dolphin in the middle of the mountain path. Its steel mouth stood ready to receive whatever refuse we were willing to part with.

As we pulled out of the harbor I spied a huge sign—it was the emblem of the Unesco World Heritage List. It saddened me when I thought about how it would have been better if Halong Bay’s inscription on this prestigious list were celebrated not with such a prominent marker but with the pristine quality of the environment. When one is presented with so much natural beauty, why is there a compulsion to add another metal dolphin, another cement bench in the shape of a log?

I suppose one should still be thankful. After all, the islands were not covered with billboards. The dolphin cans kept the trails free from trash and the caverns had their own bizarre charm. What’s a little neon light when one can take refuge in such sublime scenery afterwards.

On our return trip, our crew brought out some souvenirs to sell. I was actually interested in the way that our whole journey had been choreographed. Clearly, someone had studied the schedule carefully and worked out what should make up the standard trip. There was the moist towel offered when you entered the boat, then the initial cruise, stops at the fish stall and the cave, and the pause for a dip followed by a simple but delicious lunch.

At the end came the time for souvenirs.

I saw fans and pearls, lace doilies and T-shirts. The products were well-fashioned. I noted a wide selection of artworks. A number portrayed the Bay. I thought to myself: Should I complete the circle and return from my cruise in the heart of a painting with an actual painting in hand?

I looked at the seascapes which were sailing by. I smiled at the seller and then put away my wallet.  I decided that I would just have to make do with the Halong Bay unfolding in my memory.