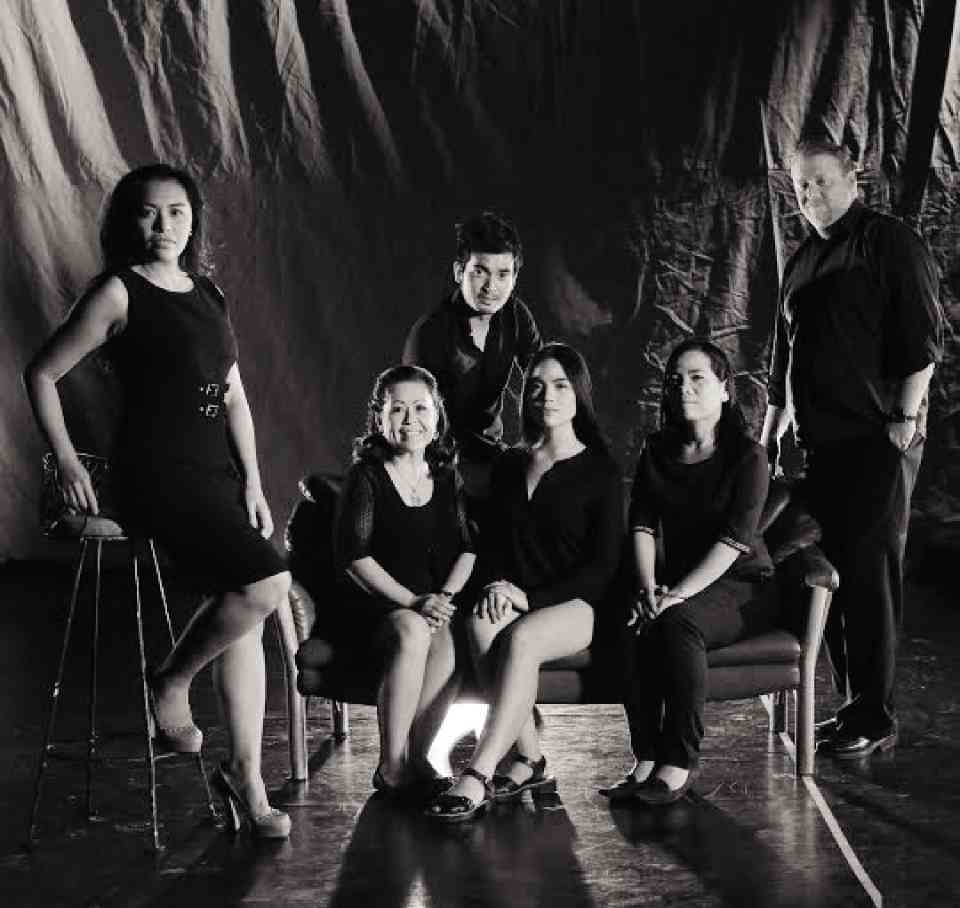 DIRECTOR Banaue Miclat-Janssen (left) with the cast of UP Playwrights Theater’s “The Female Heart:” PeeweeO’Hara, Al Gatmaitan, Chase Salazar, Sheryll Ceasico and Mark McKeownas. Linda Faigao- Hall’s drama about a woman from Smokey Mountain who becomes a mail-order bride in the United States is the first Filipino-American play to be presented by UPT. It runs July 1-10 at the Wilfrido Ma. Guerrero Theater, University of the Philippines Diliman. PHOTO COURTESTY OF UP PLAYWRIGHTS THEATER

I MET Linda Faigao-Hall in 2005 in New York. Our common friend, Andrew Eisenman, told me Linda was doing a private reading of her play, ‘God, Sex, and Blue Water’ and Andrew recommended me for the lead,” Banaue Miclat-Janssen says of the Filipina-American playwright who also wrote “The Female Heart,” a play she is now directing for UP Playwrights Theater (UPT). It is set to open July 1 at Wilfrido Ma. Guerrero Theater in University of the Philippines Diliman.

For her part, Hall says, “In 2008, a play of mine called   ‘Sparrow’ was produced by Living Image Arts at the Theater Row, an off-Broadway venue. Banaue auditioned, and I was immediately impressed. I was also delighted that she was a Filipina actor. I was looking for someone who had that Filipino sensibility. She fitted the bill to perfection.”

That was two years after Miclat-Janssen had finished her Master of Fine Arts in Acting at Brooklyn College, City University of New York.

Now an assistant professor at the Department of Speech Communication and Theatre Arts, College of Arts and Letters in UP Diliman, Miclat-Janssen was asked by UP Professor Emeritus Tony Mabesa to direct two one-act plays for UPT, which had been on hiatus for three years.

Miclat-Janssen thought of  Hall’s “Sparrow,” the play she had acted in about a Filipina immigrant in the United States who, after an absence of 10 years, comes home to plead for her brother’s release from a rebel “sparrow” unit whose leader is her childhood friend.

When the other one-act play she wanted could not be made available, Miclat-Janssen decided to choose another play from Hall’s 18 plays produced either on Equity or off-Broadway venues. She chose “The Female Heart,” about a woman from the Smokey Mountain slums who becomes a mail-order bride.

This is the first time UPT will feature a Filipino-American play. The production is also meant as a tribute to Teatro Hermogenes Ylagan (THY), UPT’s old home which recently burned down together with the UP Faculty Center (Bulwagang Rizal). The play will instead be staged at Guerrero Theater in Palma Hall.

Miclat-Janssen says, “I decided to retain the original traverse staging at THY, as tribute to it.” Unlike other productions at Guerrero Theater, “The Female Heart” will feature a theater-in-the-round staging.

First staged at the Asian American Theater Festival in New York in 2007, “The Female Heart” is meant to explore specific circumstances that drive a Filipino woman “to rise above her situation and, to use William Faulkner’s word, ‘prevail,’” says Hall. “The unequal status between men and women is a universal problem, both in developing and developed countries.”

Miclat-Janssen had to make adjustments with the original dialogue, using English in scenes set in America and translating to Filipino other scenes. “The play in two languages is done in a way that captures the sensibilities of both cultures,” she says.

Hall, a recipient of the National Endowment of the Arts Award in the United States, comes to the Philippines every year to conduct the Cornelio Faigao Memorial Writer’s Workshop in Drama and Performance in Cebu. She says: “Reading the Tagalog translation in the scenes set in the Philippines was a radical experience for me. I discovered the power of the Tagalog sound. I’m a Cebuana, so I had some language fluency problems. I didn’t understand some of the words, but when I did, I found Tagalog to possess different connotations and nuances from English. In some cases, the Tagalog words would overpower the subtext I intended in English. It was a profound learning experience.”

She adds: “There were also some historical footnoting Banaue’s team did. I humbly stand corrected for some of them. There are a lot of American products I used in the play in the scenes set in the Philippines to underscore its American consumerist character, and some of these products were not introduced in the Philippines until much later—Alpo dog food, for example. They did a very thorough job.”

“I read and read the script and about the issues it tackles,” says Miclat-Janssen. “I went with the actors to the old Smokey Mountain in Tondo and a gay bar featured in the play. The actors speak their mind while we are doing the blocking, or a scene work or choreography.”

For “The Female Heart,” the cast she assembled includes Chase Salazar as Adelfa, Al Gatmaitan as Anghel, Peewee O’Hara as Rosario, Sheryll Ceasico alternating as Rosario, Mark McKeownas as Roger, and Ina Azarcon-Bolivar as young Adelfa.

The contributor is author of the deluxe book “Soul Searchers and Dreamers: Artists’ Profiles,” (published by the Maningning Miclat Art Foundation Inc. and Erehwon Center for the Arts), available at Solidaridad Bookshop, Mt. Cloud Bookshop and Liongoren Gallery. E-mail