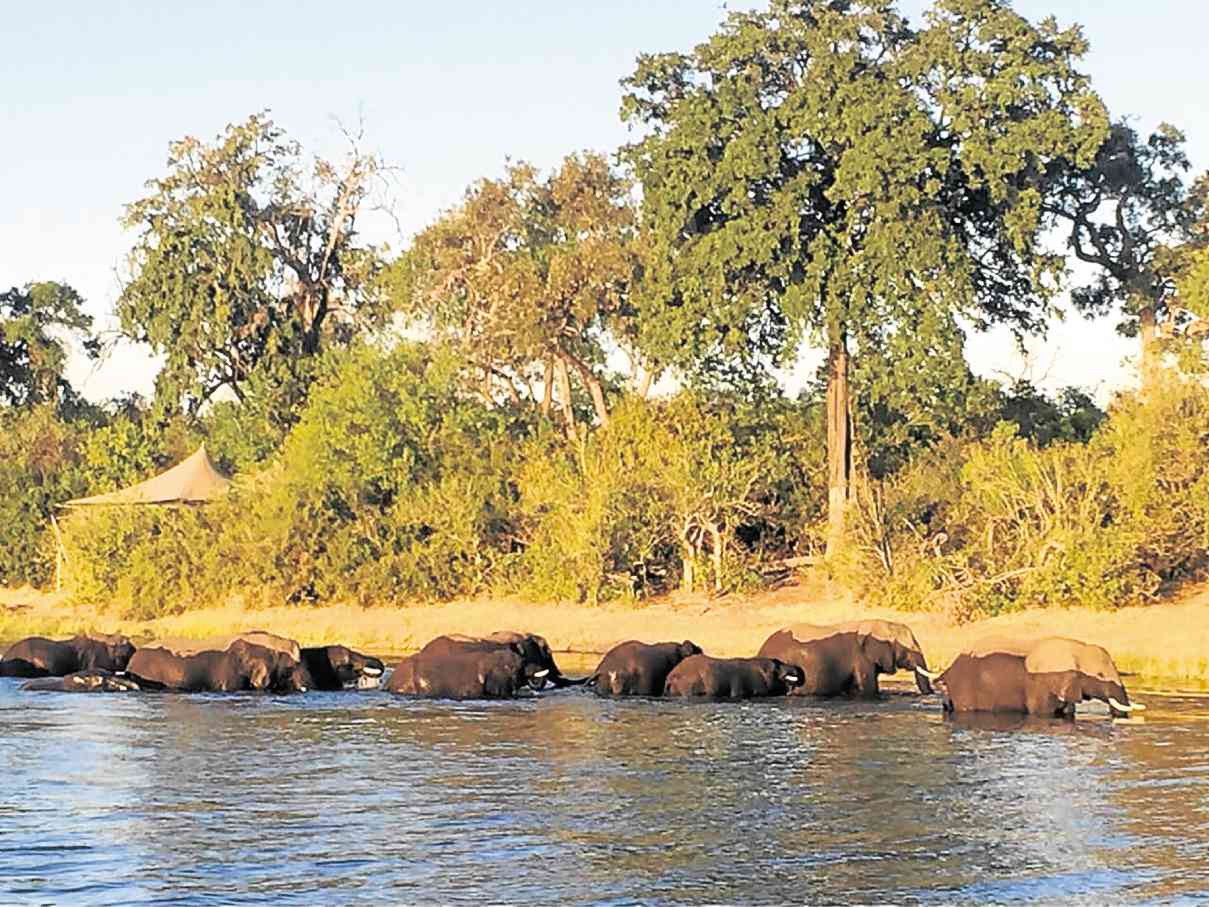 That sundown one day two weeks ago was one “rush hour” we cannot forget.

One after the other, the herd of elephants emerged from the bush, strode down the river, plodded ever so slowly in it, with the baby elephant in the middle of the parade being nudged on by the trunk of its mother, until it reached the other side of the river.

One by one, the elephants heaved their ton-heavy bodies out the water and onto land, the sight of each laborious but graceful effort beating the spectacle of models on the fashion runway. Forgive the comparison.

Welcome to the afternoon rush in the Linyanti river in Botswana, when the elephants move from shore to shore in their forage for food. To urban-traffic  survivors like us, this is Edsa in chill time.

And like in a fashion show, we got the front-row seat—on a covered boat complete with  cushioned sofas and cocktails, our feet safely tucked away from the crocodiles lurking in the river.

We didn’t see hippos rear their heads in the water at this cocktail hour. But the parade of elephants was enough to feed our Instagram and Facebook posts.

This is the Africa we only read about or saw in the movies, but which friends who are incorrigible and seasoned  travelers  decided to turn into incredible face time, a reality.

It is a modern Africa, where the wildlife’s habitat is respected, conserved and protected so that the animals like lions and elephants are used already to coexisting with safari vehicles and the curious humans, where the camps have near-five-star hotel amenities but use ecology-friendly construction technology so that they can be dismantled any time and thus, minimize carbon footprint.

In the entire time we roamed the bush savannah, we didn’t see litter or trash at all.

The African safari could be proof of how sustainable tourism could be viable. These camps use renewable energy technologies to assure the lowest possible carbon footprint, for the conservation and protection of  wildlife habitat.

According to the publication of Wilderness Safaris (www.wilderness-safaris.com), which has the concessions for some of the vast wild life habitats and wilderness areas across the African continent, these destinations undergo biannual audit to ensure their compliance with its conservation mandate.

Imagine sleeping or waking up to the motley sounds of wild animals—such as lions—while still enjoying creature comforts akin to those in a hotel.

Our trip had three legs: Victoria Falls in Zambia, the safari camp in Botswana and the jaunt to Cape Town.

From Zambia, we took a (very) light plane to cross the border to Botswana, and from the Botswana airport, another (still very) light plane flew us to the airstrip accessible to DumaTau Camp right in the bush savannah of Botswana.

This was my second time in Botswana, the first being in the late ’90s for De Beers, Botswana being a mining country.

I knew Botswana to be the face of a progressive, modern Africa, with a convenient international airport and with Audis, BMWs running the main roads of its capital.

In the ’90s, our game drive to the wilderness was in a fully-covered jeep with steel bars as protection. You felt a shield even as the elephants, giraffes or a lion or two were just a stone’s throw away.

excitingly different. The animals were within touching distance, with “lion king” walking past you almost a close breath away. Gulp!

About 50 years ago, Africa was an unregulated hunting ground. The human predators pushed the wildlife  deep into the jungle, hardly accessible to humans.

Since the protection and the conservation of their vast habitats began—across bush savannahs, rain forest, the desert, the ocean—they have come to coexist with their human visitors. But the latter must abide by the rules of the jungle, which we were briefed on in the camp.

At the airstrip we were collected by 4×4 safari jeeps—open on all sides, the top hood  being optional.

No covers? None, said our articulate guide, Mocks, who’d turn out to be one of the gutsiest and adept drivers we’ve come across. He  discouraged us from having the roof installed on this lovely winter day, with the sun beating down on us. (How do you tell a Bostwanan that sun and Belo simply don’t go together?) I chose to ride on the roofless jeep.

No time was wasted. Having settled at DumaTau Camp,  after lunch, we rode out to the bush.

Mocks stopped our 4×4 after we pointed out this big white boulder on the roadside—a sculpture-like skeleton. Mocks poked it with a twig, turned it upside down to show us the skull of an elephant that must have been there for three years now, he said. The other animals have picked on its flesh, he added, pointing out where the tusk and molars used to be.

Welcome to the bush savannah. But first, there are rules that must be observed, Mocks said:

Don’t stand up on the jeep or let your body jut out, especially when the animals are up close. It’s very important that the animal doesn’t distinguish you as separate from the vehicle; animals see the vehicle as one integrated whole. This must be the reason also that we were advised to wear earth or safari colors—to blend with the bush.

Don’t get out of the jeep or walk out on your own.

When Mocks tells us to quiet down, we must pipe down, no loud voices.

Hardly was Mocks done reminding us about these rules than we came face to face—yes, short of inhaling his breath—with an elephant. He spotted us right away, let out a loud sound and produced a cloud of dust with his legs. He was poised to charge our vehicle. His trunk was pointing at us; he could smell us.

This was Dumbo’s dad greeting us in the bush, a male elephant  on solitary trip.

Just then Mocks was alerted on the radio that a “happening” was going on nearby—lions were feasting on a zebra.

After meeting up with another group and moving to its jeep, we drove to where the pride of lions was having its lunch. (Only three vehicles, at most, were allowed around these packs of animals.)

If we were afraid facing Mr. Dumbo, this time, we were very afraid. As our jeep took its place beside another one, a spitting distance away from the huddle of lions, there was absolute silence except for  the muted snapping of smartphone cameras.

There they were—the lions who lunch. Lying on their stomachs, hunched over their meal, they formed a beautiful brown mound. That imagery was sheer irony—because you could see their “teeth” ripping off the flesh of the zebra whose striped skin could now be barely distinguished.

The lions who lunched hardly paid us notice. A few, especially the cubs, were splattered with blood. One or two would move away from the huddle, and just rest on the sideline, apparently feeling already full. Mocks said it could take a day or two  before the lions ate again.

‘McDonalds of the jungle’

That was our first day in the bush—a very graphic spectacle of life in the jungle. As we drove around and spotted the elephants, giraffes, zebras, impalas, baboons, every kind of wild bird imaginable—the inhabitants of the wild—we realized what the food chain was really like. It wasn’t as cute as Disney at all.

“The impalas are the McDonalds of the jungle,” Mocks said, “because everybody feasts on them.”

He pointed at one such bottom-dweller in the food chain: “That impala survived the night.” It didn’t land on the lion’s dinner table.

We got so many small tales of the jungle from Mocks:

The giraffes seemed like the gentlest, apart from the impalas. They merely stared at us, their curious look so endearing. But their kick could be mean enough to knock out a lion. “One kick in the eye, and rest in peace,” said Mocks.

But they are so subdued that when the lion feasts on it, it doesn’t even let out a scream; a tear just falls from its eye.

Not only do vultures feed on carcasses, they also seem to love anything dead; they perch on dead trees.

Buffaloes lose their covering hair as they grow old, so that they wallow in the mud to protect themselves from the sun.

Indeed, the jungle is about the survival of the fittest, a true inspiration for our concrete jungle.

At night we weren’t allowed to walk alone from the camp’s main pavilion, where the living room, dining room and the view deck were, to our tented villas. The staff was pretty strict about this, even if our tent was only a short walk away.

This was because the animals really roamed freely.

We slept and woke up to an orchestra of living sounds: that of the hippo echoed like a loud fart (“Is that on our deck?” I’d ask always. “No, that’s right in the water,” my son would reply), those of the hyena, the owls, the birds, even the muted sounds of the elephants.

Just back from a game ride one noon, my son rushed to the faraway swimming pool because he knew the herd of elephants would be crossing our camp, past the pool, onto the shore and to the river. The Camp’s tented villas were built on the shore.

We must have been in luck to see some jungle action. The next day, our jeep came across a big tribe of cape buffaloes, their bulk formation a beautiful study in black against the browns and greens of the bushes.

We thought it was a beautiful scenery until Mocks told us that they were really in “battle mode,” with the males standing in  guard at the   phalanx, their horns clearly poised to strike and the young safely ensconced in the middle.

At that moment we saw one after another, the female lions walking toward the direction of the buffaloes, each one taking her place, as if resting on the spot, sitting in wait—patiently.

Mocks told us how these lions stalked their prey with utmost patience. Nobody was in a hurry to leave or to budge, obviously—except us who sat frightened in our jeep. Wouldn’t you be, if the lions walk past your vehicle, within arm’s (eating) length?

Then finally, Mr. Lion King himself appeared, a spring on his steps, his mane ruffled in the wind, clearly marking his territory, indeed his kingdom. It is said that the female lions do the hunting, while the male roars and struts around.

That mid-morning, we did as the lions did—we waited. It was comforting enough that the lions would just stare at us and let us be. (That was how, the following week, we arrived back in Manila in one piece.)

Suddenly, a cloud of dust rose from afar. Then the buzz went around from one vehicle to another—the buffaloes got away. The herd had bounded away from their stalkers.

And then we saw the lions, one after the other, leaving their posts and walking away.

That was one day the lions didn’t do lunch.