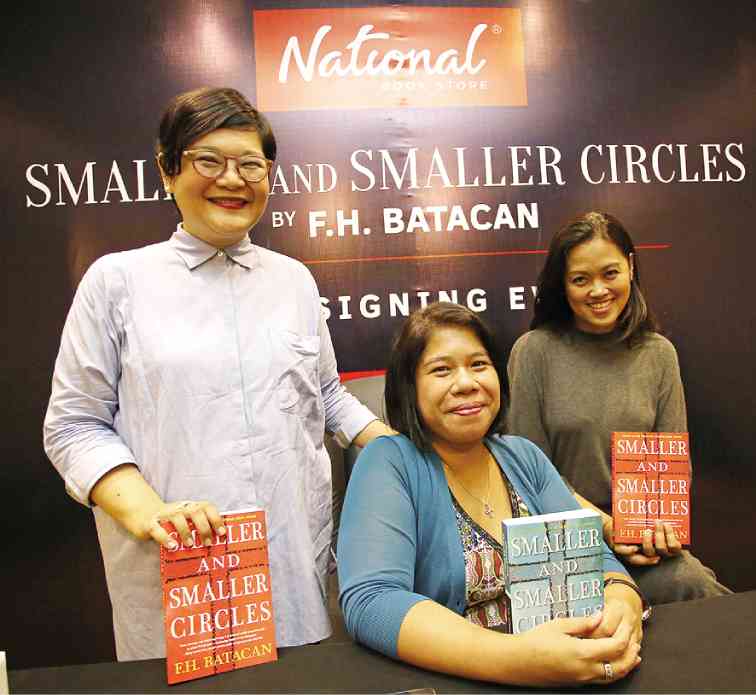 IT ALL began as an innocuous file on Maria Felisa H. “F.H.” Batacan’s computer. It was a story she was writing, something different and dark, away from her job at an intelligence agency.

She finished it, entered it in the Carlos Palanca Memorial Awards for Literature—“I entered on a lark. Wala lang. Suntok sa buwan,” she says—and “Smaller and Smaller Circles” promptly won the Grand Prize for the Novel in English in 1999.

The University of the Philippines Press would publish it in 2002.

“Smaller” really was different. Set in 1997, it was about a mysterious serial killer preying on children at the Payatas dumpsite—and the two Jesuit priests who used science and skill to try and stop him. “Smaller” was the first Western-style Filipino crime novel, meaning, it used the familiar procedural elements but set it firmly in a Philippine setting.

Clocking in at a relatively slender 155 pages, it was a small shard of quicksilver reading that would go on to win the National Book Award and the Madrigal-Gonzalez Best First Book Award. “Smaller” would go on to become both a cult favorite as well as required reading in classrooms. It all came as a surprise to Batacan.

“It’s had a life of its own quite independent from me,” she admits.

But Batacan, who is now based in Singapore, wasn’t quite done with “Smaller.” With her literary agent Andrea Pasion-Flores’ help, Batacan sold the rights to New York-based publisher Soho Press. Batacan hunkered down and spent three years writing an expanded version of the book.

In 2015, Soho published the new edition of “Smaller,” now a robust 353 pages in hardcover internationally and in paperback in the Philippines (the red cover) to critical acclaim.

Now the big, little book is making its way to the big screen. Produced by Tuko Film Productions and Buchi Boy Entertainment, “Smaller” is directed by Raya Martin and currently being shot. It will jump out onto Philippine cinemas later this year.

Ria Limjap, who served as associate producer on the acclaimed 2015 film “Heneral Luna,” is producer and writer on “Smaller.” She had heard of this crime novel with Jesuits as detectives.

“I thought that was interesting,” she says.

Filmmaker Moira Lang (formerly known as Raymond Lee) knew Batacan and mentioned the book to Limjap. Limjap then picked up a copy of the book at the 2015 Philippine Literary Festival where “Heneral Luna” had a screening.

“I couldn’t put it down. I finished it the next day,” Limjap recalls. “It’s a great story. I loved crime fiction. It was so fun to read and very cinematic the way the novel was written.”

Limjap then spoke to her friend Martin, asking, “Wouldn’t this be amazing as a film?”

Martin, who had read the book as a student, said it would.

Limjap then met with Soho Press last fall and acquired the rights this summer.

“I’m just overwhelmed,” Batacan says of the idea of “Smaller” becoming a film.

“I’m really lucky. I’m even luckier to have this particular team behind it,” she continues. “It’s surreal. I never had any great ambitions for the book so this was something that was totally unexpected. I’m really excited to see what’s going to happen.”

The script was developed and written by Lang, Limjap and Martin, with Batacan as consultant. They began shooting in May. The cast was handpicked, with veteran actor Nonie Buencamino as Fr. Augusto Saenz, the Jesuit forensic anthropologist; Sid Lucero as his right-hand man, Fr. Jerome Lucero; and Carla Humphries as reporter Joanna Bonifacio.

Batacan, who was in Manila for the signing event for the release of “Smaller’s” international paperback edition (the blue cover), happily talked about the upcoming film: “For many people, it will be to see these people come to life. The actors may not necessarily fit the physical description but they very much capture the essence of the characters, and that’s usually the thing people look forward to. I also think people want to be taken to familiar places, and the sinister and dark in those places.”

Fans of the book will be happy to know that Batacan is now at work on a prequel, tentatively titled “The Weight of Sin,” also due from Soho Press. Batacan read excerpts recently to an appreciative audience.

“I think it’s very timely. At the center of it is political corruption and impunity,” she says. “It involves many of the same characters, although some of the characters who are front and center in ‘Smaller’ take a step back and other characters take the lead. It’s set three years before. Even though it’s set in 1994, I think we see it confront many of the same problems we have in 2016.”

Meantime, the filmmakers are laboring to finish production and anticipating the challenges of marketing a film with this unique pedigree.

“The biggest challenge will be to get the audience to come out to see a film about a serial killer with priests as detectives,” Limjap says. “We have Buencamino in the lead and Lucero with him, and while they are recognizable, skilled and wonderful as actors, they’re not what you would call a box-office draw. But as we saw with ‘Heneral Luna,’ if you have a story that’s compelling enough, relevant and marketed really specifically to a certain target market whom you know will come out to see the film, then the thinking audience will emerge and support the film when we need the support, which is specifically the first day and the first week.

“We’re trying to finish the film as soon as we can. We feel it’s such a good story and it really reflects what’s going on in the country not just in the ’90s but until today. We’re hoping that the expectations are met, and people have a curiosity and a hunger for a film that’s good and they’re not just making do with another lame rom-com. Not all rom-coms are lame—some of them are— but it’s always the same thing. We want to give them something that’s fresh and something that’s really smart.”