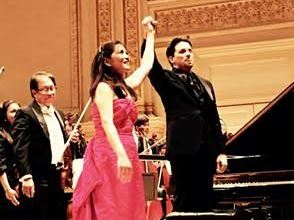 A good mixture of American and Filipino audiences at the 2,804-seater Isaac Stern Auditorium of Carnegie Hall gave the Philippine Philharmonic Orchestra (PPO) a rousing standing ovation Saturday night (June 18) in a historic debut at a highly revered venue.

The concert sold out two days before the engagement.

Indeed, the Filipino audience outdid themselves at Carnegie Hall by giving an ovation to every number of the 80-member PPO, under conductor Oliver Ochanine,   starting with the Shostakovich Festive Overture down to the Sibelius violin concerto with soloist Diomedes Saraza Jr.

The violinist told the Inquirer: “The acoustics at Carnegie Hall were superb. Maestro Rony Rogoff and I were chatting after my dress rehearsal and it was impressive how the sound carries through the huge hall. On stage it feels like I’m just practicing in my room. It’s dry in a good way. I can hear the details of the pieces from the orchestra instruments. I felt the whole audience reaction was subliminall. I felt lightheaded after because I couldn’t believe I just had my Carnegie debut and the applause was awesome. The standing ovation was just a bonus.”

Cecile Licad, performing as soloist on Rachmaninoff’s “Piano Concerto No. 2 in C Minor,” got the most thunderous applause and a total of three standing ovations and had to oblige with an encore.

Said Licad in her Facebook post: “Indeed, it was a magnificent hall and I had a great piano and a really wonderful audience. This is a great moment with the Philippine Philharmonic who I think played their hearts out.”

Conductor Olivier Ochanine told the Inquirer: “The audience was incredible. That feeds the orchestra so much. The orchestra was really inspired. I don’t really have the words to describe it but it was an amazing feeling to see such a huge crowd being so supportive of Filipino orchestra musicians. I have goosebumps right now as I think of it.”

Ochanine said that like violinist Saraza, the Carnegie concert was also a debut for him and he is proud it was with the PPO. “I just want to say that—when you believe in something and refuse to think that it cannot happen, it will happen. Miracles happen if the reality exists in your head and in your daily belief. I never once thought that this was impossible. I did have challenges. But in the end, this was meant to be. And we all made Filipino history tonight. It is an incredible feeling of love for what they accomplished tonight”

In the audience were his daughter Sophia Romero and two children. “It is very fitting that on the eve of Father’s Day, my late father Maestro Redentor Romero was honored at Carnegie Hall when his original composition ‘Philippine Portraits.’ I remember the many nights my father wrote this work in the music room of our Merville home, his hands waving and weaving notes in the air that only he could hear. In many ways, ‘Philippine Portraits’ reflects his love of country and his passion for music. As I remember it, the music is brash, it is colorful, it is joyous, it is so full of life. It is so Dad.”

The Carnegie Hall performance reverberated on Facebook with netizens cheering the Filipino orchestra and its two brilliant soloists.

Licad fan Lara Halili who drove all the way to New York to watch her idol said the Carnegie concert was a great moment for Filipino artists and orchestra. “It’s time we realize Filipino artists deserved so much more from its audience and the government. I was star struck by Saraza. He made the violin sing to its full glory.”

Licad’s recent triumph at Carnegie Hall is a testament to her affinity with Rachmaninoff’s “Piano Concerto No. 2 in C Minor.” It was with that same concerto that she jolted Manila critics and went on to impress her first audiences in Philadelphia.