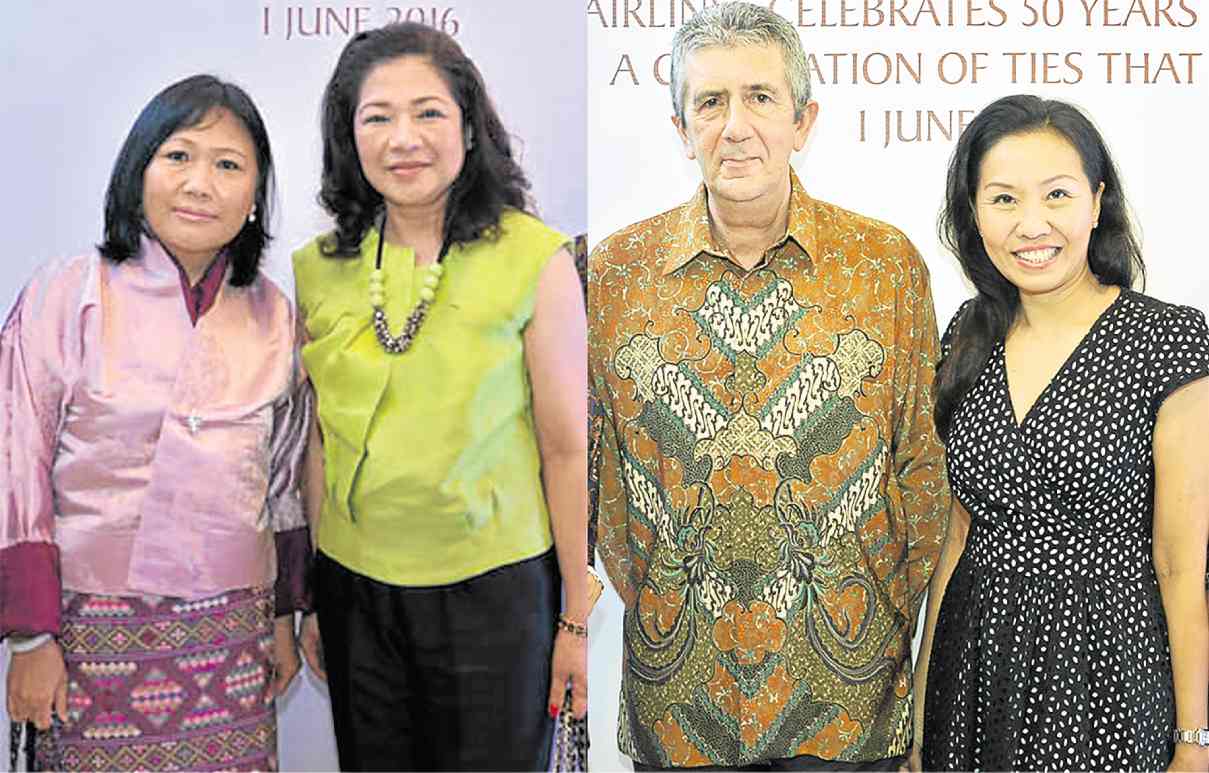 Singapore Airlines (SIA) marked 50 golden years in the Philippines, palangga, with special treats for frequent flyers aside from refurbishing its already ultra-modern fleet.

The très exclusive anniversary dubbed “A Celebration of Ties that Bind” was held at the well-manicured garden and eye-catching residence of Singaporean Ambassador Kok Li Peng in Makati. It was attended by members of the diplomatic corps, travel industry players, and SIA clients and friends.

Following the SIA ethos of “always providing excellent service with a keen attention to detail,” nothing was spared to make the celebration truly memorable.

The home of the ambassador was elegantly styled with arrangements by “floral architect” Rachy Cuna, no less.

The airline’s iconic Singapore Girls were present, mingling with the guests and teaching them how to make a rose using SIA’s signature batik fabric.

By the huge patio we indulged in gourmet delights courtesy of chef Gilbert Pangilinan who whipped up local interpretations of popular Singaporean dishes such as satay, popiah and oyster omelet, and also prepared favorite Filipino dishes such as chicken adobo rice, lumpiang sariwa, wagyu inasal and suckling pig.

I had two servings of Hainanese chicken, my all-time favorite dish.

The feast was prepared in collaboration with the LTB Association of Chefs that recently won several awards at the 2016 Culinary Challenge in Singapore.

Later on we were also entertained by the blues band Brat Pack, whose bass player is Eva Abesamis’ son, David de Koenigswarter.

The welcome bash was held at the scenic SM by the Bay of SM Mall of Asia. The Filipino fiesta-theme party featured a sumptuous spread of local cuisine from Café Adriatico and Vikings, as well as a special showcase of different types of lechon and local drinks from Tanduay, San Miguel and Don Papa Rum of Kultura.

enjoyed the great food while appreciating the great scenery by the bay, dahlings.

Other notable chefs present were Yoshihiro Narisawa of Japan, Karime Lopez Moreno of Peru and Nurdin Topham of Hong Kong.

Entertainment was provided by Team Vibe, an award-winning group of dancers.

“SM, through its partnership with Madrid Fusion Manila and the DOT (Department of Tourism), through Flavors of the Philippines, is simply fulfilling its mission to bring families and friends together in one fun place through the enjoyment of everything flavorful,” said SM Supermalls senior vice president Steven Tan.

The Catholic Women’s Club (CWC) will hold its 2016 Tea Party with the theme “La Dolce Vita” on June 29 at the grand ballroom of Manila Polo Club.

It will be the 95th staging of the annual get-together, said CWC president Estela Lopez.

The main attraction will consist of colorful performances featuring talented CWC dancers under the direction of popular choreographer Jeremy Vallejo.