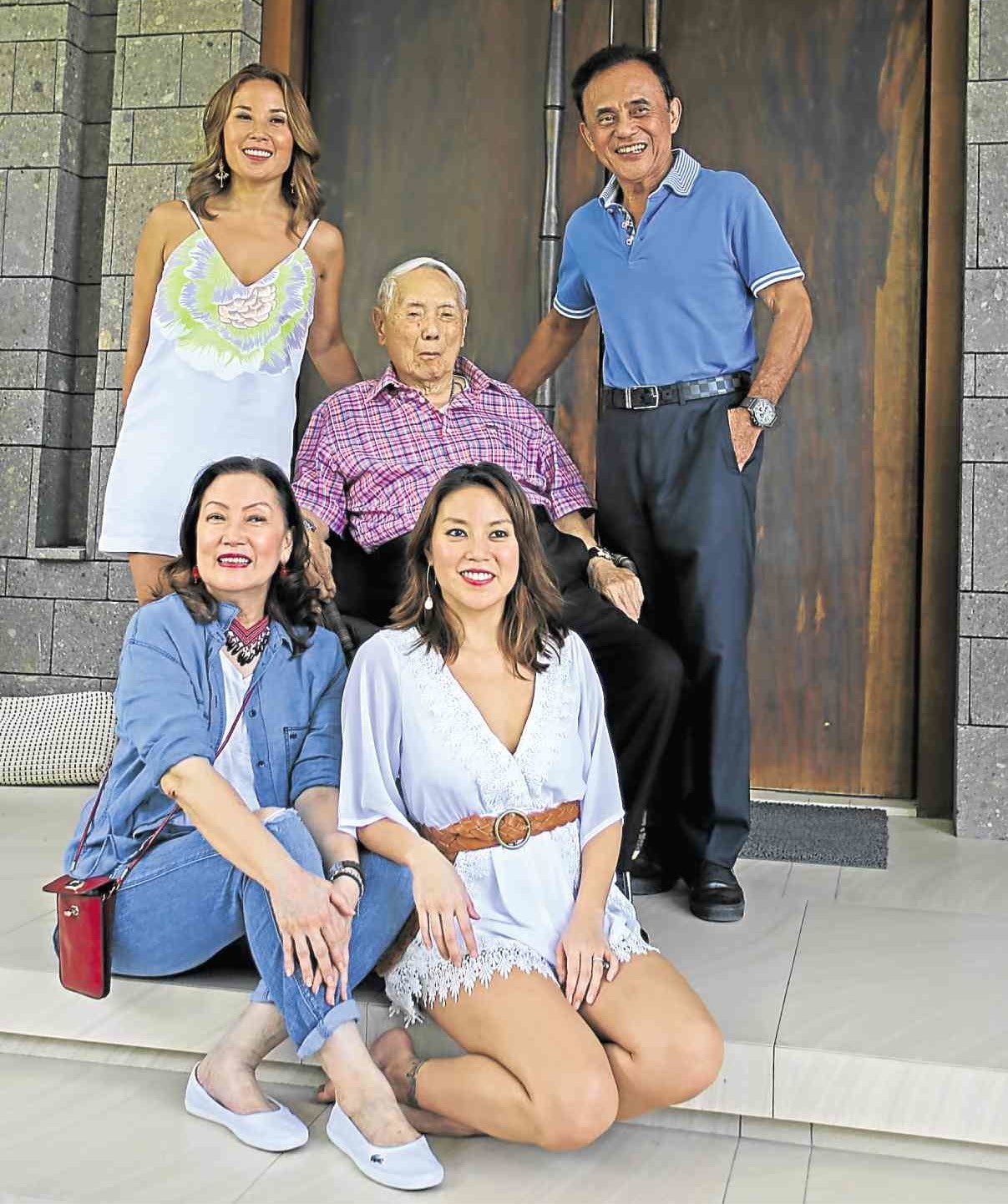 AT THE doorsteps of the Tantoco home in Sta. Elena, Ambassador Bienvenido Tantoco Sr. (center) is flanked by, standing, Katrina Tantoco- Lobregat and Bienvenido ‘Rico’ Jr., and, seated, Nena and daughter Bea

HER CHILDREN credit Nena Vargas-Tantoco for giving heart and soul to their beautiful home at the center of Sta. Elena Golf and Country Estates in Laguna.

On weekends and special occasions, the sprawling property overlooking a golf course (named one of the best outside the United States by Golf Digest) is the fun sanctuary of the Tantocos—headed by husband Rico, with their six children (Donnie, Robbie, Gippy, Katrina, Paolo, Bea; Joel passed away several years ago) and their growing brood of 15 grandchildren.

The house is fondly called “Villa Marina” in honor of Nena. Friends and family know only too well the infinitesimal details she gets into as homemaker and nurturer of her family—from the signature dishes that her kitchen produces (the latest hit is her homemade ensaymada), to the flower arrangements (she started Rustan’s Flower Shop), to the furniture selection (she likes them huge and cushiony so that her grandchildren can romp and tumble on them).

First-time visitors to the house will also get a glimpse of Nena’s spiritual bent. Inspirational quotes are written in chalk on boards scattered all over the home and in the garden.

Lunchtime last Tuesday, when Rico, Nena and their daughter Katrina (now Lobregat) welcomed the lifestyle media to Villa Marina, the matriarch could only smile in acknowledgment as Katrina explained her mother’s role in their lives. The sumptuous lunch was dubbed “Off the Eaten Path.”

Nena turned to Rico, executive vice president of Sta. Elena. She pointed out that it was his vision of a home close to nature that set the tone for unforgettable quality time.

In a huddle with reporters, Rico announced Sta. Elena’s plans to put up a world-class country club and expand its residential villages to include Banahaw, Sierra Madre, Makiling and Gliceria Place.

Still, it was apparent that Nena, the catalyst that drives the family forward, was the inspiration behind the move.

Katrina described their home in Sta. Elena as “a space with soul. And at its heart is a woman, the heart of our family that allows us to be the best version of ourselves,” referring to her mother.

The Sta. Elena estate celebrates its silver anniversary this year. Construction of the golf course began in 1991. It opened in 1994. Development of the villages followed soon after.

Even before it was completed, it was there where daughter Bea held her wedding reception in December 2013.

Nena acknowledges the emotional investment poured into the home. “It reflects all my heart, my hard work. This home is a dream but Sta. Elena is Rico’s bigger dream. He had always wanted a world-class golf course,” she said.

Rico’s affection for golf began when he was five years old, as he spent hours watching father Bienvenido Sr., the country’s erstwhile ambassador to the Vatican, play the game at Wack Wack in Mandaluyong.

When he turned 11, Rico hung out with caddies who taught him to play. Later, he would do the rounds of local golf courses as he perfected his swing.

Rico told Inquirer Lifestyle that the Sta. Elena golf course has become a necessity, given the daily stress of life in the city.

A previous government stint required Rico, a low-key arborist, to lead efforts in reforesting great swaths of barren land across the country, including the successful reforestation around La Mesa Dam. This was how he learned about trees, their various habitats and their important role in the Earth’s natural balance.

The experience also reminded him constantly about his childhood—a young boy biking from their house in Forbes Park to the future site of Rustan’s Makati along Ayala Avenue.

“There were hardly any cars then,” he recounted. “It was safe to go around. My dog ran alongside as I pedaled.

“And there were birds called batu-bato that I would see often.”

Obviously, the big city has become very different now. Rico’s vision of a more natural environment, like the old Makati he grew up in, is what he insists his children and grandchildren must enjoy. Hence, Sta. Elena.

Nena has one basic rule for family members and household staff in Villa Marina: Nobody leaves on an empty stomach.

She is very strict about this, especially in the case of workers and guests from neighboring communities. The family is blessed, and blessings must be shared.

She is also busy training those from neighboring communities in arts and crafts. Fallen trees around the Sta. Elena property are collected and turned into wood statues. Proof is how Villa Marina’s backyard is laden with reindeer with twigs for antlers.

“We do crafts. We plant. I want a community that is very holistic, with people working together in harmony to make life better,” she said.

Nena thinks her early exposure to crafts set her out to a path helping others while tapping into this talent.

When she was a young girl, her mother Mameng Vargas, aunt Pacit and grandmother Lelay spent a good part of the day making crafts.

“I didn’t study but I learned while watching them,” she recalled.

When she married Rico, mother-in-law Gliceria, who founded Rustan’s with the ambassador, noticed her way with flower arrangements and offered her a part-time job at Rustan’s as a flower arranger. This was as sister-in-law, Menchu, the one in charge, was set to transfer to Rustan’s Supermarket.

In time, Nena was appointed Rustan’s visual merchandiser. Her artistic skills helped set the store apart from the competition.

She’s still at it, Nena said. Only this time, the venue is Villa Marina. She wanted to showcase Filipino crafts and culture and got her wish.

The mostly wood-and-straw furniture complements the hardwood and indigenous trees around the property.

“Before we got the 260 hectares that is now Sta. Elena, this was a sugarcane field,” she recalled. “I grew up in Negros where the family was also engaged in sugarcane. Don’t you think this is coincidental?”

Villa Marina’s corners are filled with santo. An image of the Blessed Virgin Mary greets guests at the foyer. On the far left wall is a poignant sculpture of the Divine Mercy made by a local artist. Below it is a resin copy of the Infant Jesus sleeping atop a Cross. Tantoco said the original is a gift from her father-in-law.

There is also an antique St. Joseph that welcomes people along the path that leads to the main house.

Nena said she wants a home that reflects “the life of God in Jesus. We believe in bringing the good, in sharing great stories to make the world a better place.”

Get out of the city

She also noted that the lunch’s theme, “Off the Eaten Path,” reminds people of “the need to get out of the city, the noise and the stress.”

The Tantoco couple spend more time in Villa Marina than in commercial centers where the family’s retail businesses operate.

Said Rico: “Sta. Elena is an intimate community. We breathe fresh air amid lush greenery. We have space where a wide range of flora and fauna flourish. Representatives from the University of the Philippines in Los Baños counted a hundred different bird species in the property.”

He added: “This is where the soul can be at peace. At the same time, Metro Manila is just 45 minutes away so you’re always close enough to where the action is.”