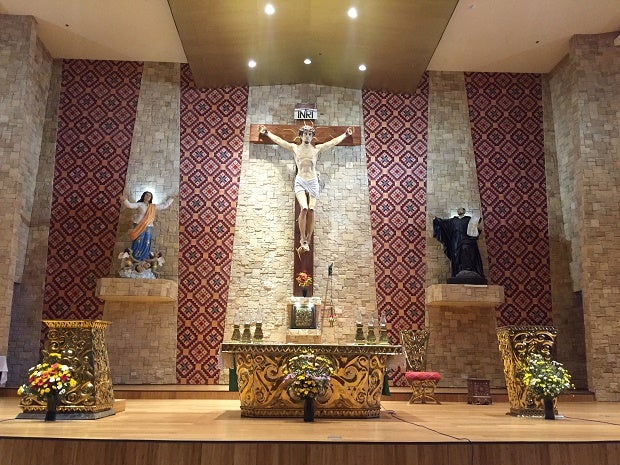 DAVAO CITY — Upon entering the Chapel of Our Lady of the Assumption, one is seized by the sight of an “indigenized” Virgin Mary wearing a turban.

The oil painting, donated by Davao artist Mark Tolentino, serves as the centerpiece for the first part of the chapel, which only shows the altar and not the Cross.

Ateneo de Davao University president Fr. Joel Tabora said such a feature encourages Muslims to enter the house of worship in line with the institution’s mission to promote inter-religious dialogue.

In a blog post, Tabora explained how Muslims “deeply revere Mary with us as Sitti Maryam.”

At both sides of the vestibule are two large indigenized murals also by Tolentino. On the left is “Jesus in the Synagogue of Nazareth,” which shows Jesus in a Tausug chapel decorated by an eye-catching baluy talang or mat. The one on the right is “Jesus and the Samaritan Woman,” with the woman carrying a bamboo water container. Jesus is again clad in Tausug attire.

Tabora said they wanted the church’s design, which was conceptualized by Fr. Gabby Gonzales, to be Mindanao-inspired “and not just Western.”

Even the littlest of details exude Philippine art and culture.

The walls are decorated with sandstone from Cebu, done by special contract and request.

Tabora said the quarry where the sandstone was sourced from was already closed but the owners decided to re-open it upon learning that the materials will be for the construction of a church. They also liked the idea that Ignatius of Loyola will be celebrated there since their mother’s name is Loyola.

The mosaic panels adorning the altar walls are also from Cebu and are based on the design of Yakan fabric.

The stained glass and pews featuring similar designs were from Davao itself.

One feature that is not immediately noticed is the mural on the balcony, which includes a reimagined scene from the infamous Mamasapano encounter in Maguindanao, which left more than 60 people dead. It is part of the path to the darkness side of the mural, which is balanced by a path to light.

Jesus on the Crucifix was based on a Filipino model. The 9-foot Cross, which serves as the centerpiece of the university chapel, was carved by renowned Paete craftsman Paloy Cagayat from narra wood.

Meanwhile, the altar and podiums were created by Juan Sagid Imao from brass on stainless steel. The design is inspired by the Philippine Eagle. Tabora said in an earlier post that brass is “central in Mindanao’s celebration and music.”

Flanking the Cross are the statues of Virgin Mary in “Maranaw-inspired” attire and St. Ignatius of Loyola.

“Really, we wanted a place where people at the Ateneo de Davao could pray and worship,” he said as he toured INQUIRER.net inside the breathtaking structure. “(Part of) the mission and vision of Ateneo … is inter-religious dialogue and intercultural dialogue.”

Because of the renovation, the chapel can now accommodate 700 churchgoers and even those from different faiths. CDG/rga