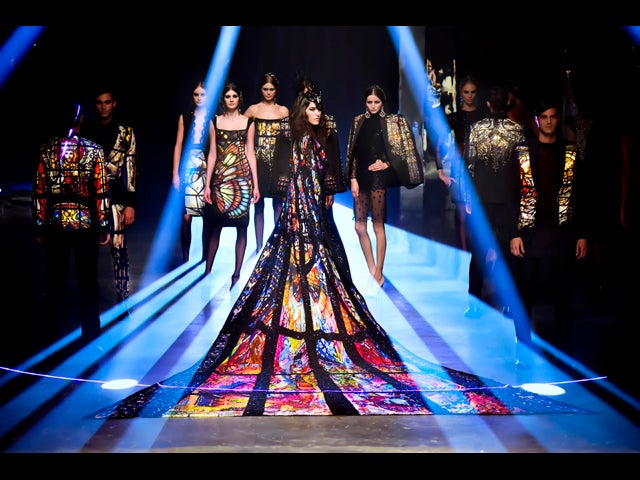 Michael Cinco will present his collection in Paris during Haute Couture Week in July—a first for a Filipino fashion designer.

The Dubai-based designer will present his Fall-Winter 2016-2017 couture collection on July 3 in the highly exclusive Haute Couture Week.

His show will be presented by the Asian Couture Federation (ACF), of which he is among the 13 member-couturiers.

To show in Paris—and during Haute Couture Week at that—is a landmark achievement for any designer. Since the last century, the twice-a-year couture calendar has been presenting the collections only of revered houses like Chanel and Christian Dior—haute-couture companies belonging to the Chambre Syndicale de la Haute Couture. (Haute couture means everything is made by hand.)

Occasionally, the French governing body makes exceptions and invites guest designers and labels to be included in the calendar, as in the case of Cinco.

The ACF, set up in 2013, is endorsed by the French union. It’s a nonprofit that aims to “recognize, nurture and promote Asian couture talents” to a global audience.

Its honorary president is renowned Japanese designer Kenzo Takada, founder of the Kenzo label, and founding chair is Frank Cintamani, chair and founder of Fidé Fashion Weeks in Asia.

Cinco was invited to be the first Filipino member of the ACF and one of the 13 founding members designated as “Asian Couturier Extraordinaire,” joining big industry names from all over Asia, such as Guo Pei of China, Lie Sang Bong of South Korea and Yumi Katsura of Japan.

His fellow Dubai-based compatriot, Furne One, is also a member.

“This show is very important to me,” says Cinco, who moved to the oil-rich gulf city in 1997. “I have worked hard for this. Hopefully, it will open more doors for me and other Filipino designers for them to showcase and market their labels worldwide. We have very talented Filipino designers who can compete globally and it is indeed an honor for me to pave the way for them.”

Apart from his couture collection, Cinco will also present designs for Couturíssimo, an online fashion retail platform to be launched by ACF.

“It will provide collections designed by the world’s leading couturiers at affordable prices and, in doing so, bridge the gap between couture and consumers,” says Cinco. “In this way it represents the ‘democratization’ of couture. While not couture in the traditional sense, the collections are designed and produced to the highest standard, and exhibit many of the elements and spirit of couture. The collections, of which one is mine, will be sold online via the Couturíssimo website and, in time, in leading retail outlets around the world.”

Both his collections are inspired by nature, and plays on the theme of flowers and butterflies “to match the softness in silhouettes and the dynamics of the collection.”

This proud Samareño is making sure he gives a nod to his Filipino heritage through his designs: There will be barong-inspired couture gowns with calado embroidery and solihiya weaving.

Cinco, 44, who grew up in Catbalogan, Samar, honed his couture skills in Dubai. Initially he worked for a fashion label, but made the big leap in 2003 with the launch of his eponymous couture label.

A one-time fine-arts scholar, he studied at Slim’s School of Fashion and Arts in the early ’90s and later at Central Saint Martins in London. He is known for dresses of elaborate, show-stopping workmanship that showcase the female form. His silhouettes are both modern and classic, their construction a product of exacting technical know-how.

Though his market remains the affluent women of the Middle East and elsewhere, Cinco has been presenting his collections in the Philippines for the last few years in Philippine Fashion Week. He was also the featured designer at the 2011 Red Charity Gala, possibly his biggest show here to date.