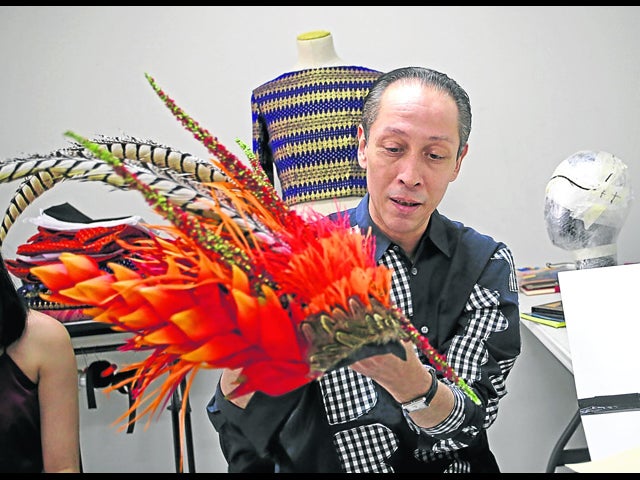 An elaborate headpiece of faux flowers, feathers and plumes

Ballet Philippines (BP) has tapped painter, author and fashion educator Mark Higgins to design the costumes for its reinterpretation of the Igor Stravinsky classical masterpiece “The Firebird,” to open its 47th performance season this August.

This is only the second time Higgins is designing costumes for ballet, and the process has been made more daunting by one little fact: He and his students at Slim’s School of Fashion and Arts are making the actual costumes.

Eighteen years ago, when Higgins worked on choreographer Agnes Locsin’s “Neo-Filipino” series for BP, he designed and merely draped the jersey fabrics on the dancers; it was the BP team that sewed them.

“The fact that we are actually making the costumes ourselves in the school has been an incredible learning experience,” says Higgins. “The construction of ballet costumes is really very particular in terms of durability and maximum movement. If you can imagine, it’s virtually like creating athletic sportswear in the guise of fantasy costumes.”

BP artistic director Paul Morales initially approached Higgins with the idea of restaging the Locsin piece, but later came to him with the new version for “The Firebird,” originally based on a Russian mystical folk tale of a magical bird.

The BP version is set in pre-Hispanic Philippines.

At the time, Higgins was working on a new collection of paintings for a solo exhibit, based on the ancient history of Southeast Asia. He thought Morales’ offer would add a new dimension to what he was working on.

“It would feel almost like bringing my new paintings to life, and translating them into dance costumes,” he said. (Some of his works, old and new, will be exhibited at the CCP lobby during the performances of “The Firebird.”)

“My peg for the look of the ballet was the Boxer Codex,” he says, referring to the 16th-

century illustrated manuscript depicting the ethnic groups of the Philippines and the Far East.

“Most of the people depicted in it from what became the Philippines are wearing the most lavish gold crowns, neckpieces and jewelry. So we created versions of those items. Some of the textiles in their clothing are silks that look very Indian, because of trade links with Java and Sumatra—and curiously enough, none of them are wearing any kind of ikat or very ethnic-looking weaves, which I found refreshing. So I combined the idea of this look with the aesthetics of the Ballets Russes, a subject I was very familiar with and fascinated by since my early college days.”

Higgins designed up to 35 costumes for this ballet, a play on distinct elements like gold, spices, porcelain —objects of trade among Chinese, Indian and Arab merchants in the ancient times.

The diversity is also underscored in the costumes, to identify the dozens of kingdoms, sultanates and indigenous groups in the Philippines in the pre-Hispanic era.

He dresses Prince Ivan, the male lead, in royal blue velvet with trims of gold and pearls, his hairstyle and crown based on a fresco in a cave in Dunhuang, depicting Asiatic and Oriental people along the ancient Silk Road.

The female lead, Princess From The Land of Spices, wears a crown of cinnamon, star anise and nutmeg.

Higgins and his students handpainted the dresses of the 12 princesses (corps de ballet), depicting them as porcelain dolls. The 12 princes are lavishly dressed in rich brocades, tapestries and textiles that would have been found in this period from various exotic traders.

“Everything we did was experimental,” says Higgins, who collaborated with the ballet’s overseas-based choreographer George Birkadze. “Visually, George gave his okay. We’re only waiting for him to arrive and for the rehearsals for technical adjustments. In ballet they want the limbs to be seen, so I’ve had to make certain changes…

“Nobody’s used to doing this. Construction of dance costumes is so different, even from theater costumes. There were lots of learning even on my part. I kept calling Paul to ask technical questions. It’s not something you normally learn in a patternmaking course.”

Higgins’ long-term goal is to develop a program to teach students the skills for costume design. “If you look around you, theater is flourishing here, from the small, independent theater companies to the gigantic casino theaters with thousands of seats, all of them needing content and some forms of costuming.”

He already has another job lined up in a major production with one of the casino theaters, and will involve as many as 80 costumes.

His student-collaborators have had to unlearn many of the things they learned in pattern-making in putting together the costumes. He handpicked the same tried-and-tested students from last year’s Bench terno ball.

“It’s opposite of what they do in actual projects,” says their mentor. “They’re taught to make clothes that are scrutinized up close. These costumes are seen from afar, so many details get lost. This is a great experience because it teaches them flexibility.”

Higgins gazes lovingly at an elaborate headdress of orange plumes, faux flowers and striped feathers. He had handmade it himself, not wanting to delegate the task.

Birkadze said he liked it, but felt the feathers were a tad long and may get in the way of the dancer.

“But I haven’t cut it yet,” he says with a mischievous smile, reluctant to mess with what he feels like already a perfect headdress. “I told him, let’s cut it when you get here. I’m having so much fun! I mean, if it’s easy, why do it?”