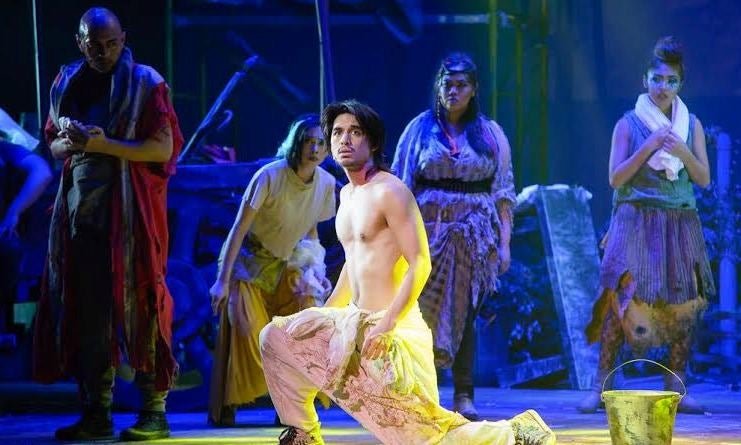 JEF Flores as Jesus Christ about to be baptized by John the Baptist (OJ Mariano). JAYPEE MARISTAZA

MusicArtes Inc.’s “Godspell” is a river of good intentions and thought-provoking vision. Yet this river tends to overflow, and the deluge isn’t “all good gifts,” to borrow from one of its songs.

There are compelling reasons that make this “Godspell” worth a look. Chief among them is director Anton Juan’s mission to “re-do this musical in more profound connection to the mission of social justice,” as he writes in the director’s notes.

Anyone who knows “Godspell” knows how light and lighthearted it is, an easy-breezy, essentially plotless collection of New Testament parables set to song by John Michael Tebelak and Stephen Schwartz (of “Wicked” fame).

The mere mention of profundity sets it up as a transfiguration not to be missed.

And to some extent, it does deliver on that promise. This “Godspell” means to reach deep into your conscience and stir your social consciousness. In its finest moments, it spins music, movement and scenery into spellbinding instances of theatrical poetry reflective of our troubled days.

It begins with the transposition of the musical’s setting to a junkyard, where the cast plays out the Biblical scenes garbed in raggedy silhouette costumes (the production designer is Otto Hernandez).

Where are we, and who are these people? Gypsies from the Bosnian War? Extras from Disney’s “The Hunchback of Notre Dame”? A low-rent production of Andrew Lloyd Webber’s “Cats”?

Specifics no longer matter here, because as soon as this “Godspell” starts, it becomes a sociopolitical road trip.

Video projections loom large on the wall and accompany the songs and all the talk in between. Time becomes irrelevant: John Paul Sartre, Adolf Hitler, Donald Trump, the Lumad killings, and, most notably, the Syrian refugees all appear in this production.

This is how Juan’s “Godspell” becomes a two-and-a-half-hour reminder of how and why we’ve arrived at this point in history, the simplicity of those Biblical tales ingeniously contrasted against the perfect images.

At one point, there is mention of thieves, then Mike Alquinto’s viral photo of Gloria Macapagal-Arroyo receiving holy communion fills the wall.

This production is the director’s mind laid bare. This is Juan as champion of the oppressed, and theater as indictment of our society.

It is powerful this way. It also feels too long and tends to get exhausting.

Part of its seemingly unreasonable length can be blamed on the gimmickry fueling (and bloating) this production. Skits are expanded, games  introduced, and there’s even a sing-along portion.

They don’t work all the time, however, and not always do they feel necessary. The Parable of the Prodigal Son with Japanese characters is downright funny; the dragged-out audience-participation segment using charades can be snipped out.

It’s times like this that make you wonder how the director couldn’t just trust his actors and the song numbers to shine through on their own—they’re already working with Ejay Yatco’s subtle but effective restyling of the score, for starters.

Speaking of the actors, here’s another heretic thought: More critical observers of the musical theater scene might find some of the singing slightly underwhelming, considering “Godspell” essentially plays out like a protracted concert.

The main attraction here is really Jef Flores, whose Jesus can only be described as divine. Not only does he look the part (based on how centuries of paintings and pictures have depicted the Christ), he also exudes charisma and has that Messianic, follow-me-to-the-ends-of-the-world manner of speech down pat.

“Beautiful City” is also the only number in the show left unapplauded, so poignant and evocative is Flores’ rendition of his character’s solo.

The rest of the cast don’t get to distinguish themselves as terrifically, though, save for two: Maronne Cruz and Abi Sulit, as the “Learn Your Lessons Well” and “Bless the Lord” soloists, respectively.

Both first made their names through Ateneo Blue Repertory and have had  forays into the professional world; in “Godspell,” they finally leave their permanent mark on the audience’s minds.

In the end, it all goes back to Juan’s directorial and conceptual choices. The question now is: Where does one draw the line? Because there still has to be a line, despite one’s noble intentions and admirable beliefs.

Otherwise you get a production that starts out big and ends up cluttered, where points are drilled into the audience’s eyes to the point of redundancy.

Half the time, the video projections aren’t even clear because of John Batalla’s lights. (Make no mistake, the lighting is excellent, but the beams are too bright relative to the projections.)

Whenever this “Godspell” works, its elements cohering to produce a singular experience, it can be quite breathtaking.

But when it doesn’t, when it all teeters on the edge of self-indulgence and becomes a long-winded commentary of questionable purpose on the state of the planet, a glance at the exit and a stifled yawn are only reflexive.

A final illustration: Near the end of Act II, Flores as Jesus turns his back to the audience, his arms slung across a wooden pole; on the wall, as if a mirror, a painting of the crucified Christ. It’s one of the many striking images this “Godspell” has to offer.

Then comes a slew of Senakulo photos, and, what the exact purpose of this montage is, one can only imagine.

E-mail the author at [email protected] or visit him at vincengregorii.blogspot.com.