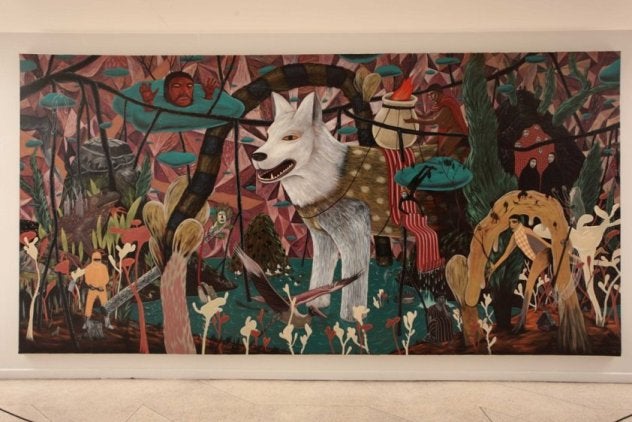 SINGAPORE—Filipino artist Rodel Tapaya won on Thursday night the grand prize  in the Asia-Pacific Breweries Foundation Signature Art Prize, an international art contest of Asia-Pacific artists, for a mural that weaves together ancient myths and folklore with current realities, such as environmental degradation and flooding.

Tapaya’s work, “Baston ni Kabunian, Bilang Pero di Mabilang (Cane of Kabunian, Numbered but Cannot be Numbered), bested 14 other mainly large-scale art works from 14 countries across the Asia-Pacifc. The shortlist of finalists was selected from among 130 works nominated from 24 countries by art experts.

Tapaya, 31, received 45,000 Singapore dollars. “I thank God, the greatest artist of all,” he said in his acceptance speech. He also thanked Ramon E.S. Lerma, director of the Ateneo Art Gallery, for nominating his work, and dedicated his victory to his wife, Marina Cruz, also a top young artist.

Three artists received the Jurors’ Prize:  Aida Makoto of Japan for his acrylic-on-canvas mural, “Ash Color Mountains”; Daniel Crooks of Australia for his video, “Static No. 12 (Seek Stillness in Movement); and Sheba Chhachhi of India for her installation, “The Water Diviner.” They received SG$10,000 each.

In a formal statement, the international  jury called Tapaya’s work, a 305 x 610 cm acrylic on canvas,” a compelling and monumental-scale work.”

“With its multiple narratives and diverse allegorical references, this stunning mural-sized painting embodies a vibrant strain in contemporary art from the Asia-Pacific region,” the jury said. “While Tapaya does not shy away from drawing on the folklore of his native region, his is neither a naïve nor self-exoticising practice. The artist is audacious in his use of the Philippine mural tradition as well as Latin American magic realism and Bosch-like phantasmagoria.

“Anchored in a postcolonial setting but with far-reaching universal relevance, the work will surely provoke discussion about emerging aesthetic tendencies in Asia-Pacific. Together with the three Jurors’ Choice Award winners, the prize-winning works are ground-breaking in their negotiation of cultural heritage and contemporary forms of expression. They are all worthy of recognition as being among the best art works from the region.”

Tapaya’s winning work was part of his 2010 solo exhibit and was bought by Troche Deleon Collection and Art Vantage Ltd, both international art buyers, although they only saw the work’s electronic images. Even before the art work could be shipped to the buyers, the mural, along with several others by Filipino artists, was nominated to the Signature prize by Lerma. “Kabunian” made it to the short list and the rest was history.

For the finals exhibit and judging, the work was shipped by cargo forwarder from Manila to SAM where it now hangs. On Thursday night, the Israeli buyers were invited to the awarding ceremonies where they finally saw for the first time the actual work and met the artist, who was the youngest-looking among the finalists.

In an interview with the Inquirer, Tapaya explained that he explored Bontoc and Ifugao myths as well as Tagalog folklore to paint an allegory. He said he had always considered “narrative painting” as his strongest suit and had always sought to tell moral tales when he paints.

The central image of his vast work is the Bontoc myth of a giant canine that saved humans from a great flood. On the back of the dog is an Ifugao mythological character, the son of the god Kabunian, who used a piece of cloth to form mountains and bring fire and warmth to humans. From Tagalog folklore (Tapaya is from Montalban, Rizal), he adapted the fable of a glutton who turned into a frog.

Careful regard for water and the sacredness of nature are apparent allegorical themes in the work.  A detail of the work shows a mountain denuded of trees and washing away the houses on its steep sides and another detail shows a masked logger cutting a tree which has the face of a man instead of a crown of leaves. The message is clear: by his greed, man brings himself disaster.

Organized by SAM and sponsored by the Asia-Pacific Breweries (APB) Foundation of Tiger Beer, the Signature Art Prize is a triennial art contest that started in 2008. For its second edition this year, it was expanded from the original 12 participating countries to include more countries, such as Australia, Bangladesh, Brunei, Indonesia, Japan, Korea, Myanmar, Nepal, Pakistan and the Philippines.

Tapaya’s winning work is now on exhibit along with the 14 other finalists until March 4, 2012 at the Singapore Art Museum (www.singaporeartmuseum.sg/signatureartprize).