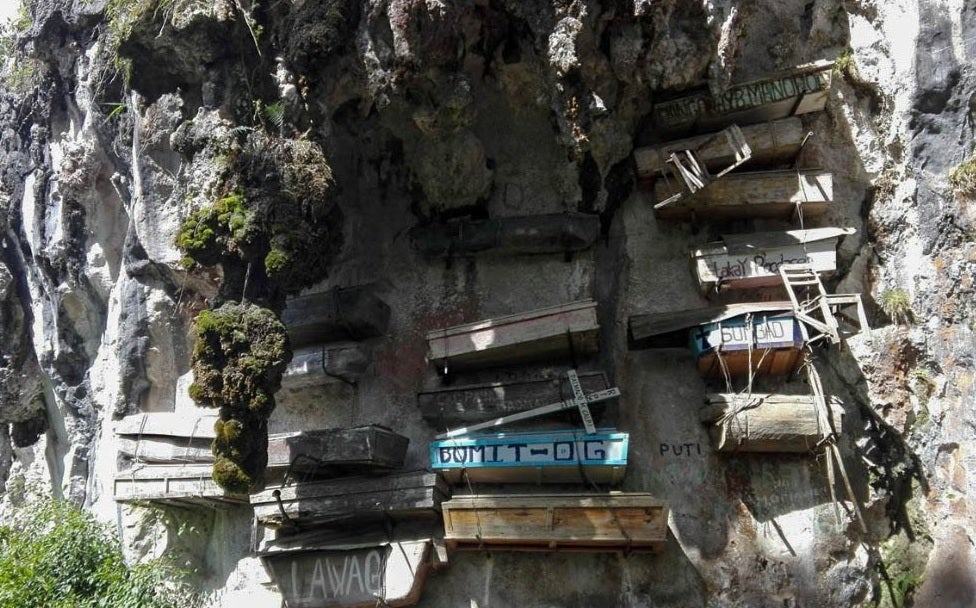 A government road-widening project in Sagada, Mountain Province is threatening the integrity of an ancient mummy burial cave in Ambasing Village.

The road-widening is part of the “convergence project” of the Department of Public Works (DPWH) and Department of Tourism (DOT) designed to ease traffic to and from the picturesque Mountain Province municipality.

The convergence project has irked residents who have criticized the local and national governments for their reckless disregard of environmental, heritage, and even sensitive cultural-religious concerns caused by public works in aid of tourism profits.

Earlier, residents and heritage advocates protested the felling of pine trees along the Sabangan-Sagada road.

The same project, they said, may affect the integrity of an unnamed burial cave in Ambasing village.

The ancient burial coffins will be spared, but residents and heritage experts noted that the project will encroach on at least a meter of the cave’s rim.

The construction racket may also damage the integrity of the ancient cave and undermine it.

Residents said that the project had been awarded to E.T. Latawan Construction.

The outgoing mayor of Sagada is Eduardo T. Latawan.

Latawan, according to the International Council on Monuments and Sites (Icomos) Philippines, has not heeded the appeals of Icomos and other heritage groups for the town to come up with an Infrastructure Guidelines (IG) and a Tourism Management Plan (TMP) to regulate tourism and construction activities so as to conserve Sagada’s natural and cultural heritage sites.

The DPWH and DOT appear blase or entirely ignorant that the burial caves are supposed to enjoy protection and conservation from the national government.

The declaration likewise covers the burial caves of Kabayan, Benguet.

“I hope that the local elders along with the local and national government can look into this and do the necessary investigations and stop destroying Sagada’s natural resources,” the Icomos official added.

Unregulated tourism, according to observers, has resulted in an uncontrolled construction boom as well as garbage and water problems. It has also resulted in road-widening projects which critics say would only aggravate the foot and vehicle traffic in this Anglican municipality but originally an Augustinian territory in the late 19th century.

“The problem with this rapid growth of construction is that Sagada (has a) dearth of plans for the uses of its lands,” heritage advocate and resident Celia Peñaflor wrote in her “Save Sagada” blog. “The National Building Code is nowhere near to being implemented, thus zoning ordinances are also still nonexistent.”

She wrote that Sagada residents were not against progress; they were for sustainable development and “responsible tourism.”

In an interview, Unesco National Commission of the Philippines Commissioner Eric Zerrudo explained that before a TMP or IG is crafted and implemented, the town should have an up-to-date comprehensive land use plan (CLUP).

With the CLUP, the town will be properly zoned which is needed for the crafting of the TMP, explained Zerrudo. CLUP would identify the zone areas, preservation areas, and high-traffic areas, he added.

Such sites should be declared first by the local government before a TMP is created.

TMP would then lead to the crafting of the infrastructure and activity guidelines which would identify the various tourism activities and set rules on the construction of structures and facilities.

Zerrudo said the intent of convergence project is good “but they (DPWH and DOT) should have considered that part of a tourist destination are the heritage values which include the spirit of the place.”