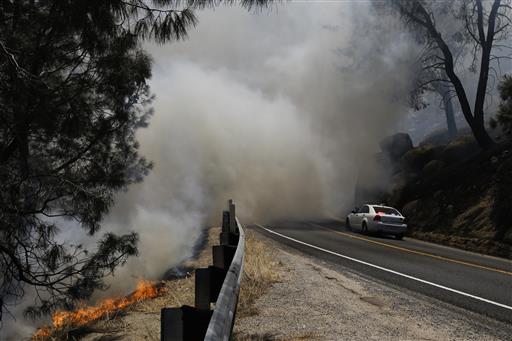 A wildfire burns on the hillside of Lake Isabella, Calif., Friday, June 24, 2016. The wildfire that roared across dry brush and trees in the mountains of central California gave residents little time to flee as flames burned homes to the ground, propane tanks exploded and smoke obscured the path to safety. AP

LAKE ISABELLA, Calif.  — A vast and voracious wildfire that has burned at least 80 homes in central California killed an elderly couple as they tried to flee, authorities said.

The two were outside their house when they were overcome with smoke, Kern County Sheriff Donny Youngblood said at a Friday evening news conference on the fire that has burned nearly 47 square miles and forced the evacuation of 1,500 homes near Lake Isabella, a popular recreation area east of Bakersfield.

The names of the two dead, whose bodies were found Friday, have not been released. The sheriff said his department hasn’t been able to search very extensively and would be looking through burned homes with cadaver dogs seeking more possible victims.

At least 80 houses were destroyed as the fire leveled neighborhoods and forced thousands to flee.

David Klippel, 78, a retired police officer, said he didn’t see much of a threat after receiving an automated call advising him to leave. That changed dramatically within an hour Thursday afternoon.

“I’ve never been so close to a fast-moving, ferocious fire. It was unbelievable,” said Klippel, who later learned his house had caught fire. “I almost didn’t have time to get out.”

Neighborhoods of mobile homes were charred to their foundations. Gusty winds pushed the flames and smoke farther into drought-starved terrain. The fire is 5 percent contained.

“The forces of nature collided with a spark,” Kern County Fire Chief Brian Marshall said. “The mountainous terrain, five years of drought and wind gusts of over 20 mph all drove a fire over 11 miles in 13 hours.”

The fire tore through small communities of houses and mobile homes that surround the lake — actually a reservoir — and the Kern River, a popular spot for fishing and whitewater rafting. The communities are nestled in foothills of the Sierra Nevada, a mountain range that runs hundreds of miles north and south through eastern California.

Scorching heat and tinder-dry conditions across the West have contributed to massive wildfires in the past week that have destroyed properties and sent residents to seek shelter and hope for the best.

Laura Rogers was one of those who thought she’d never see her home or her brother’s home again. Instead, she was lucky to find both standing in a neighborhood of mobile homes that was devastated.

“I was sure this place was gone last night,” Rogers said through tears as she gestured at the destruction around her. “I mean look at this, I can’t believe it. It’s like a scary movie.”

The downspout of her brother’s home was melted on the ground, but the structure was intact.

The California blaze erupted quickly, putting some 1,500 homes in jeopardy. Officials said they expect to find many more homes destroyed as the smoke clears and they do a more thorough check of smoldering neighborhoods.

Gov. Jerry Brown declared a state of emergency, freeing up money and resources to fight the fire and cleanup its aftermath.

Dramatic video from Thursday night showed homes fully engulfed and others already gone as propane tanks flared up and popped. Flames glowing in the steep, rocky hillsides were reflected on the lake.

Residents described a frantic flight from communities surrounding the lake, a dammed section of the Kern River that is a destination for boating, fishing, rafting, hiking and camping.

Cachet Kirby, 22, of Mount Mesa and her neighbors grabbed clothes, blankets and their dogs and fled through thick smoke as flames charged down the slopes. “It was to the point you couldn’t see, you couldn’t breathe,” she said.

She and others, exhausted Friday morning after little sleep in shelters and cars, were desperate for information about their homes. “We could have gotten lucky and the wind shifted, or our house could be burned down,” Kirby said. TVJ