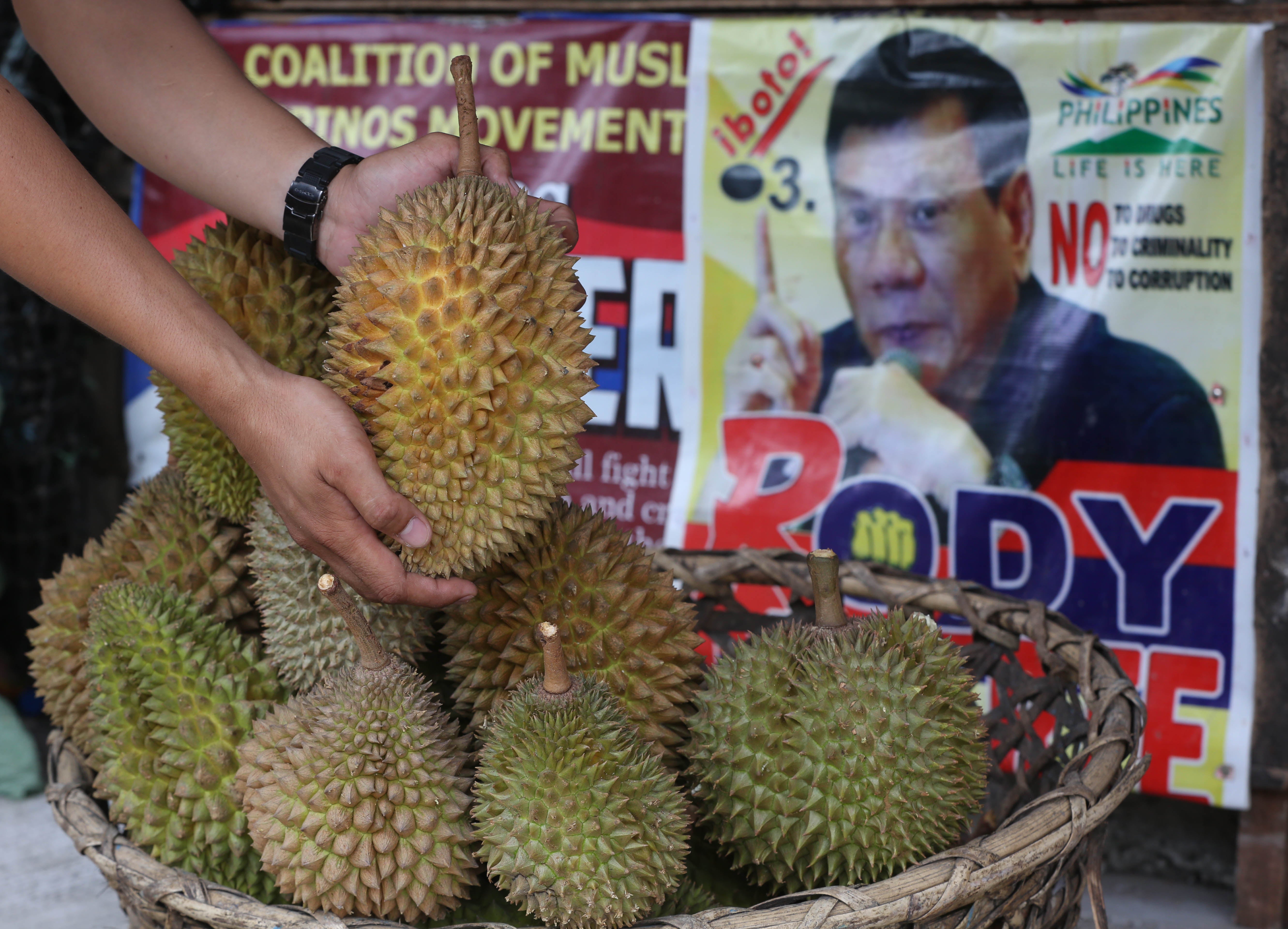 Durian as aphrodisiac: Myths and legends about Duterte’s favorite fruit

The world is looking more closely at Davao these days since the 16th elected President of the Republic, who will be inaugurated on June 30, hails from there.

Let’s then go back in mythical times to see what Davao was like and how her famous fruit, the durian, originated in myth.

As a frequent Davao visitor, I’ve always associated the city with the durian fruit, an acquired taste, mind you, because a writer friend had told me, you can’t call yourself a “Mindanaoan” if you don’t eat durian.

Since then I have always enjoyed eating durian with friends from shabby, wooden table and chairs along Davao’s fruit stands, at Magsaysay Park, or getting durian sweets at Lola Abon’s, or enjoying durian ice cream in one of the city’s numerous restaurants.

In Iligan City where I am based, residents enjoy durian coffee and durian shake at the famous Iliganon resto-bar.

The other year when I did research on nature and setting in selected Japanese and Mindanao folk tales for a Sumitomo Research fellowship, I included in the study “The Legend of the Durian” retold by Jose Manuel Torrento and, with it, a glimpse of what Davao was like as told in myth.

Here are two known versions of the “Legend of the Durian.” Both elicit the metaphor of love and how the two heroes in the tales differ in their quest for it and how love can be had out of great sacrifice, patience and determination and that only the gods know of its secret.

This version retold by Jaybee Arguillas is about vengeance and the lack of faith taking the best of a naturally imperious Datu. His wife was a snake in reality. It expressly narrates two characteristics of tribal life where the Datu has absolute power and, the justification of vengeance for a dead or murdered parent or sibling.

As told, the Datu’s wife was a snake who took the form of a woman to avenge her mother Mikunawa’s death in the Datu’s hands. She had danced before the Datu, making him marry her.

When she was about to give birth to a son, she told the Datu not to enter her room until he would be called in. But, as all absolute rulers go, the Datu grew impatient. To his shock, the Datu saw that his wife-turned-snake was giving birth to their son. The snake-woman faced the Datu and said she did what she did to avenge her mother whom the Datu had killed. Now, she said, you have to raise our son alone but on his 16th birthday he would die. After saying this, she quickly disappeared.

The Datu was left to rear his son alone whom he named “Durian” (Little Horn) and he forgot about the curse. When the son Durian was almost 16, he sickened and died. Grief-stricken, the Datu never left the gravesite until he himself became ill and lay dying but not before he observed a “green ribbon” coming out of his son’s grave until it grew into a large tree. He heard the Great Manama’s voice who told him that the tree was a memorial to his son and its fruit would feed his people long after he was gone.

The second version is from the Bagobos of the Mindanao and it shows the durian’s restorative, rejuvenative and, yes, aphrodisiac qualities.

The setting describes how the folk in early times enjoyed the natural bounty of an unpolluted land, Davao having been blessed by the gods.

In this kingdom, all people lived long owing perhaps to the unpolluted environment. Most of all, Bagani (brave hero), leader of the Bagobos became lonely for he had no wife or children.

At the age of 173, he fell in love with Madayaw-Bayhon (“She who is beautiful of face”). Her beauty was likened to bedewed flowers at dawn. She had long lashes and her lips were likened to “fire orchids,” and her skin was like “white sand bleached in the sun”—the adjectives taken from the natural environment—quite refreshing, and a rest from Western allusions.

This version about the durian or “fruit of love” is rich with allusions from nature. The setting was during a time of peace and plenty. When Bagani ate of the “odoriferous” fruit he became young again, and his wife,

Madayaw-Bayhon, finally fell in love with him and rushed to him after her having taken a bite of the same fruit—proof that the durian was also an aphrodisiac.

Such description of the manner in which the young wife “fell” for the husband who had regained his youth after having a bite of the magical fruit suggests that the wife had become, akin to what Sarah Blaffer Hrdy, as quoted by Donna Harraway, calls the “sexually interested” or “sexually receptive” [human] female, in this case.

The tale is, in fact, quite Asian too, with the emphasis on “face” as significant in attracting any male, especially a politically powerful alpha male.

The setting of the tale is described as “a kingdom in Maguindanaw” nestling like “a green gem” among the foothills of Mt. Apo, whose tall peak reaches “the very roots of heaven”—abode of Mandaragan, chief of the Bagobo gods.”

Mt. Apo today has remained a mystery although many climbers have tried to conquer it and often, in the process, risking or losing their lives. But there is no debate that in numerous Mindanao tales, the mountain is either mysterious or sacred. It has its own power and people attribute value to such a high mound where the clouds beyond the ridges often settle.

Bagani, a conqueror of many lands, ruled this most alluring of environments and people like him, were happy and contented. It was an earthly paradise.

But Bagani did marry; however, every time the young wife would miss her father Kudehrat’s kingdom, she would leave Bagani’s kingdom without his permission. Kudehrat’s name in the narrative came as a surprise. Historically, Sultan Kudarat (Kudehrat) was the most powerful of all Maguindanaoans and adjacent regions during his lifetime.

In the legend, however, Bagani was more powerful, and Kudehrat the father, would sail and return his spoiled daughter Madayaw-Bayhon to Bagani. This happened often and Bagani grew tired of this and demanded a solution from his most ancient adviser, the 600-year-old Tageb and his 15 other advisers, who were just as ancient.

Datu was advised to see the 2,700-year old hermit, Matigam, who was half-mortal, half-god. His power was such that once he had transformed the proud princess of Daba-Daba into a Waring-Waring, a wild orchid known today as Waling-Waling, a sought after, expensive variety of orchid.

The wise hermit prescribed three things for Bagani to gather: the egg from a black Tabon bird (Tabon is a white bird), milk from a white carabao and nectar from the Tree of Make Believe hidden in the hair of the wood nymph.

Of course, with the help of the Sea nymph, Punta Dumalag, Bagani was able to get the black Tabon’s egg from the navel of the sea; the milk from the white carabao which his people had gathered; and, the nectar from the blossom of the Tree of Make Believe hidden in the hair of the Wood nymph through the help of her sister, Hangin-bai (Air nymph).

Bagani brought the ingredients to the wise hermit. The hermit cracked a portion of the black Tabon’s egg, then poured the milk from the white carabao and the nectar of the flower from the Tree of Make Believe. He then stirred the mixture inside the egg and returned the egg intact, to Bagani.

The wise hermit instructed Bagani to plant the egg in the royal garden and asked that he be invited to the celebration only when Bagani’s plan turned successful.

A great feast was held. Bagani invited everyone but he forgot to invite the wise hermit, Matigam. In anger, Matigam transformed the fruit by having this covered with thorns and whoever would hold it would “spill his blood” and, instead of the sweet scent, he said “whoever eats them will foul his breath.”

Since then, the “magic fruit” or durian (full of thorns) has turned “odoriferous” as punishment of Bagani’s lack of gratitude.

This version of the Legend of the Durian is more indigenous for its specific use of place names, Daba-daba Gulf (Davao Gulf), Maguindanaw (Maguindanao), Baguio, Samal, Talicud and Ligid, the reference to Mt. Apo, and of natural elements, flora and fauna of the environment (waling-waling, kalaw bird, tabon bird, crows, fire orchids, white sands) from which they are found to this day.

The egg of the Tabon bird plays a prominent symbol in the Bagobo version of the durian tale because it marks the beginning of the happiness of Bagani beside his wife, Madayaw-Bayhon—a reminder of the ancient Greek myth where Leto hatched the sun and moon out of an egg and that of the ancient Egyptians where Hathor hatched the “golden egg” of the sun at the beginning of the world.

The author is head of the National Literary Arts Committee of the National Commission for Culture and the Arts. She is a senior faculty of the Department of English and the director of the Office of Publication & Information, of the Mindanao State University-Iligan Institute of Technology in Iligan City.