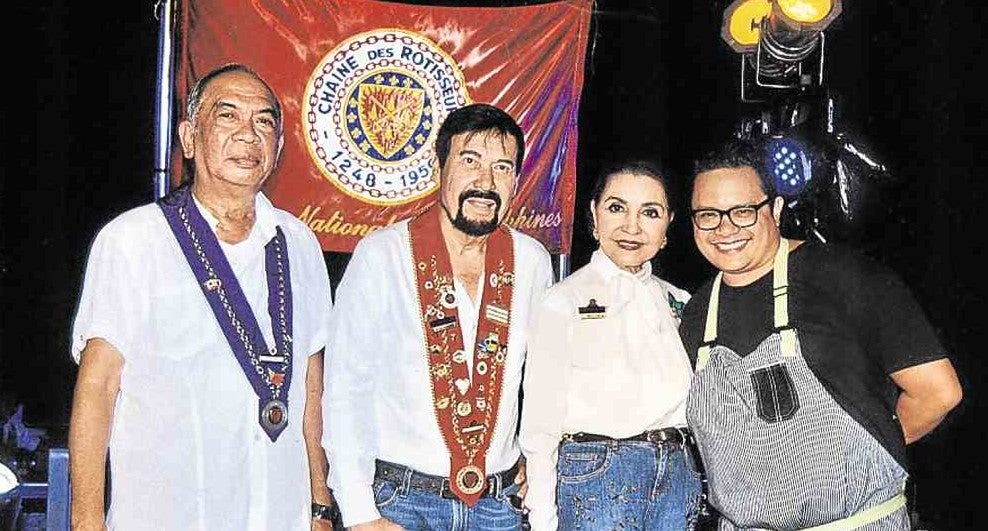 “THE DAY, or the night, was chosen because there would be a full moon,” said James Montenegro about the recent fellowship of La Chaine des Rotisseurs–Cebu chapter at the scenic Crimson Resort in Mactan.

It was a white night at the resort’s Azure Beach Club with most everyone in blue denims and white tops, enjoying the moon shine and cool drinks. All had come to feast on a menu prepared by two chefs in tandem—Crimson’s very own executive chef Godfrey Laforteza and visiting Filipino-American celebrity chef Dale Talde, who is based in New York.

They both circulated among the 85 who had signed up for the dinner, sampling the substantial pica-pica passed around. Dinner was announced when the chefs were ready, and everyone trooped to another level of the terrace laid with elegantly decorated tables.

Angie Mathieu came with her son Mickey Paulson and their friend Wibitz Williams. From the Chaine’s Cebu board were Dr. Nestor Alonso with his wife Joji, Dr. Vivina Chiu Yrastorza and Winglip Chang.

At the moment, Amparito  is in California enjoying a vacation to spend time with Monique and Tom Bugbee and the grandchildren. She is expected back in Cebu by the end of June.

There may be two fellowship dinners scheduled between now and December. The anniversary gala for La Chaine in Cebu has been tentatively set for Dec. 9 at Shangri-La’s Mactan Resort & Spa.

Speaking of gastronomy, Cebu gourmets and gourmands are looking forward to the opening of Pig and Palm, a new restaurant that is the concern of Carla and Chris McKowen.

They are partnering with Jason Atherton who has three Michelin-starred restaurants in London. His wife Irha hails from an island in northern Cebu. They live in London with their two daughters.

Pig and Palm is set to open to the public on July 26, at its plush location in the MSY building of Ayala Land’s Cebu Business Park. It belongs to Carlos and Mariquita Yeung, parents of Carla.

Golden Prince Hotel and Suites, centrally located along Acacia Street near Ayala Center Cebu recently held a bash to celebrate the expansion of its services and the opening of several dining outlets, wellness facility and gym.

Welcoming everyone were its president Benedict Que with his wife Teresa; Aaron Que, vice president for corporate communications; and their brother Vincent Que.

The Zonta Club of Cebu I held its induction of officers for the next two years at Salon Granada of the Casino Español de Cebu, which was decorated for the occasion with beautiful long-stemmed roses (one meter long).

They were a gift from Antonio Chiu, honorary consul of Solvakia, to his wife Nellie Go Chiu, outgoing president of Cebu Zonta I.

Cebu Vice Governor Agnes Magpale was present, seated in a place of honor beside Anita Sanchez, past Zonta Area 3 director who announced the officers to be installed.

Mila Espina hosted the program which she livened up with the announcement of the four best-dressed Zontians: Rosita Arcenas, Letty Canoy, Ellen Luna and Melanie Ng, who also happens to be the new president of the Cebu Chamber of Commerce and Industry.

They drew a rolled paper that identified them as goddesses. Rosita was of the seas; Melanie, the forests; Ellen, the stars; and Letty Canoy the queen of them all.

They were serenaded by Myles Ng, Melanie’s talented son. More entertainment came from Tessie Javier, and Larks and Nightingales, scholars of Amparito Lhuillier who was present.