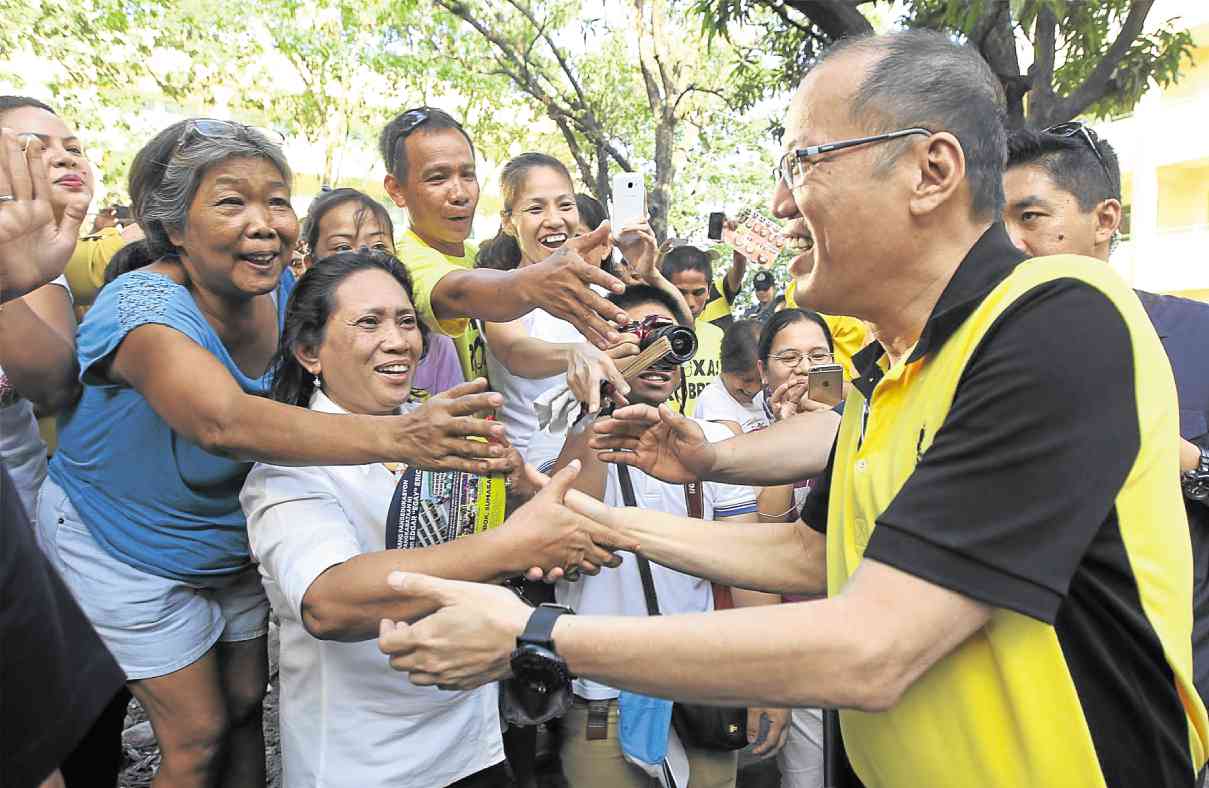 My most memorable moments covering P-Noy

WHAT DO you do when you get an unexpected call from the President of the Philippines?

It was late November 2013. I was at lunch with colleagues when my phone rang. The voice on the other end was a bit frantic.

“Why aren’t you picking up your phone?” Undersecretary for Communications Rey Marfil asked.

I told him I didn’t hear it ring. I stared at the half-eaten chop suey and fried chicken on my plate.

I forgot about my lunch. I cradled my phone between my ear and shoulder, wiped my hands, and frantically dug for my pen and notebook in my bag.

OMG. President Aquino wanted to talk to me.

I wasn’t even a Palace reporter that time. I was covering Defense.

In an event earlier that day at Camp Aguinaldo, where the President was guest speaker, Marfil asked reporters to list down the questions we wanted to ask Mr. Aquino.

I wrote, “Are you ready to concede that you made a mistake in telling CNN that the death toll from Yolanda was only 2,000 plus?” I was referring to Mr. Aquino’s interview with CNN anchor Christiane Amanpour a few days after Supertyphoon “Yolanda” slammed into the country.

Reporters like me who rushed to Tacloban the day after the typhoon knew, by just scanning the town, with all the dead bodies around us, that the number of fatalities was not just 2,000. Two weeks passed, and the number had doubled.

The President didn’t give an interview after the Camp Aguinaldo event.

Marfil said he was going to call back in a minute. When the phone rang again, it was Mr. Aquino’s executive assistant, Asec. Jun Delantar, on the other end of the line.

“Asec, kinakabahan ako…” I said. I think Delantar chuckled. Then I heard that familiar deep voice on the other end of the line: “Kinakabahan ka raw?”

President Aquino said he saw my question and wanted to answer it.

He conceded that the death toll he gave Amanpour was low but he based it on the initial report he received, stressing government wanted to release figures “that cannot be doubted.”

I grabbed the opportunity to ask the President a few more questions, which he all answered quite candidly.

I learned that such phone calls to reporters from the President were quite rare, at least when he was already in the middle of his term.

If I’d be made to list down the top 10 coverages I had of the outgoing President, that 2013 phone call would land in the top five.

By the time I covered him as Malacañang reporter, there weren’t any more surprise calls. Instead, there were press conferences, speeches, and events that filled notebooks and my e-mail inbox and tape recorder.

If you’re a reporter after sound bites, Mr. Aquino is not a joy to interview. He likes to explain his answers at length, giving specific examples in the hope of driving home his point and making journalists understand him better. A downside to that is, it can make journalists lose their focus.

Which brings me to another unforgettable coverage: his June 2014 official trip to Japan, where, for some reason, the President had the brilliant idea of leaving Manila in the morning and flying back at night.

He met with Prime Minister Shinzo Abe in Tokyo in the morning then flew to Hiroshima afterwards to keynote an international conference focusing on the Mindanao peace process.

It was here where he also had another unannounced meeting with Moro rebel chieftain Murad Ebrahim to iron out kinks in the peace negotiations.

The tight schedule left a window of an hour and a half for a press conference—onboard the chartered flight from Tokyo to Hiroshima.

Mr. Aquino gave lengthy answers, ignoring the pilot’s request for everybody to take their seats because the flight was preparing to land. I was torn between wanting to listen to the President and sitting down to buckle up.

At one Asean meeting in Brunei in 2013, my first foreign coverage of the President, the Asean leaders’ dinner took longer than usual and Mr. Aquino arrived at almost 11 p.m. for his briefing with the press corps.

I wondered where he got his energy after a long day. He did not look tired at all, while we journalists valiantly tried to fight off our drowsiness.

We asked him about the maritime dispute, and for the first time, I observed Mr. Aquino’s penchant for details and lengthy explanations.

On domestic issues, he would read particular articles or provisions of the Constitution.

Another press conference I will always remember was the one in Langkawi, Malaysia, last year, where President Aquino briefly excused himself to talk to the Indonesian foreign minister as he fought for the life of Mary Jane Velasco.

It was seeing the head of state and chief diplomat in action. For a journalist, that was an exciting moment.

Covering the President also means being quick to pick up non-verbal communication. You will have to understand his facial expressions, mannerisms, gestures and tone of voice, among others, to be able to put a news story in context.

To a certain degree, Palace reporters know when Mr. Aquino is in a good mood—or if he’s pissed. His demeanor can change in an instant, like that of any human being.

His gaze would turn from warm to icy, or his tone would ooze with sarcasm, whenever one asked about Sen. Ferdinand “Bongbong” Marcos Jr. or outgoing Vice President Jejomar Binay.

If these people annoy him, it is the ordinary folk who never fail to bring a genuine smile to the President’s face.

This I saw during the recent election campaign. I didn’t cover Mr. Aquino’s own bid for the presidency in 2010. Before this year’s campaign, my presidential coverage was in controlled environments, where protocol took precedence over everything else.

But I found out during the campaign that President Aquino likes it best when he is with the regular guys.  It’s obvious that this scion of one of the most affluent families in the country is his most natural self with them.

His campaign speeches were unpretentious, and he connected right away with the people with his stories about eating sour pineapples, halo-halo with generous servings, and unripe butong pakwan; his incredulity that the tupig (glutinous rice) is getting smaller; his (at times) worn-out jokes; and of course, his unflagging determination to one day find love.

When he arrived at campaign sorties, people screamed in delight. When he gave his speeches, people listened.

President Aquino inadvertently stole the show from his anointed one, Mar Roxas, and now vice president-elect Leni Robredo, when they filed their certificates of candidacies last year.

He arrived, unannounced, at the steps of the Manila Cathedral with Roxas and Robredo. Their surprised supporters immediately gathered for pictures with the President.

In an open space with an unscreened audience, it was obviously a security nightmare for the Presidential Security Group (PSG). The PSG gave the excited people a few minutes for their selfies with Mr. Aquino before they literally surrounded him.

It is but human to miss the adulation of the people, or perhaps even some of the trappings of the highest office of the land, or the vast power one person can have to change his country and touch the lives of his countrymen.

It is likely that Mr. Aquino will miss all these.

But I saw him step back from them, literally and figuratively, at the presidential campaign kick-off in Iloilo.

Before the yellow confetti rained on Roxas, Robredo, and the administration’s senatorial candidates, I watched Mr. Aquino slowly walk back—alone—to the rear of the stage, content to stay in the background.

This, for me, was the most extraordinary coverage I had of the 15th President of the Republic of the Philippines.

The son of democracy icons and a man whose life is intertwined with the country’s politics and history, Noynoy Aquino has remained unaffected by power.

He will let others shine.