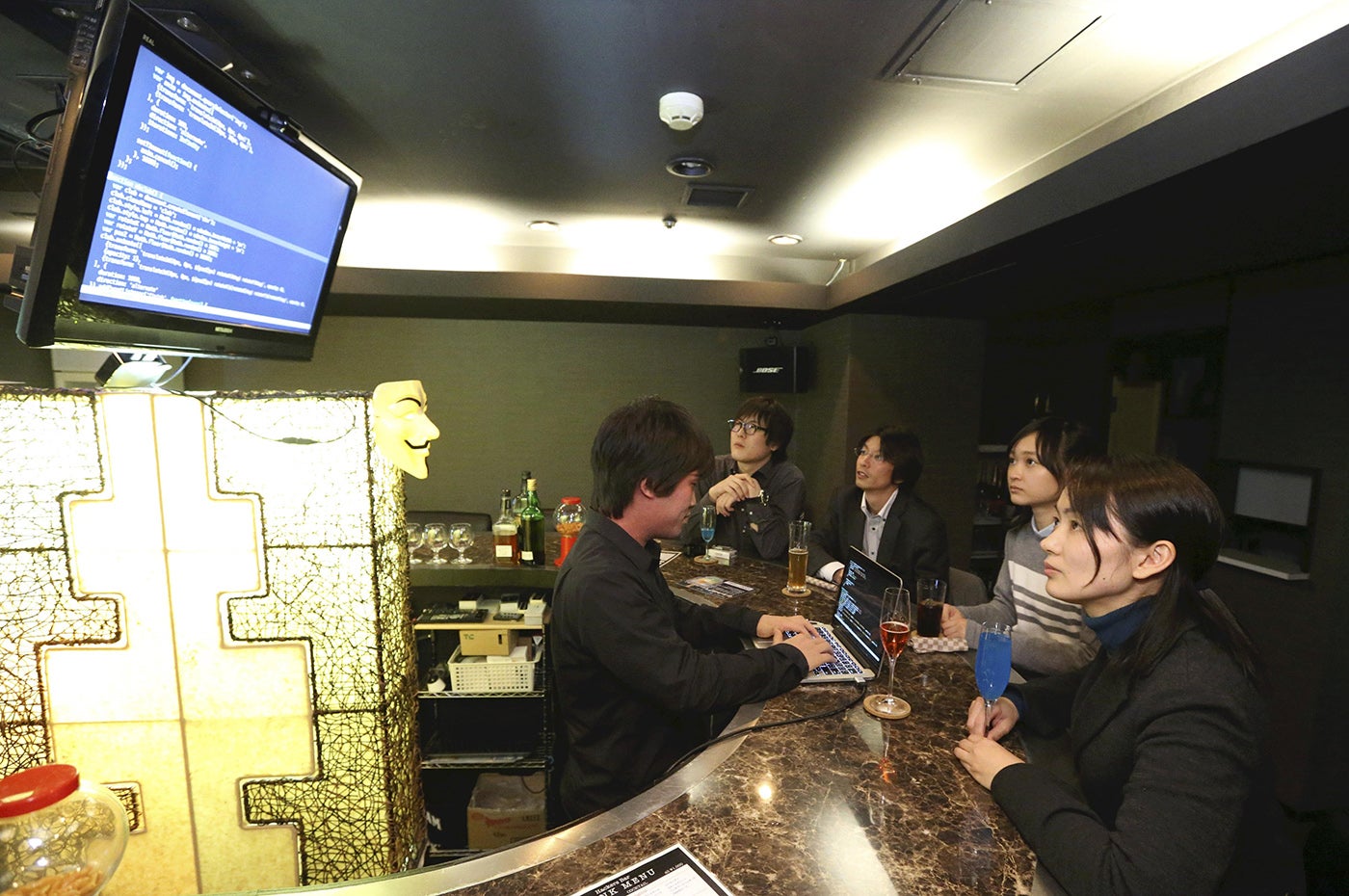 Bars where research scientists, computer programmers, private detectives and other unlikely people work as bartenders appear to be increasingly popular in Tokyo. Curious customers are captivated by the stimulating conversation as well as the drinks. A Yomiuri Shimbun reporter visited some of these bars to experience the atmosphere.

Incubator, which opened two years ago, is on a back street in the Arakicho district of Shinjuku Ward, where a large number of bars and restaurants are concentrated.

The bar’s interior design is inspired by scientific instruments. A DNA amplifier and distiller decorate shelves, while a microscope sits on the counter.

Wine is served in test tubes, sake is poured into beakers and snacks are served on petri dishes.

The owner of the bar is Takashi Nomura, 32, who studied biological science at graduate school and then researched treatment for acute cerebral infarction using ultrasonic waves in a university laboratory.

Nomura and some colleagues had talked about wanting a place where researchers could interact with ordinary people to share scientific ideas. This encouraged him to open the bar.

He named the bar Incubator because he felt it should be “a place for incubating communication.”

At a table inside, Taisuke Kondo, 28, a graduate school student studying immunology, raised a beaker filled with beer for a toast.

“I talked with the owner about ideas for my academic thesis and he listened to my complaints about experiments while I drank,” he said.

The bar also devises ways for customers with academic backgrounds in the humanities to enjoy their visits. It asks these customers to write down questions about science in advance in a notebook provided by the bar, and the entries are used to assist communication with research scientists who frequent the bar. 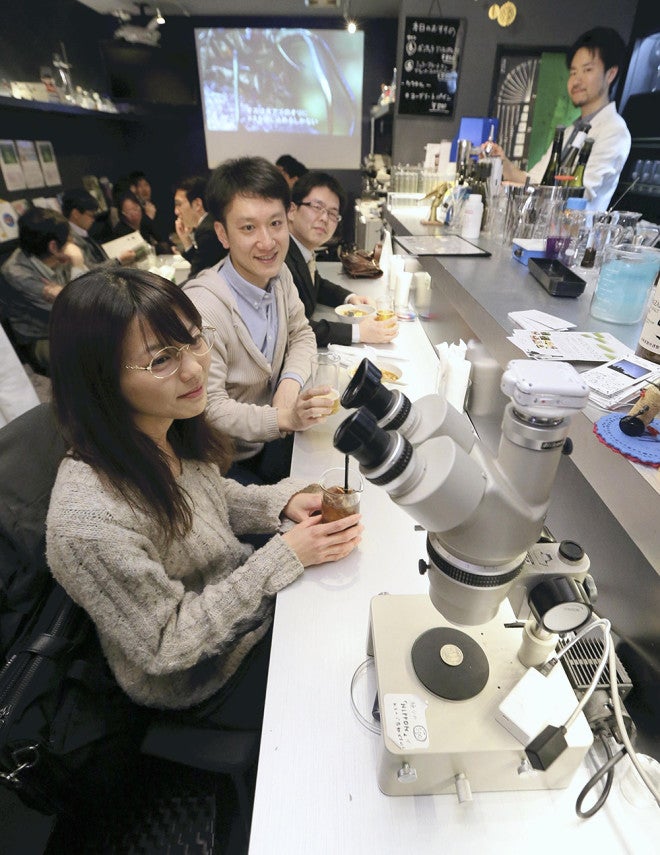 At Hackers Bar in a built-up area in the Roppongi district in Minato Ward, members of staff are computer programmers.

Standing inside a U-shaped counter, they type on computers and codes in English and numbers that are not familiar to ordinary people appear one after another on screens above customers’ heads.

The staff members said the lines of letters and figures are codes that instruct computers to work. Many customers work in fields related to information technology.

The customers happily chat with the staff, saying things like, “What kind of programming languages do you use?” and “That’s a beautiful code, isn’t it?”

The bar was opened two years ago by Akihiro Nakao, a 34-year-old computer programmer. “I wanted a place where programming skills can be demonstrated to others, like street musicians,” he said.

Six staff members are in their 20s and 30s. One of them has worked for a major internet portal site.

They improvise programs to change the lighting inside the bar, for the customers’ enjoyment. They also offer advice to customers about problems with their personal computers or IT businesses.

Hideaki Iio, a 31-year-old graduate school student from Kyoto, received advice about developing software for an application. “It’s different from formal consultations,” he said. “I can talk in a relaxed mood while having a drink. This widens my perspective.”

Detective Cafe Progress is a bar that looks like it could easily appear in a movie. Located in the Ikebukuro district in Toshima Ward, the staff members are private detectives working for a detective agency in Tokyo.

The company opened the bar three years ago with the aim of eradicating the negative images of private detective agencies, such as the business being part of an underground syndicate or that they demand exorbitant fees.

In the bar, a genuine-looking mock report of an infidelity investigation is on the counter, and video reenactments of private detective investigation methods are shown.

Maybe because people are attracted to this mysterious world, 10 to 20 customers a day visit the bar.

Staff members said it is not unusual for customers to begin seeking advice while drinking, saying things like, “By the way, this is about one of my friends …”

Koji Suzuki, 46, the general manager of the bar who has been a private detective for about 15 years, has seen the dark side of society through such work as taking countermeasures against stalking and searching for missing people.

He said: “I can offer advice about many things based on my experiences during my long career. I want customers to feel free to talk to me.”

On the back of a menu is a list of fees in case customers actually ask the detective agency to conduct an investigation.

Behind the counter, Suzuki smiled in an ironic way, saying, “But it’s much better if the list is useless.”

I was recently transferred to a workplace in Tokyo’s Tama area and have not yet been able to find any drinking pals, so I feel a little lonely.

I then remembered a past visit to Niso Bar in the Koenji district in Suginami Ward when I was gathering news. In the bar, Buddhist nuns who had received religious training at temples served cocktails and gave advice to customers.

I came up with an idea to visit the bar for advice about my future as a single woman.