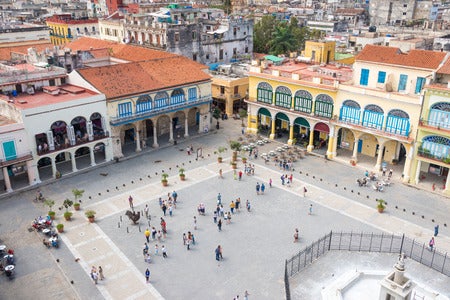 HAVANA — At 65, Ramon Alfonso has seen a lot of history in his native Cuba. But this is the first time he has eaten a vegan salad.

After decades of Communist rule and centuries of eating meat and beans, the island is opening up — and so are its taste buds.

There is not an ounce of pork and rice in sight, but in the searing heat, that suits him just fine.

“I don’t know if I’ll be eating this every day because I’m not used to it,” he says.

“But it is tasty. And it’s better for the health and for the weather in a tropical country like this.”

Under the communist regime, the few diners who could afford to step out for dinner faced dreary state-run eateries with stodgy food and bad service.

Now those state-run restaurants are empty.

The government authorized privately-run restaurants five years ago, and the change was slow to take effect. But with more tourists coming to Cuba in the past year, its impact is clear to see now on the terraces of Havana.

At one state-run joint in Havana’s old quarter, four waiters sit chatting with not a single one of the tables occupied.

A few dozen yards away, the privately-run Cafe de las Letras is crammed with diners munching its trademark moussaka.

With eggplant smothered in meat and cheese, that is a novel dish for Cubans who were used to eating the vegetable fried in breadcrumbs.

At another of Havana’s new wave of trendy restaurants, Versus 1900, the smell of rosemary fills the kitchen.

Chef Alain Prieto is seasoning mutton in a Peruvian-inspired fusion creation. Beside him a colleague is cooking crispy vegetable tempura.

“International dishes have been added to the traditional creole cuisine,” Prieto says.

“People are starting to eat differently,” he adds. “More refined.”

In a kitchen workshop run by the country’s Culinary Federation, its president Eddy Fernandez chucks a spot of oil in the pan and adds peppers, onion and garlic.

The shredded beef is pre-cooked and goes into the pan to sizzle briefly.

A splash of white wine and it is ready: his modern take on the Cuban classic vaca frita, or “fried cow.”

Fernandez is helping train a new generation of Cuban chefs.

Demand for their services has surged in the past two years, he says, and standards have risen.

The health ministry says 45 percent of adults in Cuba are overweight and 12 percent suffer full obesity.

Chefs are wanted who can cook classic Cuban dishes but “with less fat and sugar, little salt and more fruit and vegetables,” Fernandez says.

– Outside influence -When Italian chef Annalisa Gallina arrived in Cuba three years ago, she says, salad was something stuck on the side of the plate as a decoration.

The country’s cooking was still emerging from the economic crisis that followed the collapse of its ally, the Soviet Union.

That crisis limited eating options in a country that imports most of its ingredients.

For many Cubans, “if it doesn’t have rice, beans and meat, it isn’t food,” says Gallina, 37, who works at Cafe Bohemia.

“The Cubans who are most open to vegetarian cooking are the ones who have had the chance to travel abroad.”

President Raul Castro took over from his brother Fidel, leader of the 1959 revolution, in 2008.

He has loosened travel restrictions for Cubans.

The government’s migration department says hundreds of thousands of Cubans have traveled abroad since 2013.

Castro has also authorized some private businesses and has transferred state eateries to private hands.

“That is a good thing,” says Fernandez. “State gastronomy was not working.”

The new generation of restaurateurs faces the challenge of pleasing the four million tourists now coming to Cuba every year — including a growing number of US visitors.

In the kitchen at Versus 1900, Prieto and colleague Omar Gil show off their organic goods: cherry tomatoes, raisins and strawberries.

They have grown the ingredients in their own garden.

“There is lots of produce to make the most of in Cuba,” says Gallina at Cafe Bohemia.

Cubans are used to fruit juice, but not like the exotic mixes she serves: guava with pepper and basil, carrot with ginger or pineapple with mint.

“You sit down in a park with wifi and download a recipe. That is how we have learned,” says Prieto.

“We want to go on like that and improve Cuban cooking.”