And the dish ran away with the spoon | Lifestyle.INQ ❮ ❯ 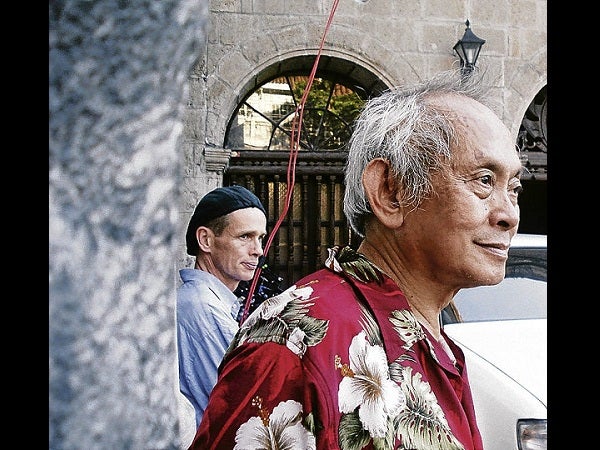 And the dish ran away with the spoon 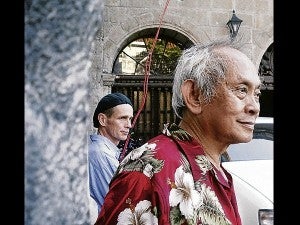 I learned from Igan D’Bayan’s column in The Star that the great David Medalla was in town. It brought me back to the Ermita days of the ’50s, when some rubble still remained from the bombing of the Ermita-Malate area during the Liberation.

David had put up a barong-barong in the bowels of a gutted building and proclaimed it “Le Cave des Angelis”—a café. It was probably Manila’s first poetry reading venue and attracted everyone with some literary k or pretension of.

Medalla is now 69(?) years old. But his picture showed him still a pixie, either deathless or a Dracula. He was, and still is, a star, celebrity-oriented, erudite, personable, a creative artist beyond compare and his own best PR.

By coincidence, a week ago, an old notebook surfaced from the debris in my bodega. In it was something I had written on a David happening 50 or so years ago. I thought I would share it with artists and writers of my generation who still remain standing.

David Medalla, poet, painter and performance artist, 17 years old in 1957, was Ermita’s boy genius and proto-hippie, having just made a name with his Bubble Machine in London. His “Le Cave des Angelis,” a barong-barongin the shell of a bombed-out building on A. Mabini, had become a café without serving a drop of coffee. He read poems by Baudelaire, Rimbaud and other French decadents, and had a cult following of writers, artists and sophisticates who sat on the lumpy cushions, enduring the heat and the bedbugs.

Once David gave a party for Jun Lansang (descendant of Communist leader Jose Lava) who had won a Palanca poetry award. Jun was emotionally unstable, but everyone loved him. The party was like a Mad Hatter’s, only loonier. Twelve places with red goblets were set on a long table. It would have been a nice party except that 21 people showed up.

On the other side were Jolico Cuadra (who looked like Marlon Brando) and his wife, painter Joan Edades, her face hidden behind a waterfall of hair. There were Lily Amansec (fictionist), Leony Benesa (poet-critic who looked like a debauched Jesus Christ), Larry Francia (poet-painter) and me.

David stood at the door, swilling a Coca-Cola, resplendent in his bright yellow batik wraparound skirt, antique Indian bracelets and many rings. Beside him was Scott Dugger, a blond one-man fan club David had dragged home from England. Every time a new guest (invited or uninvited) arrived, the chairs had to be rearranged and our soups moved, and this went on throughout the dinner. More guests kept coming in and at one time there was a mix-up of soups. I was sure mine was with Larry.

Jun Lansang and David Medalla were utterly convinced that it was “the most impressive, most cultured” party in the universe. There was a lot of to-do about “recording everything for posterity.” A sheet of pad paper went around on which to sign our names, and two photographers for whom we had to pose several times.

There was a movie camera, too and, would you believe, a tape recorder to preserve all our silly talk. David said, “My goodness, if someone put a bomb under this table, it would be the end of arts and letters,” and after a few drinks we almost believed it.

“It is the party of the decade,” Jun Lansang kept repeating with the accent on the last syllable of “decade.” I thought he was saying “decayed” so I asked him to spell it. The tape recorder kept going and nobody said anything bright.

The meal was excellent—strictly vegetarian, David and his friend Scott Dugger ate no flesh. Each dish was named after some important writer, such as “Garcia Villa consommé” and “Omelette a la Nick Joaquin,” as were the dish of fresh Chinese mushrooms sautéd in sesame oil, the tofu curry and the yogurt dessert.

The hired waiter put a spoonful of “omelette” on David’s plate and David said, indicating Jun Lansang, “Why don’t you serve our honoree first?” It seemed the waiter had taken David, with his long hair and bracelets and skirt, for a girl, and said haughtily, “Because we always serve the ladies first.”

Before we could put another spoonful into our mouths, however, we had to say a prayer with palms up for the movie camera. More people were coming in and I wondered how Maring Llamado, the patroness of the dinner, would cope with having to multiply the mushrooms and the tofu.

Everyone seemed to have come just to watch and put it upon the next fellow to say something important. Finally, Jose Garcia Villa arrived (alas, there was no more dinner left!) and everyone’s hopes rose high. But all the great Villa could say was, “Why are you all cackling with hen voices, no one has a baritone like me!” Which was hardly earthshaking, and though we listened hard, there was nothing more.

Nena Manalo and I started talking about our caesareans. Joy Dayrit whispered that she would be afraid to go out with someone like Jun because he was “obviously a Red.” Lily Amansec announced that she was selling cemetery lots and David agreed to buy one on condition that he be allowed to build a barong-barong on it.

Eventually Jun was persuaded to recite his winning poem. Midway he forgot his lines and floundered, in near panic, his eyes moist with tears. And Larry Francia, always a savior of the occasion, said, “It’s all right, Jun, nobody memorizes his own poems.”

And everybody had a kind word for Jun. And if only people who are confused, or depressed or have lost a button realize how many people love them, they would have a brighter outlook.

David Medalla recited his own poem mellifluously, in a silky voice, and there was a lot of French in it. This made Jun even sadder and he kept blowing into his dinner napkin all throughout the dinner. Joan Edades finished her dessert and promptly fell asleep in her chair, snoring softly through the brandy and a discussion on Rimbaud.