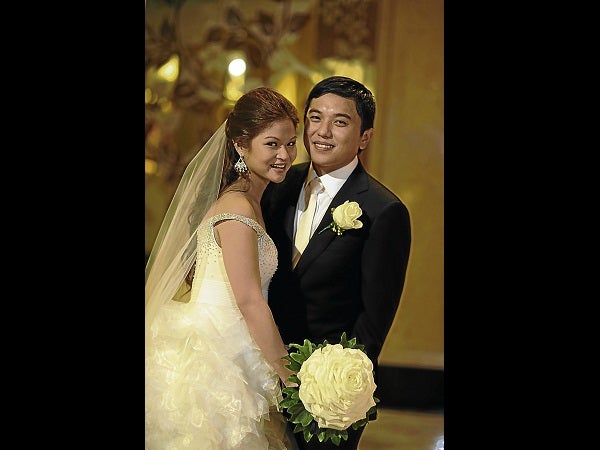 A princess weds her prince

You’ll never have to be alone

I love you and that’s all I really know

I talked to your dad, go pick out a white dress.

In many fairy tales, the princess is always rescued by her prince after both undergo a series of obstacles meant to test the course of their love.

But for Princess Violago, the lovely and vivacious youngest daughter of Oscar and Bootsie Violago, the course of true love led her clear and straight to the arms of her prince, Patrick Dee.

A few frogs may have been kissed along the way, but Princess knew the real thing when she met Patrick through a mutual friend. Also the youngest in the family, Patrick, son of Donald and Alegria Dee, had no inkling about what fate had in store for him, but he knew there was

something special about Princess.

Their destiny led to a walk down the aisle last July 30 in a simple ceremony held at the beautiful Santo Niño de Violago Church in Quezon City.

Wedding guests broke into spontaneous applause as the curtains parted to reveal Princess being escorted down the aisle by her father. Looking every inch like a princess in a white multilayer, off-the-shoulder wedding gown created by Paul Cabral, the bride smiled teary-eyed as she took the arm of her groom. And many had to wipe their own tears as Princess lovingly kissed her parents before going up the altar.

A “just married” sign on their white Rolls Royce wedding car awaited the couple as they left to go to their reception dinner. Red at Shangri-La Makati was transformed by event stylist Jing Tañada to reflect the evening’s theme of chandelier and crystals. Brother of the bride, Anthony “AJ” Violago, made sure everything was in perfect order, from the towering floral creations on the guests’ tables to choosing the right wines for the dinner. 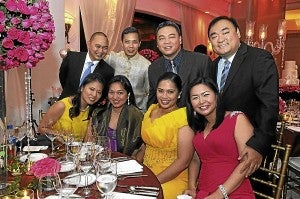 Dinner was a fine dining feast, starting off with foie gras ballontine with apple vanilla puree, followed by lobster bisque with corn froth and shellfish toast. The first course was a light and flavorful Chilean seabass in miso foam, followed by fresh strawberry sorbet.

The main course was worth waiting for as guests were served fillet mignon in truffle jus sauce and fondant potatoes. Dessert was a definite treat of a chocolate trio of mille fuille with banana ice cream and three scoops of Häagen-Dazs supreme flavors.

The evening’s program was short and sweet as the bride and groom’s siblings and some very close friends wished them well, and both Donald Dee and Oscar Violago gave the kind of message that only fathers can give—that is, “we will always be there for you.”

But what had all the guests clapping and enjoying themselves to the max was the impromptu song numbers performed by none other than the bride’s mother, Bootsie, and sister, Malou Violago Tanjutco. To the further delight of the guests, the couple later on joined in to sing their favorite song. This joyous celebration among family and friends was capped off by a round of dancing to the band Real Groove.

As for Princess and Patrick, we all wish them the happily ever after they so richly deserve!