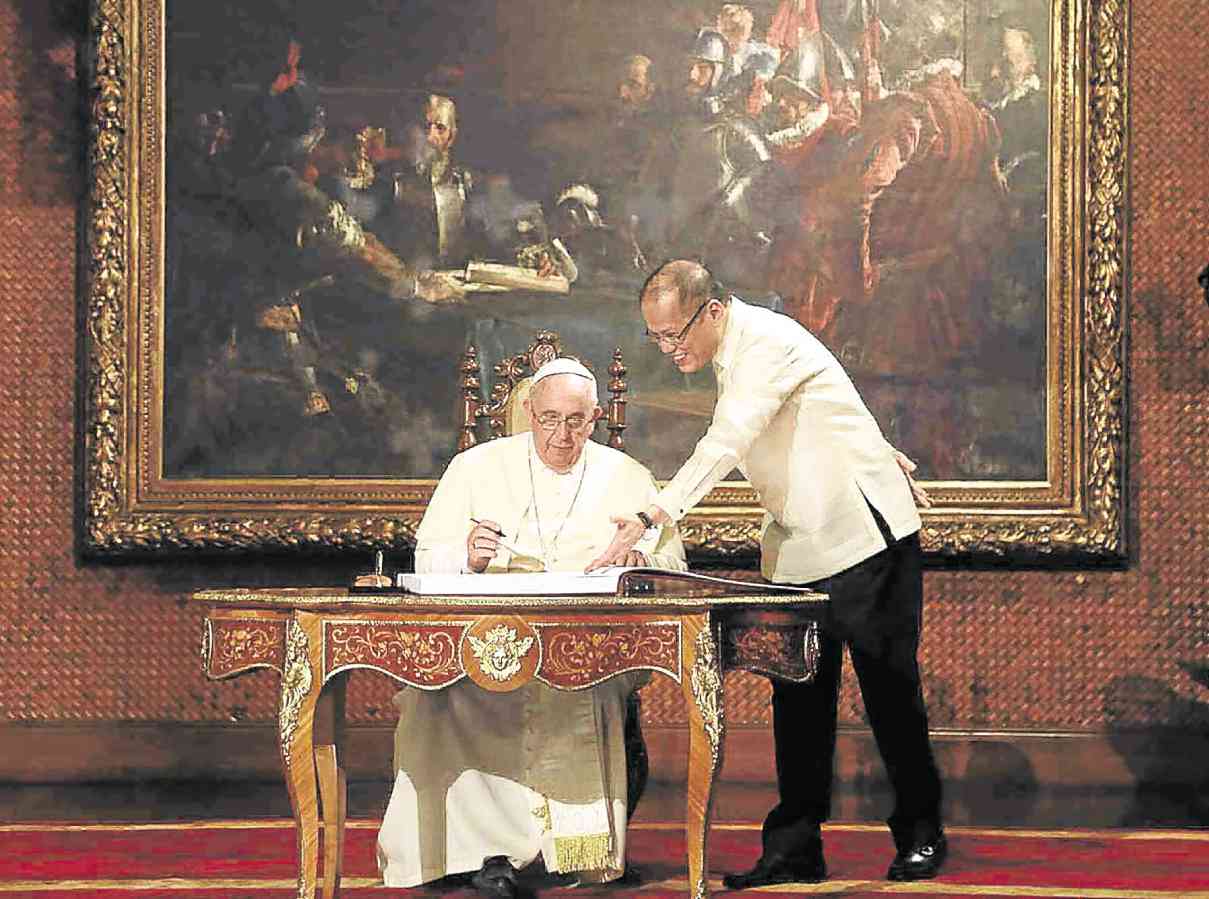 PRESIDENT Aquino assists Pope Francis during the signing of the Palace guest book, with Juan Luna’s 1886 canvas of the “Blood Compact” as backdrop.

When President-elect Rodrigo Duterte is sworn in on Thursday and outgoing President Aquino is given departure honors at Malacañang, the people will get yet another fleeting glimpse of the Palace that has stood as silent witness through the centuries to the transitions of leadership in Philippine history.

While people in general could only dream of seeing Malacañang, there have actually been more and more Filipinos who have set foot in it the past years.

To martial law “babies” who grew up during the regime, it feels almost surreal today to actually be able to drive down JP Laurel Street and dine at the Casa Roces restaurant across the Palace, or hold office in one of the many private offices in the vicinity.

The feeling of disbelief comes from the Filipino’s contemporary orientation—in the ’70s and ’80s the Palace and its vicinity were off-limits to the public. One simply didn’t go there or even catch a near glimpse of it.

During the martial law era, one could only imagine its grandeur and stateliness, and the opulent and exclusive parties that went on behind its walls. Malacañang was almost a mythical destination, where only the gods went.

However, that changed after the 1986 People Power revolt. Malacañang has been relatively accessible since then, and it underwent yet again many changes thereafter, mainly in the reuse and repurposing of its many rooms.

The irony is not lost on the people: President Aquino holds office in what used to be called the Marcos Room—the bedroom of strongman Ferdinand Marcos. It offers a beautiful view of the Pasig River and the Malacañang Park.

Now called the Presidential Study, it was where Mr. Aquino moved in shortly after he assumed the presidency, not right after, and when his original choice of office, the Bonifacio Hall (more popularly known as the Guest House), had to undergo structural renovation.

Tomorrow, if initial plans are followed, Duterte will arrive at Malacañang at the Family Entrance, which is what the side entrance is called, which Mr. Aquino takes daily when he goes to office.

This is to differentiate it from the State Entrance, which leads to the iconic grand stairway of the Palace.

As reported earlier, following tradition, the President takes the State Entrance only after he’s been sworn in.

Mr. Aquino will then meet his successor at the President’s Hall, where they will have a brief conversation.

After the departure honors for Mr. Aquino and after he is seen off by the incoming president, the latter will go back to the Palace, walk down the stately Reception Hall and on to the Rizal Ceremonial Hall where he will take his oath of office.

This is the first time since 1986 that a presidential inauguration is being held at Malacañang. In February 1986, Marcos was sworn in at the Ceremonial Hall.

No doubt, the Palace and its many historic rooms will be in the limelight tomorrow, and will again draw the curiosity of the people to their history, symbolism, even their craftsmanship and design.

Keeping us engrossed over the weekend was a highly informative, lovely coffee-table book published in 2014, “in celebration of the Palace’s sesquicentennial anniversary as official residence of the Chief Executive of the Philippines.”

Quezon is the Undersecretary and Officer-in-Charge of the Presidential Communications Development and Strategic Planning. Barns is the director of the National Museum. Alcazaren is a noted urban planner.

The book takes us through the history of the Palace, its metamorphoses through the centuries (complete with floor plans), the leaders who held office or lived there (starting with the Spanish governor-generals) and the historic figures and heads of state who had come to visit.

But what would keep you glued to the book are the photographs of its stately rooms and architecture details.

A friend once told us that Malacañang, given its colonial past and intricate and resplendent woodwork, had greater eye-popping grandeur than the White House. Never having gone to the White House, we’re not in a position to agree or disagree, but yes, the sight of Malacañang Palace could overwhelm you the instant your car runs around its driveway and your eyes sweep up the vast garden, with the 1937 Art Deco fountain sculpture of women looming at the center and the centuries-old giant tree standing guard like a sentinel across from the State Entrance.

Vehicles stop right in front of this giant tree to unload their important passengers at the State Entrance.

In urban lore, this tree has been referred to as the dwelling place of “Mr. Brown,” the “kapre” (elemental) that’s believed to have inhabited it through time and has been named such because, well, tales have it that that was his color.

The lore doesn’t quite have the wide demographic appeal of the “White Lady of Balete Drive,” but give it more time and more visitors to the Palace. If only “Mr. Brown” and the tree could talk, their memories must read like a VIP almanac.

Malacañang is grand, stately, elegant and has the beguiling mix of the colonial West and the exotic East. Its architecture and décor have been the metamorphoses of the extravagance, sense of pomp and imperial grandeur of its past occupants, but also of their need for functionality and their mandate to heed and serve the popular will.

In the book’s introduction, the authors put it succinctly: “Malacañan Palace is both office and residence of the President of the Philippines; and the dual aspect of this complex—the bureaucratic and the personal—is reflected in the various buildings in the complex, and their uses over the years.

“But taken as a whole, Malacañan Palace revolves around power: wielding it, defending it, and seizing it.

Here are parts of the Palace that might be highlighted in tomorrow’s coverage of the inaugural—we use the coffee-table book as reference for their background and description:

The State Entrance. The first thing you see as you walk past the security procedure is the grand staircase flanked with beautiful floral arrangements. Half visible behind the flowers are the colored fiberglass doors installed in 1979, according to the book, to replace the stained-glass doors installed in the Commonwealth period. The fiberglass portrays the native myth of Malakas at Maganda, which Ferdinand and Imelda Marcos were said to channel during their reign.

The grand staircase showcases the wood craftsmanship of the Filipino—according to the book, the sawali weave pattern produced by a mosaic of innumerable chips of wood glued together.

During official functions, such as state dinners and socials, the grand staircase is decked with floral arrangements that showcase Filipino culture and indigenous resources—the guests’ first visual encounter with the Philippines.

In the Aquino administration, the staircase usually displayed sampaguita garlands or native orchids in ingenious and tasteful arrangements.

Emerging at the top of the stairway, one sees the vestibule displaying the murals of National Artist Carlos “Botong” Francisco —the “Muslim Dance” and the “Fiesta Scene,” with Francisco’s unfinished “Blood Compact” in the middle.

The Foyer. At the top of the stairway, the first thing the guest sees is the image of Lapu Lapu standing over a slain Magellan—a stained resin door leading to the Residence.

On wall beside it is Juan Luna’s 1886 canvas of the “Blood Compact.” It is against this backdrop that visiting heads of state sign the Palace guest book—in Aquino’s term, from US President Barack Obama to Pope Francis.

According to the book, the chandeliers date back to the Commonwealth era, and in 1979, in the Marcos era, balconies overlooking the hall were added, referred to as the “minstrel galleries,” with their own Venetian chandeliers.

The carpet has the presidential coat of arms, the book says, which was patterned after the Aubusson carpet from “the Quirino refurbishment and was woven by Filipino craftsmen in 2003.”

The hall is lined with portraits of the 15 presidents of the Philippines, done by different portraitists of each administration.

Rizal Ceremonial Hall. It is the largest room in the Palace.

The book says: “The Rizal Ceremonial Hall, with its three massive carved wooden chandeliers and coconut-wood and native hardwood veneers and paneling, remains the supreme expression of New Society aesthetics. It replaced the Ceremonial Room dating to the Commonwealth, and the verandas and balcony of Spanish, American, and Third Republic days. Known from 1979 onwards as the Ceremonial Hall, it was named after Dr. Jose Rizal, by presidential proclamation in 2003, by way of homage to the national hero, and as a fitting name for the hall in which many of the most public and important ceremonies of state are conducted…”

President’s Hall. Where Mr. Aquino and Duterte are set to meet, this used to be the living and recreation room of the Private Quarters, added in the 1978-1979 renovations.

Malacañang has a rich history that goes back to 1863, when the Spanish governors-general used it as a country retreat.

(Malacañang, with a “g,” has become the popular usage.)

The book details the outgoing resident’s perspective about the Palace. It says: “President Aquino’s attitude toward the Palace can be described as one of utility: a place primarily for work, and the bare essentials of ceremony and protocol; a place of studiousness and calm, and conservation rather than embellishment for the Palace and its structures as well…”

Of course, it must have ghosts. Ghost stories lend flavor to design and spice to history.

While the place in itself doesn’t feel eerie, especially when it’s bustling during a state function, it can get creepy, according to some Palace staff, when the place is all dark.

The ghostly presence was usually felt, late into the night, by workers rushing the physical arrangements, like putting up décor, for functions the next day.

One time, a few staffers got so spooked when, after working late, the lights had been turned off and they couldn’t find the switch so that they had to grope their way down the stairs in the dark. They felt it mysterious how they had lost their way and had to shout for the guards to find them and escort them out.

Sometimes the staff would hear knocking on the door and find nobody outside.

One night, working overtime, a staffer stayed behind in the office, working at her computer. She was alone but inexplicably she felt as if someone was looking over her shoulder. There was no one.

On an impulse, she clicked the camera of her laptop, like one would when taking a selfie.

When she looked at the photo she had taken, there was her image, sure enough, but behind her was a faint image of a skull. She shut her computer and rushed out the office.

Mr. Aquino, it is said, had this habit of turning off the last lights in the office, for inevitably he was always the last to leave (with a few of his remaining staff). Apparently, he wasn’t afraid of the dark, and he’s not scared of ghosts.

While the grandeur of Malacañang is timeless, the events that take place in it and the people who inhabit it are temporal.

Only the ghosts remain.