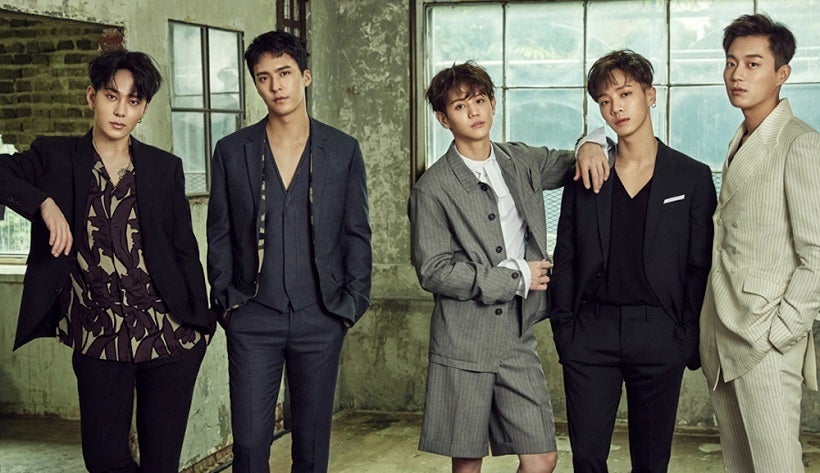 The music video of the carrier, “Ribbon,” was released at 12:01 today (July 4), and many Beast fans and close observers were shocked to find a mid-tempo melancholic ballad that goes against the grain of most K-pop comebacks usually anchored on catchy dance tunes.

But the early verdict is that Beast has come up with a moving song that will consolidate its reputation as the most consistent K-pop act with the best discography, even better than bigger but otherwise overrated bands from bigger, richer entertainment agencies.

At the least, “Ribbon” is set to take its place in a discography distinguished by Beast’s signature theme—heartbreak and loss.

The melancholic turn has been prefigured last week with the release of the even sadder “Butterfly.”

But if it’s any indication how fans take to Beast ballads, the music video and “prerelease” got one million hits in less than a day on Youtube.

Beast’s comeback has been highly anticipated since Cube, the agency that manages Beast, made the shocking announcement last April that lead singer Jang Hyunseung was leaving and that Beast would continue as a five-member band.

One of K-pop’s biggest acts with a global fan base reaching Europe, the Americas, and even Asia Minor and Central Asia, Beast debuted as a sextet in 2009 with the hit “Bad Girl.”

It went on to become one of the most defining acts of K-pop, making hit records and stylish music videos such as “Breath,” “Shock,” “Fiction,” “Beautiful Night,” “Shadow,” “Good Luck” and “Yey.”

But last year with “Yey,” Beast started to be rocked with rumors because of Jang’s remoteness from the rest of the members who had built a steady reputation for their chemistry, closeness, and hard work.

Last January, Jang missed a concert in Macau. Much later he fell asleep while the group was being interviewed on Japanese television.

Last March 19, Jang was missing in the “fan meeting” and mini-concert at Araneta, Beast’s return to the Philippines since 2010.

The departure of Jang has dimmed the future of Beast. After all, he was lead singer and one of its most popular members.

Jang came to Beast after being eliminated as the sixth member of the more senior group Big Bang, perhaps the most dominant K-pop male act today against whom Beast is often pitted.

In 2011, Cube made him one-half of the celebrated Troublemaker duo with sex goddess Kim Hyuna of the girl act 4Minute (the same girl who partnered with Psy in the global viral hit “Gangnam Style). Last year, he released his first solo record “Ma First.”

Although Yang Yoseob remains “main vocalist,” Beast’s renown as arguably the best-sounding K-pop act owes to the vocal dynamics between him and Jang, as shown for example in such vocally demanding pieces as “12:30,” “Sad Movie,” “More than You Think” and “Saigono Hitokoto.”

demanding mini-album (it has had nine so far, all of them brilliant).

It has, thus, come as a surprise that “Highlight” is a full album, in itself a sign of confidence and perhaps, of grim determination, to erase the stigma of Jang’s departure and display its resolve to move on.

Songs in the new album are written and produced by the Good Life team of Beast rapper Yong Junhyung and his friend, Kim Taejoo.

But again as if to display Beast’s determination to move on, Good Life is sharing writing credits with the rest of Beast— vocalist Yang, leader Yoon Dojoon, actor-singer Lee Kikwang (perhaps the most popular member), and youngest member Son Dongwoon (who stayed for a year in the Philippines to learn English).

“Highlight” therefore is a collaborative work and exhibits all the hallmarks Beast has been known for—the members’ perfect chemistry and hard work. “Highlight” may yet become the highlight of Beast’s sterling record as the best K-pop act.