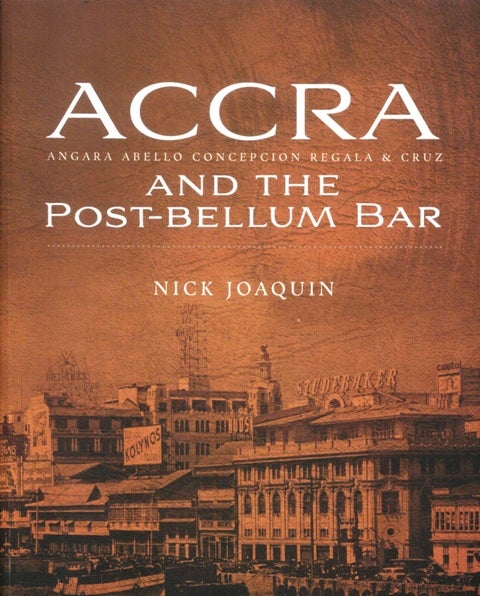 THE COVER of "ACCRA and the Post-bellum Bar"

One of Nick Joaquin’s last commissioned works is on ‘ACCRA’

INSTITUTIONAL memory” may mean another thing altogether (the knowledge shared by a group of people) but it also easily hints at another possible meaning: the importance of an institution in a people’s history. This made-up meaning can refer to the need for books chronicling the story of companies that play a crucial part in the story of the Filipino people.

The law firm Angara Abello Concepcion Regala & Cruz Law Offices (ACCRA) is one of the most influential law firms in Philippine history. Now comes the opportunity to know more about where they came from. It begins as the story of five lawyer friends: Edgardo J. Angara, Manuel A. Abello, José C. Concepcion, Avelino V. Cruz and Teodoro A. Regala. “ACCRA and the Post-Bellum Bar” by Nick Joaquin, edited and with additional text by Teodoro L. Locsin Jr. (ACCRALAW, Taguig, 2015, 327 pages) has a fascinating origin story of its own. Commissioned by Angara, an ACCRA history has long been in the making, with National Artist for Literature Joaquin hard at work at it. But when Joaquin passed away in 2004, the book was left unfinished. Joaquin’s nephew, the writer Tony Joaquin, worked on it until he became ill. Ultimately, the fiery, respected journalist (and notable one-time ACCRA recruit) Locsin was brought in to put it all together and properly finish the project.

The resulting product, “ACCRA and the Post-Bellum Bar,” is the fine product of these combined efforts. All of it is in service of the narrative, about how in November 1971, Angara gathered his four friends and built the firm they dreamt of.

“Angara was the forest lad with a political background; Joe Con was frontier South; Manny Abello cosmopolitan Manila like Teddy Regala, both raised in the urbane world of international diplomacy; Ave Cruz was suburban. Soul brothers in law, they were in other respects alien spirits, each having a dissident, counter passion… If so, what explained ACCRA? Why did it seem to such kindred yet disparate souls so imperative a dream?”

“ACCRA” follows the firm’s growth from those challenging early days to its time of prominence, identifying the many lawyers who would be invaluable in the construction of this legacy, all through the Marcos years and beyond, all the way to the firm it is today. “ACCRA” tells the story through their words as well.

Equipped with photographs through the decades, the book zeroes in on the things that made ACCRA different, and what made it great: “ACCRA became known for its litigation prowess; marked less by pyrotechnics in the courtroom as by preparation, patience, persistence and always and ever, substance. Cases will be appealed, and in the court of last resort, it is not how you argued in the court below but what you established and put on the record there that will decide the matter, all things being equal.”

All this is told amid the background of how the Philippine bar emerged into its own after World War II, about how firms run by Americans were taken over by the Filipino lawyers and how the bar became truly Filipino, something ACCRA played a big part in. This is an ambitious effort. There’s even a particularly fascinating part late in the book that speaks about the future of lawyering in the Philippines: “Today’s abogado is Mr. Information Technology; tomorrow’s attorney will be Push Button, Esquire.”

“ACCRA” is a sizable book telling a sizable story—the narrative is dense but, expectedly, extremely well researched and written beautifully. This is how you make a corporate biography, tie it into the bigger picture and write the heck out of it. Everyday readers will find the prose transcendent, but those with even the slightest interest with the practice of law in the Philippines will find “ACCRA” enthralling. It’s certainly a must-read for aspiring and established lawyers.

One of the last works of a late National Artist who was also our greatest writer in English, “ACCRA and the Post-Bellum Bar” may be the story of one law firm, but it is about much more than that.

The book, in the end, is about something more elemental, as Teddy Locsin Jr. adroitly points out in his Foreword: “This is not a book of self-congratulation; it is a plain story that is in places baroque in exposition for that was Joaquin’s way with narrative. But it is a story with which every lawyer and law firm can identify and where clients of any firm will find something useful to know about the practice.”