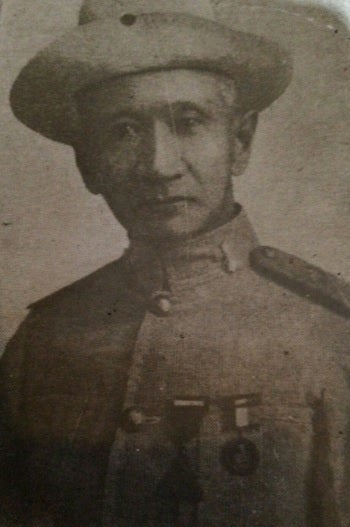 CANON as a revolutionary. PHOTOS COURTESY OF MA. TERESA GARCIA

AS THE University of the Philippines College of Music prepares for its centenary this year, it has started to identify and acknowledge people who made a difference and are instrumental in its formation and existence.

One of the notable persons is the largely unknown revolutionary general Fernando Canon, a classical guitarist, poet, engineer, scientist, who became the first secretary of what was then UP Conservatory of Music.

Born on Aug. 6, 1860, in Biñan, Laguna, Canon was José Rizal’s childhood friend and rival, according to his granddaughter Ma. Teresa Canon Garcia.

“Rizal has letters to him addressing him as his childhood friend and rival,” she said in an informal interview initiated by UP Music dean José Buenconsejo.

Garcia added Rizal was the one who encouraged Canon to play the guitar.

At an early age, Canon’s family moved out of Biñan and transferred to Cabildo Street in Intramuros because of the tulisanes. He studied at Ateneo Municipal de Manila and, as an illustrado, moved to Spain where he finished a degree in engineering.

It was also in Spain where he met the first of his three wives.

“The reason he went back to the Philippines is the death of Rizal, that’s why he joined the revolution,” said Garcia.

Canon became a member of the Malolos Congress and the director general of public works during the revolutionary government, the first Filipino international chess champion in 1905, a teacher at Liceo de Manila and the School of Engineering and Architecture in 1908, and the first secretary of the UP Conservatory of Music in 1916.

He also occupied positions in the National Library and the Bureau of Public Works during the American period.

A talented guitar player, he sought the preservation of traditional Philippine music and musical instruments such as the kumintang, kudyapi, kundiman and balitaw. He’s also said to have written an article on kudyapi.

Garcia explained that as a scientist, her grandfather invented a radiant vitalizer for paralyzed persons, soap for lepers, a cane that doubled as a stun gun.

She said she had copyrighted some of these works.

Because of his various inventions, he was recognized by newspapers and medical journals in Spain and France.

Canon was also a vibrant poet and, according to Garcia, he composed a lullaby and even submitted an entry for the Philippine national anthem.

Canon made contributions to La Solidaridad. He also wrote in for it under the pen name “Kuitib.”

Garcia said Canon, who was still in Spain then, introduced the printer, binder, and donated money for the La Solidaridad’s publication.

“My grandfather and grandmother were the ones who first brought La Solidaridad to the Philippines,” said Garcia. She added that the copies were not detected by Spanish authorities because they looked like bank ledgers sent by her Spanish great grandfather to her grandmother (Canon’s first wife).

“Even up to the end when my grandfather was already very old, he was … a revolutionary,” she said.

Garcia said Canon, who died in 1938, did not like politicking and that he wrote a manifesto written against rogue politicians.

Meanwhile, Buenconsejo said Canon was a very important personality because of his dedication to public service.

“His spirit was to really serve the Filipino people,” he said. “He was involved in many kinds of projects that are very crucial in the development of the nation.”