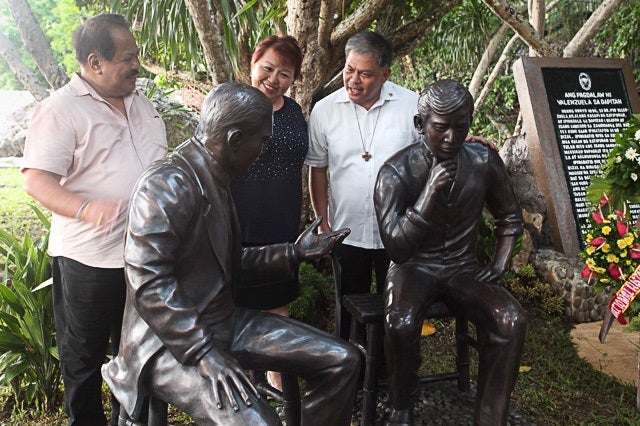 The event, organized by the National Historical Commission of the Philippines (NHCP), also saw the inauguration of the modernized Museo ni José Rizal. Its four galleries feature artifacts and interactive exhibits that relive the four long years when Rizal was banished to Dapitan from July 17, 1892, to July 31, 1896. They include his medical and scientific pursuits, his writings and works of art, his memories of Dapitan, and a hologram showing him talking about his last thoughts as he treks the road to martyrdom.

Also present were organizations dedicated to the promotion of Rizal’s ideals such as Knights of Rizal, Kababaihang Rizalista, Kabataang Pangarap ni Rizal and Kingdom of God Inc., whose members live in a community atop the hill of the Rizal Shrine.

Gabriel Cad, who started as a shrine guide in 1989 and became the shrine curator in 1992, showed what to him were the most valuable pieces in the museum—the original medical instruments used by Rizal in operating the cataracts of his mother, Teodora Alonzo, and many other patients from far and wide.

The museum also proudly displays the original pajamas and set of clothes the multi-faceted destierro used. Cad affectionately stroked the original table and blackboard which Rizal had used in teaching his pupils at Casa Cuadrada, where his classroom, vocational workshop and dormitory were located.

“This is the first time we are showing in the museum the Talisay waterworks system, also known as Linao Aqueduct, which Rizal surveyed and helped build with the blueprint he made,” said Cad.

Rizal harnessed the Linao Creek for its natural spring which gave the public a potable-water system. He much later connected pipes to the aqueduct and with his students built the pipe works that served his household and farm needs.

Rizal had spent a sizable amount for the project, the money coming from a patient whom he operated on successfully. The lamps used local coconut oil. “The system was a cooperative undertaking by the community,” wrote Rizal. “Every light post was taken care of, replenished with oil, turned on and off by the household near the lamppost.”

Occupying a prominent spot in the museum are four sets of Haec Est Sibylla Cumana, a book of oracle or “spin-the-top-and-learn-your-future” game created by Rizal in Dapitan. The book was a family heirloom and was made public only in 2011 upon publication by Cruz Publishing for the 150th birth anniversary of the National Hero. This author saw a group of students playing the oracle and giggling at the answers they received.

In the publisher’s note, Rizal heir Carmen Guerrero Nakpil says Sibylla Cumana is “a panorama of Filipino thought, customs, interests and practices at the end of 19th-century Filipinas. They are also mostly irreverent, risqué and downright funny, a revelation of Rizal’s unfailing sense of humor.”

The Museo ni José Rizal is located at the very site where Rizal spent four years in exile.

In his letter to his best friend, Austrian scholar and professor Ferdinand Blumentritt, Rizal wrote: “From my house, I hear the murmur of a crystal clear brook which comes from the high rocks. I see the seashore where I keep two boats, which are called barotos here. I have many fruit trees, such as mangoes, lanzones, guayabanos, baluno, nangka, etc. I have rabbits, dogs, cats, and other animals.”

This natural setting was considered by NHCP in its design of the museum. “The structure, now two full floors, is almost completely surrounded by lightly tinted windows that reflect the sea and the trees,” said Diokno. “The exhibits do not block the windows and they enhance the surroundings.”

The Dapitan museum is part of an overall plan to modernize around 15 more local museums nationwide, including those of Loay in Bohol, Iloilo City, Naga City, Baliuag in Bulacan, San Juan and Quezon City.

The NHCP is also restoring 12 structures in Bohol and 16 in Cebu damaged by the 2013 earthquake. Local parishes and communities are trained on the maintenance of the restored structures and the ecclesiastical collections they contain.

“The modernized museums are envisioned to serve as dynamic learning hubs and tourist sites, with the installation of interactive facilities wherever possible,” the NHCP head said. “The modernization plan also includes the production of e-lessons on topics covered by the museums.”

“We employed interactive exhibits (games, 3D displays, light-and-sound tableaus, holograms, touch-screen terminals) to enrich the narrative,” she added. “One of my rules is that the farther away from Manila the museum is, the more technologically advanced its exhibits [must be] so as to expand provincial access to modern, interactive displays.”

Diokno explained that every museum is a collective undertaking. For the modernization of the Dapitan museum, she worked with the research team of Eufemio Agbayani together with researchers Cielito Reyno and Mona Lauro.

Red Root Artists’ Cooperative did the curatorial design (they won the bid) and carried it out with NHCP approval. Division chief Gina Batuhan and Diokno inspected the museum several times while in-house architect Cris Lustre of the Historic Preservation Division took charge of the structural aspect and site development, together with Cad, who knows the Rizal property like the palm of his hand.

“Julie Lluch’s pieces she created for us in Dapitan will undoubtedly attract more visitors,” said Diokno.   She added that Lluch is one of the country’s premier artists who has produced beautiful sculptures at NHCP’s other modernized museums like the bronze bust sculptures of Andres Bonifacio, Emilio Jacinto and Gregoria de Jesus in the Museo ng Katipunan, and the life-size statue of Rizal in Calamba.

Cad said that shrine’s visitors peaked at 23,000 last May. He said he expects a dramatic increase now that the museum has been upgraded.

This writer learned that on the day Rizal and his live-in partner Josephine left Dapitan in 1896, he burned the hut where he kept many of his secret documents. Some believe that all the contents of his library were consumed by fire. Some say the fire started a conflagration that burned the whole compound. I wonder how Rizal, in the less than five months that remained in his young life, ever looked back at those years of his exile in Dapitan.

Alma Cruz Miclat is the author of deluxe book “Soul Searchers and Dreamers: Artists’ Profiles.” E-mail her at [email protected]