A daughter’s story of losing and finding a long-lost father at Carnegie Hall | Lifestyle.INQ ❮ ❯ 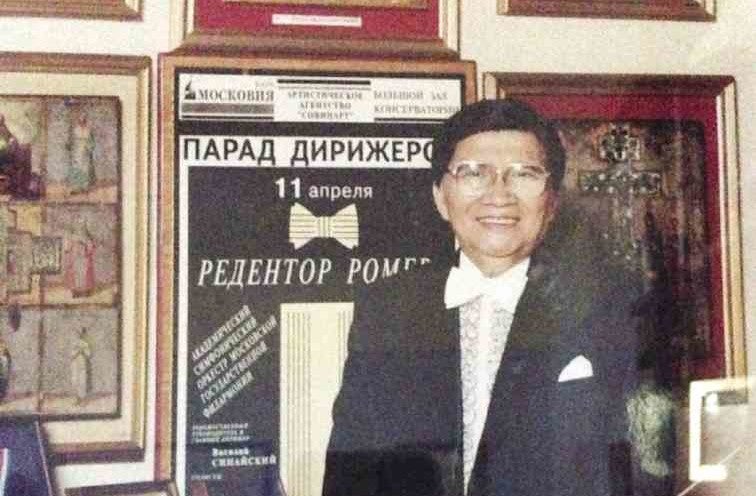 REDENTOR Romero sought a distinct sound that was sublime and transcendent.

NEW YORK—When my father, the symphony conductor maestro Redentor “Red” L. Romero, passed   15 years ago after a battle with lung cancer, I naturally assumed that his music would go with him.

I was, therefore, surprised upon finding out in May that the Philippine Philharmonic Orchestra—which he once guest-conducted and is now led by maestro Olivier Ochanine—would make its debut at Carnegie Hall, where my father appeared in the late ’70s as guest conductor.

The June 18 concert, billed as a joint celebration of Philippine Independence Day and a fundraiser to benefit typhoon victims in the Philippines, was to begin with Dmitri Shostakovich’s “Festive Overture,” followed by concertos featuring Filipino artists, the pianist Cecile Licad and the violinist Diomedes Saraza.

It would end with a finale featuring my father’s composition, “Philippine Portraits,” which was making its US debut as well—a joyous ode to his beloved country and a fitting tribute to an international career as a concert violinist and symphony conductor that spanned more than 40 years. In the words of Saraza who was quoted by NBC News, “No one has ever done that in Carnegie, actually playing Filipino music with Filipino musicians.”

I had no idea that this extraordinary concert was taking place, a historic first for the government-sponsored orchestra.

I learned about it the way most people find out about anything these days:  through Facebook. My husband Dan and I were having dinner when his phone let out a ping: a friend in Brooklyn had shared a link announcing the event. That my father would be featured proved to be an even bigger surprise.

There was no question my family and I would attend, including my children Eli and Amalya, who were very young when their grandfather died and never got to know their lolo or his accomplishments first-hand other than the family anecdotes I frequently shared. This was the first time they would be hearing something he had composed.

In some ways, it was a first for me, as well.

When dad died, I could not listen to any of his recordings without getting choked up, and leaving the room wherever his music was being played.

Whenever I heard his violin solos in particular, I would still see and hear the phrasing of his bow, his fingers piercing every note, each rest and beat a reminder of an irreplaceable loss.

I saw his face with his eyes closed, as his left ring finger would glide ever so close to his cheek, holding that string for as long as he could without letting go of his breath.

To make that happen, we would have to uproot ourselves from New York and live in Manila. Dan and I gave it serious thought.  At the time our careers were portable and our children were young.

However, it quickly became clear to us that living in two continents, let alone leading two lives—both my father’s and ours—would be unrealistic and ultimately, unsustainable.

As part of a running dialogue I had with my father in my head, because he was no longer around to hear me, I berated him for dying without putting a plan in place to preserve his music legacy.

He was, after all, famously organized, with a legendary attention to detail that bordered on the obsessive. His conductor’s scores were filled with his copious notes and markings. He kept meticulous record of everything he had ever done in his life, every orchestra he conducted, every newspaper clipping that mentioned his name, photographs of famous soloists who had appeared with him, including the late Duke Ellington who played under my father’s baton in 1969 during a tour of Southeast Asia.  I have a picture standing next to the Duke, a toothy if ignorant 11-year-old who had no idea who this icon was.

“How could you do this to yourself?” I once yelled at my father’s portrait that hangs in my home, dressed in tails and striking a conductor’s pose with a baton clasped between his  hands.

How dare you die on me!

But even Dan said of my father, “Tatay thought he would keep on going.”

So I stopped listening.

Years ago, when a neighbor invited Dan and me to her house for dinner, she took me by the hand as we walked in, sat me down on her sofa and announced, “I have a surprise for you.”

Before I could run away because I had already seen the familiar glossy red cover of my father’s book of arrangements of Philippine love songs, there was my friend on her baby grand, playing “Sa Kabukiran.” I had forgotten that I had given this book to her, and now I could barely breathe and stay in the same space as she interpreted my father’s sound beautifully.

My father had a specific sound: lush, bold, romantic and melancholy all at once.  It is the sound of a 15-year-old longing for the father who disappeared without a trace in 1945, just as the Pacific War was coming to an end. It was the last time dad would see his father alive, and he would spend the rest of his life trying to find out what happened to him.

Of my grandfather’s fate, rumors and divergent versions abound, none of them leading to the truth.

On the night his father disappeared, my father recalls being asked to play “Meditation,” the piece for violin and orchestra from Jules Massenet’s “Thais,” which was a favorite. My grandfather’s remains were never found.

Dad actually had a name for this sound, using the Tagalog term “libog,” a curious and indelicate use of a word that has no connection to music whatsoever and one that rarely comes to mind in polite company, unless it is the height of spring and one was an adolescent. It was, more than anything, an example of his wicked, if not irreverent, sense of humor, as well as his absolute belief in his work and who he was as a musician.

Yet anyone who knew my father, particularly those who performed under his baton, knew exactly what he meant. It was a sound that was sublime, transcendent, elevating listeners to heights of ecstasy and, if at all possible, leaving them up there, floating in the ether.

“Kulang sa libog,” he would exhort his musicians and soloists, male and female alike, whenever  fortissimo, espressivo and andante left the listener flat on the ground.

When, as a 17-year-old, I joined dad on his concert tour of Ostrava in the Czech Republic, Tashkent in Uzbekistan, Novosibirsk in Siberia and Moscow in Russia, I was impressed by how, despite the language barrier (but with the help of a few obviously like-minded musicians), he quickly learned the counterpart of libog.

Failing that, he also learned every curse word in their native tongue to coax the sound when the wave of his baton wouldn’t seem to draw it out from them.

As my family and I took our orchestra seats at Carnegie Hall on that balmy, summer evening, I held a copy of my father’s conductor’s score close to my heart. I wanted my father to be with us in spirit even if he wasn’t around to enjoy the moment.

Other than the excitement and anticipation of hearing his music after a long absence, I didn’t know what to expect. Would I feel the same way as I did when I first heard “Philippine Portraits” 40 years ago?

As I remembered it, the music was brash, colorful, celebratory, so full of life.  So was dad.

Could conductor Ochanine, whom I had never met, do justice to my father’s sound and bring the exuberance that would reflect his profound love for music? Would this new generation of mostly Filipino and Filipino-American concert-goers like what they would hear, and would there be a place, too, for my father in their hearts?

But out of all that, my true and biggest fear was how, after years of teaching myself not to expect his call on my birthday, or a call directing me to run over to the former Joseph Patelson Music House on 56th Street and get him another score, I would miss him all over again.

And of course I did. How could I not? The libog was inescapable and everywhere.

It was particularly palpable as the string section swooned through “Dandansoy,” a love song about leaving a loved one. As a violinist, my father always had a soft spot for the instrument, and as maestro Ochanine bent over PPO’s First Violins, it might as well have been dad all over again.

But this time, instead of feeling his absence, I felt his life coursing through me, a reminder that he never left, and had been there with me all along.