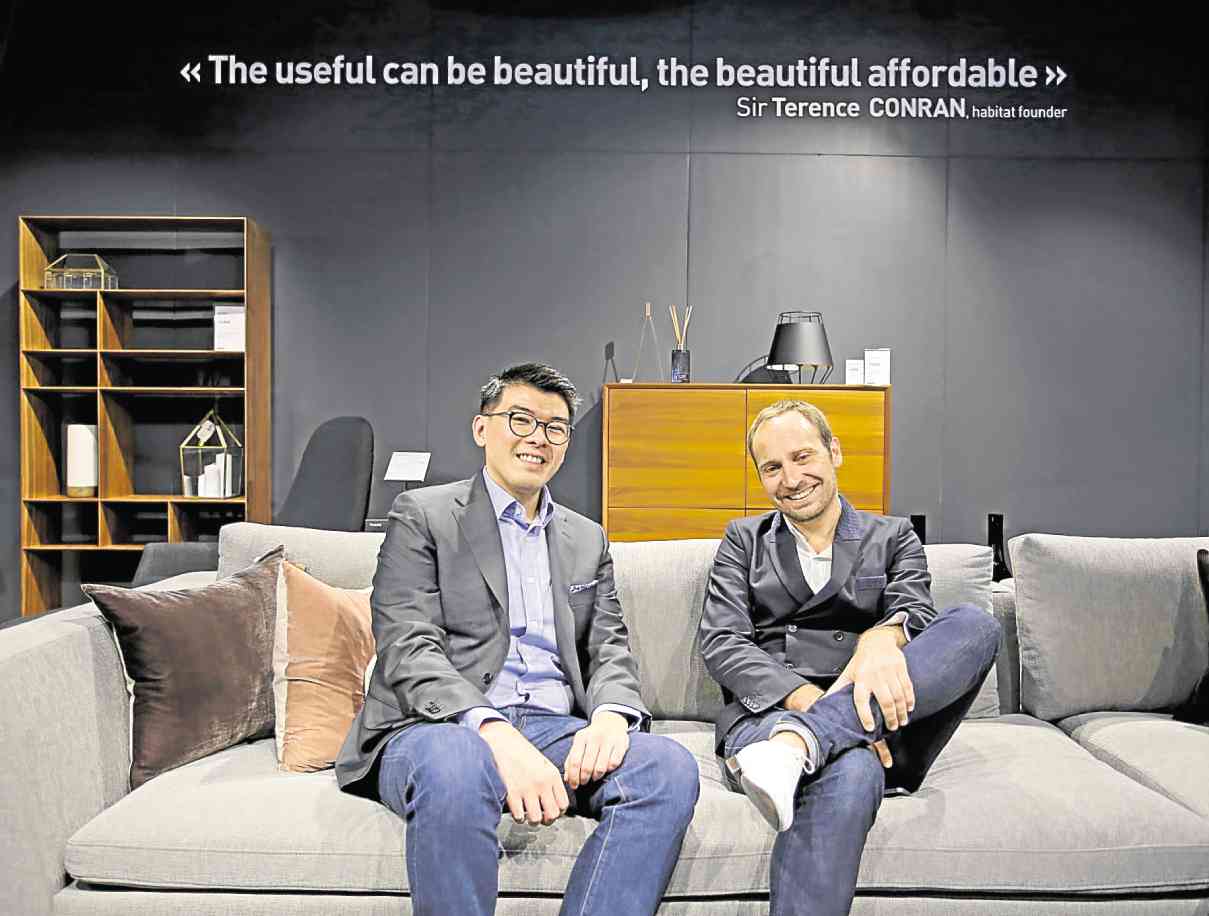 THE HABITAT Philippines managing director Walter Lim and Rémy Poirson, marketing director and member of the borad of directors of The Habitat

“We don’t do decorative products for nothing. We only produce functional products,” said Frenchman Rémy Poirson, looking sharp in a navy blue suit and white loafers.

Poirson was in Manila to launch The Habitat’s vibrant Spring/Summer collection, called Heliotropism, where distinct shades of blue and yellow are aptly used. Heliotropism, a peculiar behavior of some plants that turn to face the sun, features a whole spectrum of summer colors to bring the sunshine into your homes.

But these are not random colors put together. The collection is a reflection of French fashion sensibilities—that is, no more than three colors should be put together in one setup, Poirson said.

“That’s always been the French way, even when we dress. Otherwise, you’d look like a clown,” he told Inquirer Lifestyle.

Thus, yellow bowls are grouped with white and gray metal plates, or beige throw pillows are accented with blues or yellows.

The Habitat is selling a lifestyle by creating an atmosphere and a mood for each home. The utility and functionality are Scandinavian, then designed with inspirations from products all over the world.

That’s the reason, Poirson said, that their products fit everywhere: “They’re European, but their appeal is on an international scale.”

The Habitat offers everything a home would need, from the living area to the bedrooms and all the way to the kitchen. The kitchenware, designed by two-Michelin-starred chef Thierry Marx, are not just handsome pieces meant to make your kitchen aesthetically appealing. Chef Thierry knows how pots and pans must look in order to make maneuvering in the kitchen easier.

“The idea behind this collection—manufactured and designed exclusively with The Habitat—honors the essence of things: designing utensils for a universal kitchen, ensuring heat and time control, and providing tools that allow you to cook well, just like that,” Thierry said of his collection.

His mortar and pestle are made of marble, his oil decanter of blown glass, and his cutting board of solid beech.

The Habitat was founded in London by British gentleman Sir Terence Conran, who believed “a home should have a spirit, but most certainly a heart.” With its headquarters and design studio now based in Paris, France, its French principals have stuck with the Conran way of designing products—that they must be timeless but affordable.

“It’s so easy to make an expensive product. You can make a throw pillow and sell it for 200 euros. But that’s not The Habitat way. We sell throw pillows for around 50-60 euros. That’s a big challenge, especially for the designers that we have,” Poirson said.

One such designer is Robert Mallet-Stevens, a widely regarded French architect and designer who passed away just after World War II. His classic chairs, made of black matte painted metal with distinct curves, and armchair made of leather with sharp edges, is still the benchmark for The Habitat’s chair designs to this day.

Exclusive European-made furniture and décor created from Habitat’s own Design Studio also take the spotlight, such as the best-selling Ribbon lamp, a table lamp made of powder-coated steel; the Parasol lamp, with a lacquered metal-based lampshade; the Ikebana queen-sized bed, made of varnished oak veneer particle board; and reeditions of the Metropolitain, pure white porcelain crockery with black and silver borders.

Conran, naturally, has his own place in the 1,500-square meter store: featured are his Parnasse creamer, plate, jug, teacup and saucer, teapot, sugar pot, teaspoons and dessert plate, all made of white porcelain.

“The collection gives pride to lemons, the fruit of the South of France, bursting with life with a brilliant yellow that is an ode to summer,” said Habitat Design Studio creative director Pierre Favresse. “This can be seen in our desire to gather the family together in the countryside for a summer weekend, share Sunday brunch in a garden, or have a picnic in the park or on the beach.”