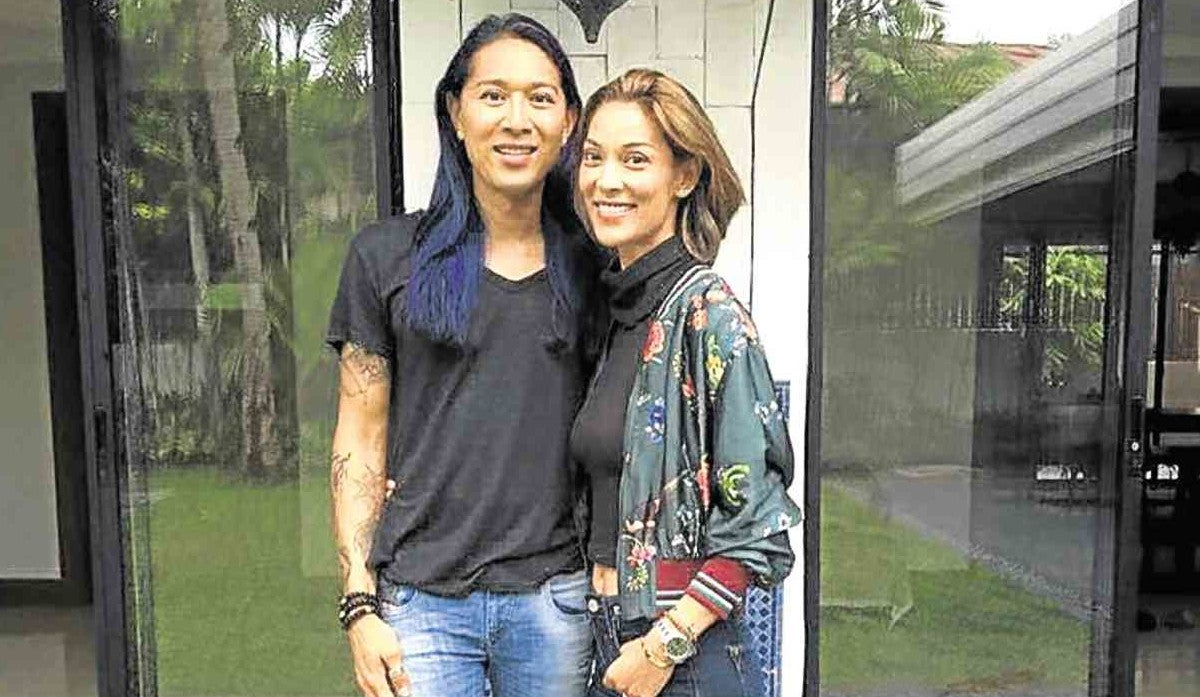 LOVE IS LOVE: Angelina and her “rock,” as she identifies wife Joey Mead

The last time this writer saw hotelier-entrepreneur Ian King and his celebrity wife Joey Mead was at the wake of his father, Archimedes, Archie to many, who died in a helicopter crash on July 4, 2015. The couple looked calm.

The news of the crash grabbed headlines not only because of the suddenness of the tragedy, but more so because of the older King’s stature in business and society, and because the other passengers were also socially visible.

A year later, social media is agog again, this time over the younger King’s coming-out photos posted on his Instagram account, hailtothe_queen_.

The different posts show the couple, who was married in 2011, twinning in skinny jeans and heels, and in a shoe store trying on matching spiky stilettos. In a latest selfie posted on Monday afternoon, Angelina Mead King, as Ian now identifies himself—and who now has close to 25,000 followers—wears a pair of mirrored RayBan aviators. The caption: “First day out <3 it’s both scary and surreal! #transgender #betruebeyou #girlslikeus #noh8.”

This wasn’t about gender-bending fashion or transvestism.

“A transvestite is a man who likes to dress up in women’s clothes—usually underwear—but not necessarily gay. He can have a family and a straight sexual preference,” explains a psychologist.

Angelina used the term “transwoman,” which a psychologist defines as a “man transitioning to be a woman or lives like a woman before surgery.”

(This is not to be confused with “transgender,” which, unlike the transsexual, is a person whose sense of being a male or female, mind-set and behavior do not adhere to what society expects from the gender they were born with. A man can still be interested in women, but likes to wear makeup.)

Just as the late King received an outpouring of tributes last year, Ian was equally deluged with good wishes and support from netizens. Publications worked overtime for the story. Meanwhile, those close to Ian protected his privacy.

To the baby boomer and Gen-X generation, Ian is seen as the grandson of Angelo King, motel chain founder, glass tycoon and philanthropist, who has donated billions to education. His late father, Archie, was also a staunch supporter of Gawad Kalinga, the antipoverty foundation; an adventurer; and to close friends, an aficionado of unique sports cars.

He also set up RWB (Rauh-Welt Begriff or Rough World Concept) Manila, which strikingly transforms the Porsche and tunes it up.  In short, he likes to give cars makeovers that make heads turn, and which car devotees lust after.

“We like to deliver stuff that no one has seen yet, no one has done yet. We want to bring fresh ideas to the table,” Ian said in an episode of the TV show “Game Changer.”

It seems ironic that Ian is in the business of cars and fixing them which, according to social stereotyping, is considered a “guy thing.” Yet, in the past few years, Ian flaunted his feminine traits to people he was comfortable with.

Relatives thought Ian’s long hair and the dark nail polish seemed harmless, as if he were taking to Goth fashion, or they just looked the other way out of deep respect.

(Ian politely declined to be interviewed, explaining, “I’m not ready yet.”)

Despite the growing recognition of various gender classifications and acceptance of unconventional romantic preferences, the fear of being stigmatized still continues.

Coming to terms with people’s perceptions of you and expectations from others can put a lot of pressure on the individual.

Then again, these are different times. Regardless of all these labels—transwoman, transsexual, transgender, etc.—people’s outlook and expression today are more liberal, no longer pigeonholed to conventional gender roles.

What was considered feminine before, such as indulging in grooming and fragrances, is now acceptable to men, on one hand.  On the other hand, women are taking up once-masculine professions such as joining and excelling in the police force, or flying a commercial jet.

The gender boundaries are shifting now more than ever.