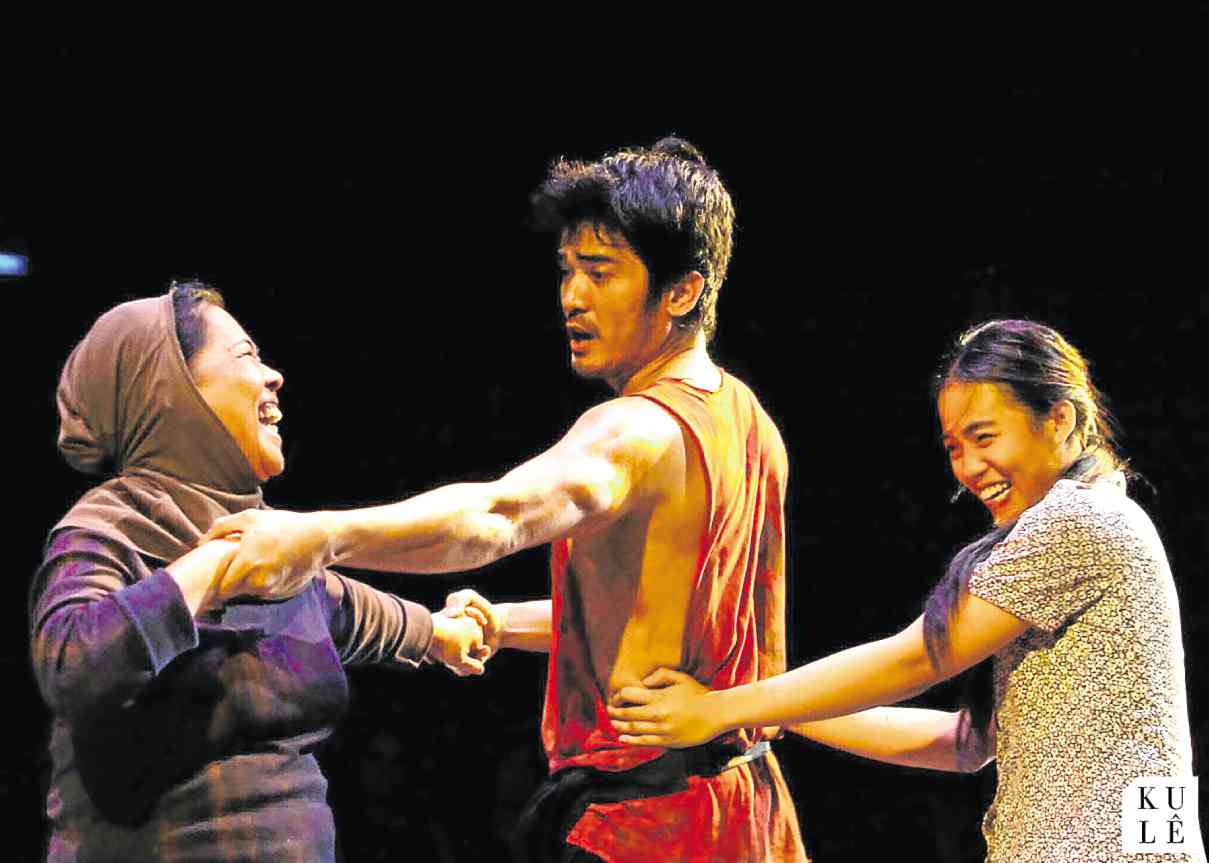 PEEWEEO’Hara, Al Gatmaitan and Chase Salazar in UP Playwrights’ Theatre’s “The Female Heart,” directed by Banaue Miclat-Janssen PHOTO FROM UP COLLEGIAN

There’s more to this play than its female heart

DESPITE its title, UP Playwrights’ Theatre’s “The Female Heart,” written by Linda Faigao-Hall and directed by Banaue Miclat-Janssen, delves into more than just the “female heart.”

It attempts to dissect the intricacies of the Filipino soul and manages to hit close to home because of its focus on that one aspect that many foreigners have either admired or been baffled about us: the Filipino’s all-consuming, self-sacrificing love for the family.

Set in the 1980s, the story is about Adelfa (Chase Salazar), an otherwise smart, determined girl who, having finished only high school and unable to get a job, sells herself as a mail-order bride to Roger (Mark McKeown), an American twice her age with anger-management issues. The move, meant to literally remove her family from their garbage-made home in Smokey Mountain, is the last resort for her after all possible doors have apparently been closed.

Faigao-Hall’s straightforward narrative chronicles the family’s struggle, from the closing of the junk shop that fueled their livelihood, to older brother Anghel’s (Al Gatmaitan) descent into strip dancing and, eventually, tragic illness, to Adelfa’s inability to land even the lowest-paying clerk job.

If this had been set today, her spunk and drive to learn could have given her a shot at a call-center job.

The all-too-familiar storyline borders on soap-operatic grimness, but it’s the hope animating each character that brings light and exuberance to the darkness. Poverty makes this family stick together against all odds, making their devotion to each other a source of envy and wonder for the American salesman whose wife had dumped him because he could not afford her high-maintenance life.

Together, this family dares to dream of a better life. As Anghel says, “The minute you stop dreaming is the day you die.” And the authenticity by which this family finds enormous joy in the smallest items—like an untouched bar of soap or the last bits of a luxury-brand facial cream they find in the rubbish —can touch the forever-struggling Pinoy’s inner core.

The high-school valedictorian Adelfa’s plans of transferring her family to a clean room in Pasay by getting a job as an SM saleslady is doomed from the start. The unreality of it and the trainwreck that will dash that particular dream are agonizing; still, that same naïveté, combined with a steely determination, makes the audience want her to win.

The love that initially makes Adelfa succumb to Roger’s every fantasy, and ultimately transforms her into a ruthless negotiator, comes from the unconditional support she gets from a family member. And this time, it’s not the traditional mother-children dynamic that is at play.

While the purest bond is between the siblings, it’s Nanay Rosario who turns out to be the most pragmatic—finding excuses to justify her kids’ entry into the sex trade and a loveless marriage in order to survive. Yet Peewee O’Hara’s combination of subtle rapacity and an aging woman’s last hurrah to find enjoyment comes across as almost forgivable. (Sheryll Ceasico alternates in the role.)

Miclat-Janssen’s direction and the cast performances make these characters all too human, overcoming the temptation to succumb to stereotypes. At times, Salazar pushes that ingeniousness and hard-sounding, put-on American accent just a bit.

The extent that McKeown bares Roger’s injured inner animal and neglected little boy makes his vulnerability sympathetic, too—which makes it difficult to see him as the villain in the story. While his manipulation and domestic rape of Adelfa are deplorable, McKeown does let you see the roots of his torment. And when the compassionate, saintlike, understanding Adelfa cannot give him the same devotion she gives her family, the scene throbs more with tragedy than with a sense of long-deserved comeuppance.

This production breezes through at less than two hours. While one can appreciate the economy of a script that doesn’t pull any punches, or the intensity of the performances that glues you to what’s happening onstage, the direction could have also taken the time to just let the scenes and the aftermath of the character interplay linger.

There is much to take in here, but the scene changes are sometimes too quick, and the clutter of the props being put in place or taken out can be distracting. The presence of some audience members on the stage itself (the staging is theater-in-the-round) is frankly a bafflement and adds nothing to the play; space that otherwise could have been put to good use seems wasted.

Still, this 30-year-old story is as timely and relevant as ever, with unseen and unheard masses of our people continuing to toil in poverty despite so-called economic growth and the rise of a new and younger middle class.

Decongest that theme from the old material, let it breathe— and, just like the sight of a family fleeing the hellhole of Smokey Mountain, it still pricks the heart.