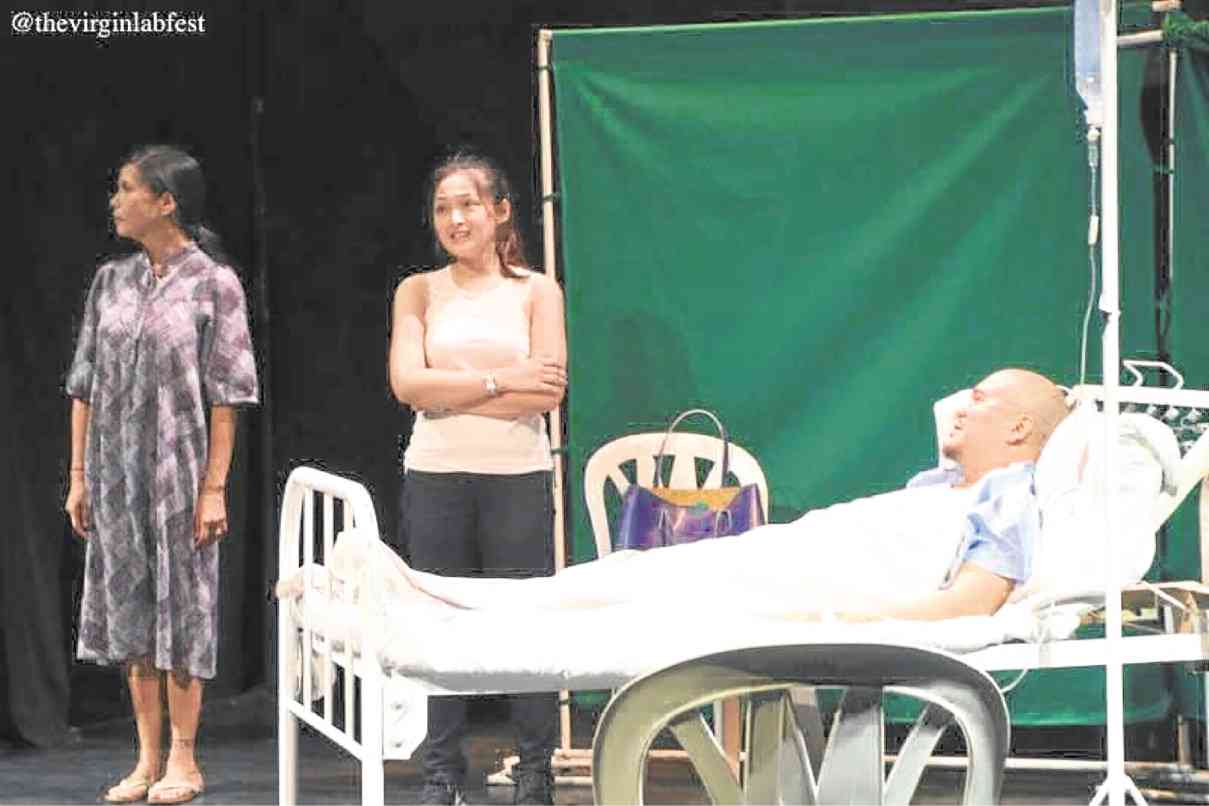 It was on a rainy Wednesday afternoon, June 29, when 23-year-old playwright Soc delos Reyes lost his virginity, so to speak, when his first-ever play to be staged debuted at the Virgin Labfest 12 (VLF 12)—ongoing at the 250-seater Tanghalang Huseng Batute (Experimental Theater) of the Cultural Center of the Philippines until July 17.

“It’s a dream come true,” Delos Reyes said after seeing his play come alive on stage before a real audience. “Overwhelming, and at the same time it’s nakakakaba (nerve-wracking). I was sweating all over during the show.”

He confessed: “This was my fourth piece submitted to the Labfest.”

Delos Reyes was part of the Labfest’s writing fellowship program in 2012—a mentoring component in which selected participants learn the rudiments of playwriting under the guidance of playwright and Tanghalang Ateneo artistic director Glenn Sevilla Mas.

His previous three plays all had male characters, but for “Dahan-Dahan,” he created two female characters with strong personalities—one a high-school senior coping with her father’s battle with cancer, and the other her headstrong aunt.

A Creative Writing major at Ateneo de Manila University, Delos Reyes said he initially wanted to write short stories, but after attending a playwriting class under Mas, he decided to shift gears; he began acting with theater groups in Ateneo and never looked back.

Another debuting playwright in Set A is May Cardoso, whose play “Ang Sugilanon ng Kabiguan ni Epefania,” directed by Charles Yee, is an adaptation of Ian Rosales Casocot’s work of speculative fiction titled “The Sugilanon of Epefania’s Heartbreak.”

The tale of Epefania, a Visayan country girl who becomes obsessed with the most handsome boy in the village, is boisterously recounted to a young man by two drinking buddies at a sari-sari store, in dialogue that mixes Filipino and Cebuano. The story transcends time and legend to spark a pivotal realization in the lovelorn young man.

Cardoso said the experience of getting her play staged was “humbling.” The original text underwent eight revisions, all with her approval. She was still making changes during rehearsals, until she realized that, as with a child, “it had to come to a point when you needed to let go and let the child grow on its own.”

At “Sugilanon’s” first staging at 3 p.m., Cardoso was a bundle of nerves, but the audience’s enthusiastic response to the play eased her fears. “It’s very encouraging—the way the audience received it makes me feel that all our efforts were definitely not wasted.”

She was also relieved that the technical aspects went smoothly. “The storytelling depends much on light and sound,” she said.

Cardoso is a Creative Writing major from UP Diliman and a writing fellow in the 2015 VLF.

Ma. Cecilia de la Rosa’s “Ang Mga Bisita Ni Jean” is the opener for Set C; how it was put together was an eye-opener for the newbie playwright, who before this was a published and    awarded poet in Filipino.

“I was just so amazed by the process the play underwent from paper to stage,” said De la Rosa. “Pinapanood ko ang mga actors, si direk Ariel (Yonzon), the stage manager, at sa loob ko sinasabi ko, ‘Ang galing nila!’ And then I saw the stage design, and that simply completed the magic. I’m happy I got to work with them.”

The play is about a former rebel assessing the consequences of her decision to leave the cause on her life and relationships. When it finally opened, “it was as if it wasn’t my play anymore,” said De la Rosa. “I sat there, laughing and crying a little, an audience to my own play.”

Over at Set D is the first play by the well-known writer of speculative fiction Eliza Victoria. Her entry, “Marte,” directed by veteran actor-playwright George de Jesus III, is a story set on planet Mars, about ordinary workers and the injustices they endure even in a so-called new world.

“With fiction, the reader is my collaborator,” said the 29-year-old Victoria. “Writing a play is a whole different adventure. It was definitely intimidating to see my words taken so seriously, but also amazing to see my little story literally breathe and cry and live onstage. I’d never seen a story become so tangible.”

Also in Set D is the play “Hapagkainan,” written by Rick Patriarca, the youngest featured playwright in this year’s Labfest at 20 years old.

But his play “Hapagkainan” was chosen as one of the 12 new plays for this year’s Labfest, out of a record 197 entries. The play is a savage satire on the picture-perfect suburban Filipino family—inspired, said Patriarca, by a TV ad of a brand of pancit canton: “I wrote it during the Christmas holidays, during a lull in a family gathering with relatives.”

Patriarca’s writing gained an early vocal admirer—the multiawarded playwright and filmmaker Chris Martinez, who  agreed to direct the play after reading the script. Martinez recently wrote on Facebook: “A new kind of comedy is born, the ‘Patriarcan comedy.’”

The experience of seeing his first play fleshed out onstage was both daunting and thrilling, said Patriarca. “The characters I wrote suddenly felt like real people.” It’s also a big boost to his writerly dreams, since he has a few more plays in his baul. “I write one-act plays for pleasure,” he said.

His fascination with playwriting was triggered years ago after he read an anthology of plays that won in the Carlos Palanca Memorial Awards for Literature. Now he’s in the same festival that, over the last 12 years, has added many more new prize-winning plays to the canon.

*ALL PHOTOS FROM THE CCP/VIRGIN LABFEST FB PAGE