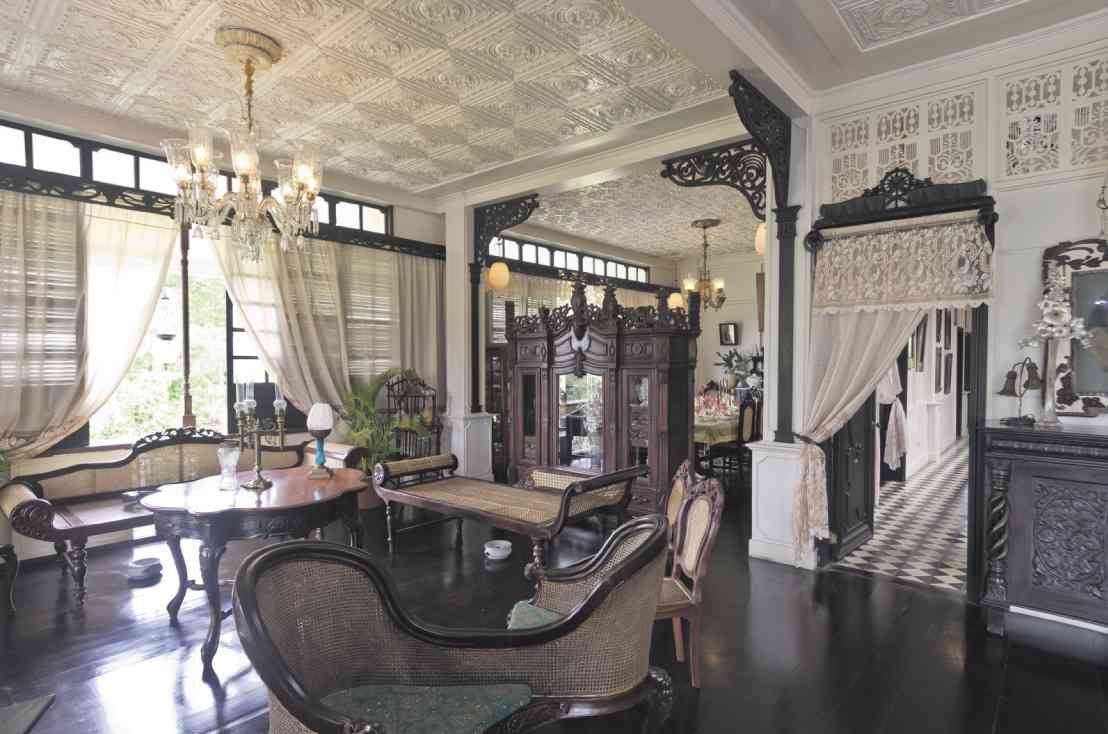 19th-century home is an authentic museum—without a single fake

FROM the outside, Casa Consuelo Museum looks like a debutante’s cake, dressed in deep pink fondant, covered with intricate doily patterns.

The latest addition to the attractions at Villa Escudero Plantations and Resort, it displays the mementoes of the founders, Arsenio and Rosario Escudero, who built their fortune on the coconut plantation, and the antiques of their son, Conrado Escudero, or Ado to friends.

“This is the only house that houses authentic antique furniture. There isn’t a single fake here,” declares Ado, the villa’s president and general manager.  Important architectural details were salvaged from an ancestral home in Pampanga.

The original house was built in the late 19th century by a mestizo, Don Esteban Gomez, then mayor of Angeles, Pampanga, and his wife, Doña Josefa Pamintuan.

According to Escudero, the Pamintuan family owned the tracts of land which would become Clark Field.

In its halcyon days, this house in Angeles stood out for its delicate rococo tracery surrounding the porch.

Culture historian Martin Tinio Jr. explains to Inquirer Lifestyle that the house embodied the floral style, the architecture popular at the turn of the 20th century.

The flamboyance was born of the people’s weariness with simplicity and geometry.  The balcon looked like a large piece of lacework, covered with nothing but intricately carved transoms, arches and ventanillas that evoked transparency, a characteristic of tropical architecture.

Escudero convinced his older sister, Doña Consuelo, to buy the house and transport its delicate woodwork, piece by piece, to the villa in Tiaong, Quezon.

Every carved frame was numbered, dismantled and reassembled on site. Since the original hipped roof of the house was in decay, Escudero ordered roof tiles from Spain.

The harlequin flooring was redone by the famous tilemaker, Machuca.

The façade’s original paint was pulverized red, but it faded into fuchsia.

The original house had a single flight of stairs.

For drama Casa Gomez is built with two long flights that meet at the balcon. Open on three sides, the balcon opened to a view of a well-manicured garden.

Tracery transoms serve as vents over the room doors to allow air flow. Undulating tracery on the little arches, and the corbels and valances in the living room add grace to the space. Pressed tin ceilings, popular in North America in the late 19th century and early 20th century, add sophistication.

The zaguan, the entrance hall, and entresuelo or ground floor have been turned into a cavernous lobby which displays antique carriages and carrozas. The rooms exhibit Don Arsenio’s collection of canes and photographs, and Doña Rosario’s miniatures and other souvenirs from travels.

The top floor recreates the romance of the turn of the 20th century. It is laden with such status symbols as the floral narra frames by sculptor Isabelo Tampinco, the carved four-poster bed by the Chinese maker Ah Tay, the baul mondo or the traveling trunk, bentwood beech furniture made by August Thonet of Germany and Carlos XIII chairs and a rare, circular Bourne chair at the foyer.

Some of the important pieces are the cabinets saved from the original Escudero mansion in San Pablo, Laguna. The house was razed to the ground after the war.

Asked how Casa Consuelo differs from other house museums that recreate the genteel lifestyle in colonial times, he proudly replies, “All the furniture here is well made!”

Casa Consuelo is just one of the many attractions of the Escuderos’ 900-hectare property, which was originally a coconut plantation. After studying agriculture at Cornell University, Escudero introduced agribusiness to the farm, instead of managing it in the feudal way.

He also thought of turning part of their property into a heritage village, such as the Colonial Williamsburg, which features historical tours and dining experiences, in Virginia.

“Since my parents and I were collectors, I thought I would make something out of them,” says Escudero.

He recalls being surrounded by beautiful objects while growing up. Whenever his parents visited small towns, they always brought home something for the house. In those days, every house had a bodega.

The Escuderos brought gifts and asked the owners if they could look at their bodega. The owners would tell them that it was filled with junk. The couple would say that that was what they were looking for. The old objects were then repaired, and have since found their places in the Escudero museum.

“They didn’t acquire these objects by purchasing them. Their style was to cajole the owners to get the pieces. That’s why people thought they were rich,” says Escudero in Filipino.

At first, the siblings were reluctant to invest in the new idea. Nonetheless, Escudero did the cooking, fixing up the original museum, promotions and entertaining.

As Villa Escudero became successful, his mother urged him to form a corporation to prevent family feuds.

Today, it has become a must destination not only for the cultural experience amid the lush scenery, but also the fresh Filipino cuisine. Lunch is literally served under the waterfalls, as the main attraction. To save on energy and money, the kitchen uses rice hulls for cooking.

The villa attracts an average of 500 to 1,000 visitors a day.  On weekends, the staffers, trained by Nestor Cortez, the former dance master from Ramon Obusan Folklorico, present a well-rounded song-and-dance program.

Every year, the villa goes to town with an authentic fiesta to commemorate the Feast of the Ascension of Christ. This year it was celebrated with a Latin Mass, symphony orchestra, three choirs, and a guest singer. “It was as if you were in the heavens,” says Escudero.

Villa Escudero has also become an ideal place for theme weddings. A bride can feel like a princess riding on the carriage.

There’s no one quite like Ado Escudero, who can turn fantasies into realities.