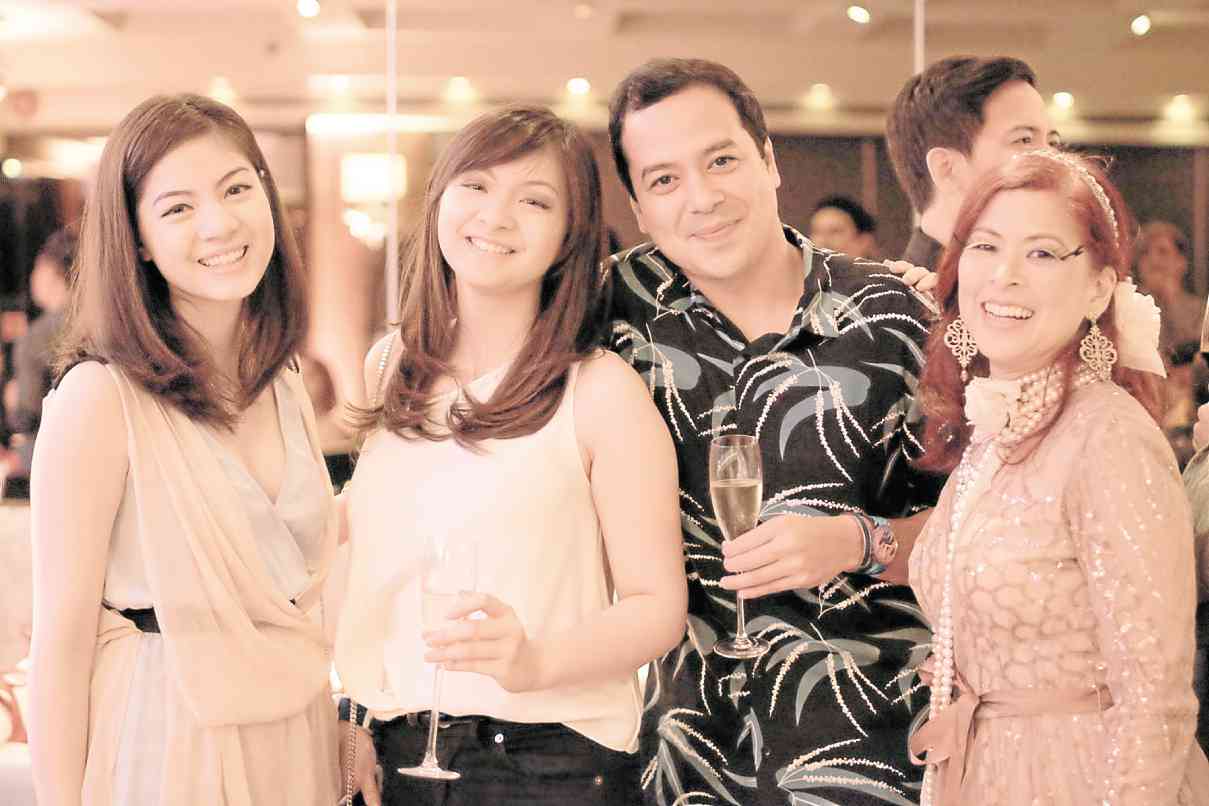 I truly enjoy the Swatch parties that Swatch Philippines grand dame Virgie Ramos throws—whether it’s the birthday of one of the Swatch endorsers or the launch of a new collection.

Her most recent party was to celebrate the latest achievements of superstar actor John Lloyd Cruz. For his starring role in the movie “Honor Thy Father,” John Lloyd won two awards here and abroad.

When John Lloyd returns from his extended trip to New York and beyond, Tita Virgie will host the private screening of “Honor Thy Father,” and that will surely be another fun affair.

Sala Restaurant was transformed into a Pop-It-Up surprise dinner venue for John Lloyd and 40 chosen guests.

Chef Colin McKay personally made sure the food was exceptionally delicious. Gino Gonzales created the perfect ambiance for the elegant dinner.

As the host, honoree and star of the night, John Lloyd also sang and danced for the guests all night. He likewise celebrated his birthday that evening, along with Kyle Tinga, the pretty daughter of Freddie and Kaye Tinga, who turned 21.

To celebrate my hubby Dennis’ own birthday last weekend, we flew to Balesin Island Club and enjoyed the last days of clear skies and sunny weather. We also checked out the new Aegle Wellness Center at the resort’s Mykonos Village. Amanda Griffin-Jacob also celebrated her big 40 on the island.

As an extended wedding anniversary gift to ourselves as well, Dennis and I checked out the One-Day Taste of Total Wellness program arranged by Dr. Ben Valdecañas. An authority in the field of sports and regenerative medicine, Dr. Ben heads Aegle’s acclaimed medical team together with Dr. Claude Chauchard, world-renowned anti-aging and preventive medicine specialist.

Available for all Balesin members and guests, Aegle’s natural wellness programs begin with diagnostics, then flow naturally into treatments intended to detoxify and energize.

There are also four-day and seven-day programs at the Aegle Wellness Center in Balesin Island Club as well as The Alphaland City Club.

The partnership gives Million Milers and Premiere Elite members with existing 200,000 Miles a four-night “Getaway Package” for two at the exclusive island. The package includes four villa nights, four vouchers with P5,000 worth of food and beverage credits per day per person, and round-trip tickets from Manila to Balesin.

Milers can redeem the four-day island getaway after fully completing a redemption form and providing a copy of a valid ID with signature through e-mail: [email protected].

Members are also required to coordinate directly with Balesin Island Club for flight and villa availability through [email protected].

Extraordinary is one way to describe Grohe’s private gathering, as respective masters from various fields got together in a glamorous celebration dubbed as Masterworks.

Starting off the launch was a ceremonial ribbon-cutting to officially open the showroom’s doors to the public.  William Belo, Wilcon Depot chair, was joined by honored guests Alpha Ang, general manager of LIXIL Water Technology, Audrey Yeo, Grohe VP for marketing, and Michael Hasper, chargé d’affaires of the German Embassy.

Will Devaughn and Julz Savard were the program hosts.

Guests were treated to an exceptional symphony from the Manila String Machine, which performed simultaneously with the Philippine Ballet Theatre while in sync with the live water spectacle using Grohe water technology.

Another highlight of the event was the live painting done by Jackie Manzano. Her masterpiece was inspired by Grohe’s tagline, “Pure Freude An Wasser,” which directly translates to “pure joy of water.”

The affair was also graced by the presence of the country’s pride, international musical theater star Lea Salonga. As the night’s Master of Song, she captured the hearts of the crowd with her world-class talent and rightfully embodying the international excellence that Grohe is known for.

Desigño Atelier is a Wilcon Depot specialty store that houses its most luxurious brands. If you are looking for ways to enhance your home experience, you may visit its branches at L35B B11 Green Acropolis Village, Bagumbayan, Quezon City; or 5/F Wilcon IT Hub, Chino Roces Ave. Ext., Makati City.

Speaking of water, waterscape was one of the themes of the recent exhibit of master photographer Rupert Jacinto. This time, the artist-photographer mounted “Freudian Dream,” a mixed-media artworks exhibit at the Diplomatic Hall, Grand Ballroom of the Marriot Manila, the major sponsor.

The event was in support of the Love-a-Parish program of Sto. Niño de Paz Chapel in Greenbelt 5.

Rupert will be busy these coming months for his annual Faaabvlous exhibit on Nov. 7.