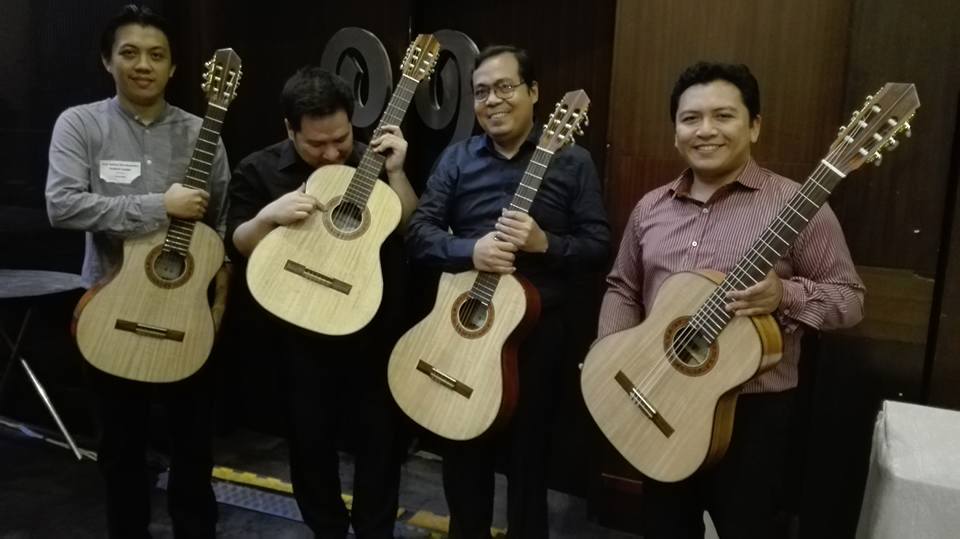 A team of musicians, engineers and wood experts has raised the country’s guitar-making industry octaves higher through a project called “Gitara ni Juan.”

Conceived during talks of collaboration between University of the Philippines College of Music (UPCMu) Dean Jose Buenconsejo and Department of Science and Technology (DOST) Undersecretary for Research and Development Amelia Guevara, the project was bankrolled by the DOST’s Philippine Council for Industry, Energy and Emerging Technology Research and Development (PCIEERD).

“Gitara ni Juan addresses the problems relating to manufacturing inconsistencies, intonation, sound quality and playability in locally made guitars,” said Nathan Neil Manimtim, the project leader who worked in fine harmony with team members from the UPCMu, the Electronics and Engineering Institute and the DOST’s Forest Products Research and Development Institute.

An assistant professor at the UPCMu, Manimtim said he was “sick and tired of recommending imported entry-level guitars to students.”

But he had no choice because majority of the locally made starter guitars were, he said, “out of tune when played on higher frets” and some also had weak resonance.

He said this was because the six-stringed instruments had bodies made of cheap lumber. Wrong dimensions and scale length also adversely affected sound quality. He attributed such problems to the lack of a compendium of standards for design, consistency, intonation and stability in the local guitar-making industry.

The Gitara ni Juan project, he said, set the goals of refining the elements and process of guitar-making in the country, as well as producing low-cost beginner guitars following modern techniques and using the finest woods, selected from the country’s indigenous trees instead of cheaper, substandard varieties or inappropriate imported woods.

It will not only help to boost local luthiery by producing good quality guitars that are affordable and accessible, but will also amplify the promotion of the country’s wood industry, according to the developers.

After an 18-month run that kicked off in December 2014, the team finally completed in May an ensemble of 12 prototype guitars.

Manimtim said they were delighted that music professors from leading colleges rated the guitars as superior to a first-rate starter guitar.

“According to the evaluators, the quality of the prototype is almost comparable to a recital classical guitar,” he said.

The Manila Guitar Quartet, of which Manimtim is a member, recently debuted the Gitara ni Juan prototypes when it serenaded guests at the PCIEERD’s 6th anniversary celebration in Clark, Pampanga province, with Filipino songs as well as some more contemporary pieces.

PCIEERD executive director Carlos Primo David said the country has a rich history of guitar-making spanning back to the Spanish era. As the fundamentals were passed on from generation to generation, however, the craftmanship had deteriorated.

“The intervention of the DOST is in terms of relearning the guitar-making process, from the type of wood used to the construction,” David said.

The researchers, he said, also produced a manual that could be shared with other luthiers.

The first phase of the project entailed visits to guitar factories to study how the instruments were being crafted in different parts of the country. As it turned out, there were no standards for luthiery in the Philippines; it was a case of “different strokes for different folks.”

The team also had to study what types of wood would make good guitars from among the country’s more than 3,000 tree species.

“We analyzed the properties, grains, density and hardness of the woods,” said engineer Crisron Lucas.

They eventually learned that Acacia mangium, big-leaf mahogany, bagras, river red gum, gmelina and mango wood were among the perfect substitutes for imported wood. Five of these wood types were used to fabricate the prototypes, Lucas said.

David said the PCIEERD would pitch the Gitara ni Juan brand in the market and produce more guitars for sale to the public.

He said the project would be expanded to the rondalla, the traditional ensemble of string instruments that include the bandurria, laud and the Mexican guitarron.

“We want to bring the rondalla back to our high schools,” he said. TVJ