A gender glossary for our time | Inquirer Lifestyle ❮ ❯ 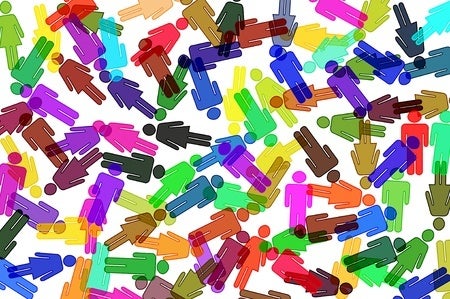 A gender glossary for our time

Androgyne—Person appearing and/or identifying as neither man nor woman, presenting a gender either mixed or neutral

Bisexual—A person who has significant romantic, emotional, physical and sexual attractions to members of both sexes. The frequency, intensity or quality of attraction is not necessarily directed equally toward both sexes.

Butch—A person who identifies as masculine, whether physically, mentally or emotionally. Butch is sometimes used as a derogatory term for lesbians, but it can also be claimed as an affirmative identity label.

Drag—Refers to people who dress in a showy or flamboyant way that exaggerates gendered stereotypes, often for entertainment purposes. “Drag” is a term that is often associated with gay/lesbian communities and is often replaced with “Drag King” and “Drag Queen”; some people who perform professionally outside gay/lesbian communities prefer the term “male/female impersonator.”

Dyke—Although once used negatively, this term has been reclaimed by some in the LGBT community to refer to lesbian or bisexual women.

Fag hag—A term primarily used to describe women who prefer the social company of gay men. While this term is claimed in an affirmative manner by some, it is largely regarded as derogatory.

Gay—A man whose primary romantic, emotional, physical and sexual attractions are to other men. This term can also be used to apply to lesbians, bisexuals, and on some occasions, be used as an umbrella term for all LGBT people.

Gender identity—A person’s internal and psychological sense of oneself as man, woman, both, in between, or neither.

Heterosexual—A person who is romantically/sexually attracted to or involved with members of a different gender; also referred to as “straight”; a term people apply to themselves because they feel it represents their basic sexual orientation, even though they may occasionally experience attraction to people of their own gender

Intersex—A person who is born with physical and/or chromosomal features in which sex characteristics usually considered belonging to distinctly male or female bodies are combined in a single body. The term “hermaphrodite” is widely considered to be outdated and offensive. An intersex person may or may not identify as part of the transgender community.

Lesbian—A woman whose primary romantic, emotional, physical and sexual attractions are to other women

Queer—Usually used to refer to the complete range of nonheterosexual and noncisgender people, and provides a convenient shorthand for “lesbian, gay, transgender, bisexual.” It is important to note that as this is a reclaimed term that was once used widely in a pejorative way, some people may feel uncomfortable with it. It is also important to note that not all transgender people see transgender identities as being part of the term “queer.”

Sexual orientation—How one thinks of oneself in terms of to whom one is sexually or romantically attracted. Orientation is not dependent on physical experience, but rather on a person’s feelings and attractions.

Transgender—Used both as an umbrella term and as an identity. Broadly, it refers to those who do not identify or are uncomfortable with their assigned gender and gender roles. As an identity the term refers to anyone who transgresses traditional sex and gender categories.

Transman—An identity label sometimes adopted by female-to-male transsexuals to signify that they are men while still affirming their history as females.

Transsexual—People who feel that their gender identity is something other than their biological sex. Some transsexuals choose to use hormones and/or have an operation to change their physical anatomy to be congruent with their self-perception.

Transwoman—An identity label sometimes adopted by male-to-female transsexuals to signify that they are women while still affirming their history as males.

Transvestite—Someone who dresses according to the social norms characteristic of a gender identity that is something other than their biological sex. This may be a behavior that is expressed only at certain times and is independent of sexual orientation.